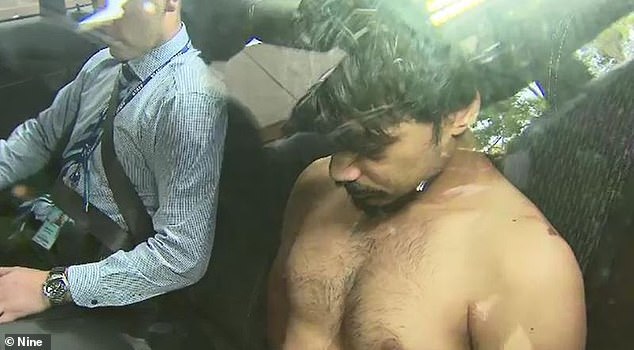 A grandmother who was severely assaulted in front of a Melbourne church and left for dead on the sidewalk has forgave her assailant, who was handed a five-year prison sentence.

On March 13, 2021, Amrick Roy assaulted Penelope Katsavos, 79, as she unlocked the doors of the Greek Orthodox church in South Yarra in preparation for the morning service.

Roy, 27, came up to her at 6 a.m. while she was on the church steps clutching a shopping cart with food, cash, and her phone. He seized the trolley and yelled at her.

She received a blow to the face from Roy and struck her head on the concrete stairs as she tumbled to the ground. He left Ms. Katsavos unconscious after stealing the trolley and running away.

At 6.30 in the morning, a municipal worker discovered her, and she was transported to the hospital with a shattered hip and broken wrist, as well as scrapes and bruises all over her face.

The County Court of Victoria was informed on Friday that the man’s false statement to police that the elderly lady had struck him first was probably caused by his “overwhelming humiliation.”

He had used synthetic marijuana and consumed alcohol earlier that evening at Revolver nightclub, the court was informed, and was in a psychotic condition when he committed the offense.

Roy attacked a clubgoer, a street sweeper, a guy waiting outside the Chapel Street Nike shop, another man outside Liquorland, and a man before Ms. Katsavos.

However, since other individuals had stepped in, Roy’s attacks on those four guys weren’t as severe.

She reportedly told the court that she had pardoned Roy for the assault, which had deprived her of her freedom and capacity to look after her spouse.

In a statement to the court, she said, “No punishment you are given will modify the life sentence you have given me.”

I’ll keep moving through this life with love and courage, I promise.

Due to her injuries, Ms. Katsavos needs a walking aid, and she has no other choice than to put her husband in a nursing facility since she is unable to care for him. She battles pain, grief, and loneliness every day.

He described Ms. Katsavos as an old lady doing selflessly for others while standing by herself at a church entrance.

“The incident began because you wanted to steal her trolley; after taking it, you dumped it, and following the attack, you left her on the sidewalk unconscious and defenseless.”

“Your offense is demonstrably severe,”

Roy has already completed 1.5 years of pretrial imprisonment. Before being eligible for release, he must serve three and a half years in jail.