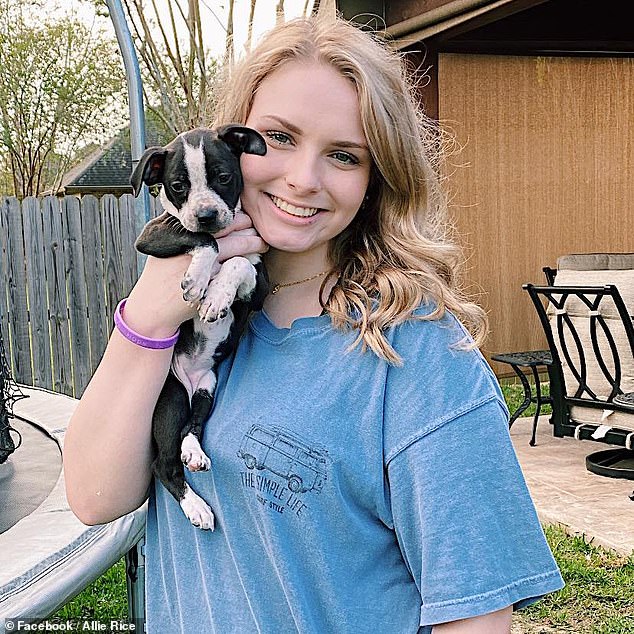 When a college girl in Louisiana who had been shot more than 10 times while waiting at a railroad crossing died, she was eating fries.

Allison Rice, 21, was fatally shot at approximately 2.30 a.m. on Friday along train tracks while returning home following a night out with friends.

Detectives are “at a loss” as to why the girl from Geismar, who acquaintances described as “bright and effervescent,” was brutally murdered.

The senior at Louisiana State University was assassinated less than five minutes after partying with pals at a club on Government Street when she was discovered shot to death in her vehicle in Baton Rouge.

She was shot many times through the windshield as she attempted to turn around at the railroad tracks, according to speculation.

On the street where she was shot, her friends and relatives have left flower tributes and some of her favourite foods. They have also erected a crucifix with her image on a telephone pole.

According to Unfiltered with Kiran, police have not yet named a suspect in the murder and have not determined the motive for the crime.

Rice received gunshot wounds to her arm and chest while she waited for a train to complete crossing the street.

Authorities found a number of shot shells beside her automobile in addition to fast food on her lap, but nothing had been stolen from it.

Officers are unsure of the reason for the death, therefore it doesn’t seem to be a case of mistaken identification.

“Our investigators are scouring the area,” a spokesperson said. Many of the investigations are being conducted in secret. very sad Really sad.

She is a lovely young lady. She had one more year to complete her degree at LSU and the rest of her life to look forward to.

When you hear the police officer remark, “She’s with the coroner now, she didn’t make it,” you know what he means. The most horrific words you will ever hear.

Her family is asking the police for clarification and is urging anybody with the knowledge to come forward.

‘Chief Paul has been working hard with putting the video surveillance systems up. We have that downtown, and we’re trying to push it and make it happen down to main corridors for Baton Rouge,’ said Sgt. L’Jean McKneely of the Baton Rouge Police. Government Street, Florida Street.

“My heart goes out to the family, loved ones, and classmates of Allison Rice, a young LSU student who had her whole life ahead of her,” EBR Mayor-President Sharon Weston Broome said.

The Baton Rouge Police Department is conducting a comprehensive investigation to apprehend the perpetrator of this heinous act.

“Our university community is a vital component of Baton Rouge’s social fabric. We must do all possible to provide a safe atmosphere as we welcome students from all across the state and the country.

Rice’s killing, which follows a wave of crimes against LSU students, is the 74th this year in the East Baton Rouge Parish.

A second student was wounded on August 19 during an attempted robbery, and two other abduction incidents occurred on campus only a few days later.

The FBI reports that Baton Rouge has one of Louisiana’s highest murder rates.