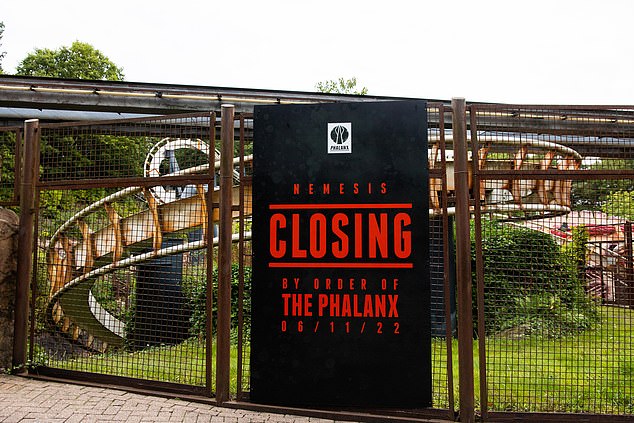 After learning that Alton Towers’ beloved Nemesis rollercoaster will be closing in November, fans of the attraction have claimed that “life will never be the same.”

This morning, the theme park said that its signature rollercoaster will shut on November 6 for “an exciting renovation before returning in 2024.”

It was announced on social media that Nemesis was shutting on the Phalanx’s orders. You may ride till November 6th.

“Please go to Alton Towers Resort in a timely manner.”

Meanwhile, banners that emerged all throughout the theme park informed guests of the preparations.

The Phalanx, a unique organisation “created to tame the alien Nemesis beast by putting the rollercoaster track over it back in 1994,” had ordered the closure, according to the posters.

Park authorities stated additional information would be made public closer to the time but that specifics of the change are being “kept under wraps.”

According to Stoke-on-Trent Live, a planning application was filed earlier this year to carry out “extensive repair work” on the ride.

A substantial portion of the track will be replaced as part of this, they said, in time for the attraction’s 30th birthday.

Nemesis is the first inverted rollercoaster in history to be built in Europe, and it has been thrilling thrill seekers since 1994, according to Kate McBirnie, director of product excellence at Alton Towers Resort.

We want to offer lovers of the ride the chance to experience Nemesis in its present condition before it shuts on November 6 since it is beloved by thrillseekers across the UK and beyond.

After receiving the news, loop-the-loop enthusiasts said that their day had been “ruined.”

One user posted on social media that Nemesis was shutting. Ruined Wednesday

Another person commented: “NEMESIS NO ONE TALK TO ME THIS IS THE WORST NEWS. ALTON TOWERS ARE CLOSING.”

A third wrote: “Nemesis is being shut down by Alton Towers. Never again will life be the same.

When the ride opened in 1994, it was dubbed the first inverted rollercoaster in Europe and cost £10 million to construct.

At speeds up to 50 mph, riders experience 3.5 G-force as they fly past the rivers and rocks of the theme park’s Forbidden Valley.

It transports dangling thrill-seekers through four inversions and numerous twists and turns.

According to Alton Towers, the ride has drawn visitors “from all over the world” to the Staffordshire theme park.

»“Life will never be the same” for Nemesis fans«