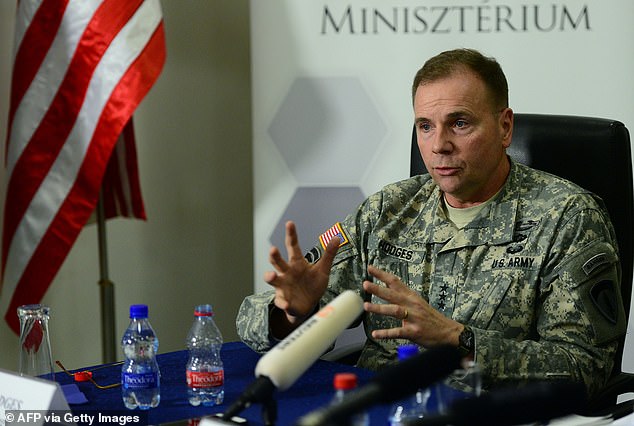 If Vladimir Putin deploys nuclear weapons in Ukraine, the United States would respond with “a catastrophic attack,” the former commander of the US Army in Europe has warned.

While warning that any American reaction “may not be nuclear,” retired lieutenant general Ben Hodges stated today that if Putin used nuclear weapons in Ukraine, the US may try to “destroy the Black Sea Fleet or attack Russian sites in Crimea.”

His remarks follow the Russian prime minister’s shocking announcement that his reserve armed troops will be “partial mobilised” in order to continue his homicidal invasion of Ukraine.

And desperate dictator Putin declared he would use “all measures” required to protect vast tracts of land captured or slated for annexation by Kremlin troops before threatening to deploy nuclear weapons in a terrifying warning directly addressed to Western and Nato leaders.

In his televised speech to the Russian people on Wednesday morning, he said, “If there is a danger to the territorial integrity of our nation, and in safeguarding our people, we will surely employ all means available to us – and I’m not kidding.”

Gen. Hodges, who led the US Army in Europe from 2014 to 2018, emphasised that it was “extremely improbable” that Putin would order a nuclear attack on Ukraine.

However, he said that American President Joe Biden will respond swiftly and harshly to any deployment of strategic weapons of mass devastation.

According to Gen. Hodges, “He [Putin] understands the US will have to retaliate if Russia uses a nuclear bomb.”

The US reaction may not include nuclear weapons, but it very well could involve a catastrophic attack that, for instance, might destroy the Black Sea Fleet or Russian sites in Crimea.

Therefore, I believe that President Putin and those around him will be hesitant to openly involve the US in the fight.

If Russia did launch a nuclear strike, the naval port of Sevastopol on Crimea’s western shore, which has been controlled by Kremlin troops since the peninsula was taken in 2014, might be one of the US’s potential targets.

According to British intelligence, Moscow has already relocated several of its Kilo-class attack submarines from the Crimean peninsula to southern Russia because of concern that they would be hit by long-range Ukrainian fire.

The UK Ministry of Defence said in a daily briefing on Tuesday that the submarines had ‘very likely’ been transferred from a naval facility at Sevastopol on the Crimean peninsula to Krasnodar Krai in mainland Russia.

The decision was made at a time when Putin must consider whether his purported “special military operation” would succeed in the wake of a spectacular Ukrainian counterattack last week that drove Russian soldiers in the northwest back over the Ukrainian border.

Putin stepped up his attack on Ukraine despite serious personnel and equipment shortages, declaring the ‘partial mobilisation’ of 300,000 military reservists – the first in Russia since the Second World War – and referendums in seized Ukrainian regions to become a part of Russia.

There will be elections in occupied Zaporizhzhia, Kherson, Donetsk, and Luhansk, which together make up the Donbas.

On Tuesday, the White House and Moscow both rejected the Kremlin’s intentions to stage referendums in several regions of Ukraine, referring to them as “shams with no validity.”

The national security advisor to President Joe Biden, Jake Sullivan, referred to the referendums as a violation of the concepts of sovereignty and territorial integrity.

In an effort to persuade friends to steadfastly support the Ukrainian resistance, Biden is prepared to declare before the UN General Assembly that the invasion is an insult to the core values of the organisation.

“He’ll provide a clear condemnation of Russia’s unlawful conflict in Ukraine and issue a call to the world to keep standing against the blatant aggression that we’ve witnessed these last few months,” Mr. Sullivan said.

At a time when a permanent member of the Security Council has attacked the fundamental foundation of the charter by contesting the concept of territorial integrity and sovereignty, he will emphasise the need of strengthening the United Nations and restate key principles of its charter.

Putin said that the West was attempting to “divide and destroy” Russia and issued a dire warning to those who were attempting to extort us with nuclear weapons: “The tables may turn on them.”

His action puts Putin at odds with Kyiv and its Western partners, who have already said that they would continue to launch strikes to free regions under Russian rule and that the outcomes of any “fake” referendums won’t be accepted.

The Russian president’s choice, however, also provides a clue as to the challenges his military has in deploying enough soldiers to the front lines.

The number of Russian fatalities cannot be verified. But this morning, the Ukrainian Defense Ministry said that more than 55,000 Russian soldiers had been “eliminated.”

The Institute for the Study of War estimated yesterday that up to 80,000 Russian soldiers may have been killed or injured.

According to Gen. Hodges, it was obvious that the invasion had a negative impact on Putin’s poorly-equipped force.

The former military leader said that Putin’s deployment of soldiers had no “significant influence” and that it was “too early to tell” what the Russian people would do in response.

He told MailOnline, “I don’t think that too many of them will be deceived by the logic of it, and I don’t expect that many would report as commanded.”

Before the Russian reserves could be “properly equipped” and sent to Ukraine, he claimed, “months” would pass.

He continued, “Without heavy artillery support, these new soldiers will be nothing more than cannon fodder this winter as Ukrainian forces press forward.”

Unfortunately for these soldiers, Ukrainian attacks on the logistical system that supplies ammunition to the guns have made Russian artillery less and less effective.

The Russian military forces now have a severe personnel shortage, he said, therefore there is very little excitement for any Russians willing to join this conflict.

I don’t anticipate any good times for the Russian military or the present Putin administration.

The situation for Russia’s forces is becoming worse as the conflict in Ukraine, which was only supposed to last a few days, is now over seven months old.

The Kremlin’s war machine instead concentrated its efforts on “liberating” the eastern Donbas area after being had to back from Kyiv in the early months of conflict as its progress stagnated.

Russia took control of the whole Luhansk area after months of gruelling fighting, but only around half of the adjacent Donetsk region, which together make up the Donbas.

As Russia’s advances slowed and ultimately halted, Ukraine launched an onslaught against the southern city of Kherson in retaliation.

Russia sent troops from other parts of the nation to assist in the city’s defence, at which time Ukraine began a second counterattack from Kharkiv, in the north, into the east.

The Kremlin’s commanders were entirely unprepared for that action, which set off a defeat that returned to Ukraine in a matter of days 3,000 square kilometres of terrain that Russia had spent months seizing.

Additionally, Kyiv has kept up the offensive, seizing control of the Luhansk area and posing a threat to advance farther throughout the province.

Putin had no choice but to start enlisting men since there weren’t enough soldiers to defend the land he had already taken.

Experts and analysts disagree, saying that it won’t significantly alter the course of the conflict in his favour.

To recruit, equip, train, and transport hundreds of thousands more soldiers to the front lines would take at least weeks, probably months; this is time that Russia does not have.

By the time reinforcements come, winter will have arrived, making combat operations much more difficult and complicating the extremely difficult situation the Russian military is presently in.

Additionally, recruiting additional troops would not address Russia’s persistent shortage of supplies and equipment within its ranks or resolve the logistical problems that have stymied its assaults.

Some compared it to the devastating Winter War the Soviet Union waged against Finland, which resulted in hundreds of thousands of Red Army soldiers dying or being injured compared to around 25,000 Finns.

Putin’s words at the UN last night were anticipated by Western leaders, who said they would not accept the outcomes of any “fake” referendums in Ukraine.

“The Russians are free to do as they choose.” As global leaders arrived for the United Nations General Assembly gathering on Tuesday, Ukraine’s Foreign Minister Dmytro Kuleba remarked, “It won’t alter anything.

Later, he emphasised the subject once again in a tweet that read: “Sham’referendums’ will not alter anything.” Any hybrid “mobilisation” won’t either.

“Russia has been and is still occupying Ukrainian territory unlawfully.” Whatever Russia says, Ukraine has every right to free its regions, and it will continue to do so.

According to French President Emmanuel Macron, the referendum idea “would be comical if it weren’t so awful.”

He warned that inactivity ran the danger of “tearing down the world order without which peace is not conceivable” and characterised Russia’s incursion as “a return to a new period of imperialism and colonies.”

It is not necessary to choose a side between the North or the South, or between East and West. According to him, it is a question of obligation to the UN Charter.