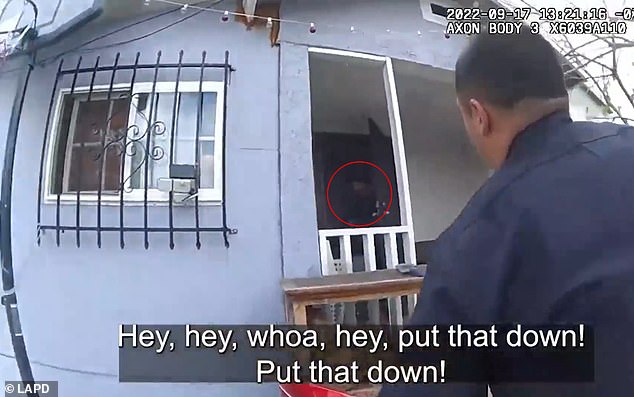 The LAPD has made the raw footage of the incident public. It shows the adolescent being shot and killed outside his house while brandishing a toy weapon as his mother begged the police not to harm her son.

Before 1:20 pm on September 17, when Luis Herrera, then 19, phoned 911 to report that his father had been mistreating him and his mother, police arrived at his south Los Angeles house. This call eventually turned out to be false.

The moment two uniformed cops approach the residence is captured on body cam video. Herrera comes with what looks to be a black gun in his hand before they reach the door.

The police officers flee to the side of the home and hide behind garbage cans. Put that down, put that down, and let go of that pistol, they can be heard shouting.

The cops repeatedly order Herrera to down what seems to be a weapon before they start shooting him. The teenager can be seen dropping the weapon to the ground in the footage. Although he looks to be disabled in the video, he is still moving.

The weapon in question was discovered to be an Airsoft gun, a BB-style toy that shoots plastic pellets, upon closer examination.

“My dad is drunk and he began pounding on my mom, and I attempted to get involved, and now he assaulted me,” Herrera says in the 911 call.

“My dad… I’m all bloodied because of him,” he said.

The LAPD has now published a new video that includes surveillance footage from Herrera’s property. His family’s response to the incident is shown on the film.

Captain Kelly Muniz, a spokesman for the LAPD, introduces the film. “He did not comply with police directions and shouldered the weapon and aimed straight towards the officers, culminating in an officer-involved shooting,” says Muniz in describing the circumstances.

The cop can also be seen handcuffing Herrera in the video as he approaches the wounded man.

When they flip him over, a handgun is discovered under his bloody corpse. According to investigators, it was also an Airsoft weapon.

It’s a toy, a lady can be heard screaming after the gunshot. What made them attack him? That’s my kid, the mother shouts repeatedly throughout the video.

Vicente Herrera, Herrera’s father, appears and informs the authorities that the firearm was a toy. He was instructed to return inside by the cops.

The day after his son passed away, Vincent told the Los Angeles Times that the altercation started when the teenager smacked a dog. The dog is like a tiny child, don’t strike it, I told him during our argument after he smacked my dog, his father said.

He continued, claiming that his kid was quiet and immature and that he liked to play video games. The shooting occurred two days before Herrera turned 20. Vicente said that his dispute with his son was unexpected.

I don’t know what went through his thoughts, he said.

Vicente claimed at the time that the responding officers had not ordered his son to put the gun down. He added that his son had received six gunshot wounds.

The officers kept yelling at him to put down the gun as he lay on the ground.

After being shot in the chest, Herrera passed away at the scene, according to paramedics with the Los Angeles Fire Department.

Police Officer II Luis Navarrete has been identified as the officer who fired the fatal shots. In the shooting, no officers suffered any injuries.

He has been put on administrative leave while the LAPD’s Force Investigation Division looks into the matter.

Until all the facts are known and the investigation is finished, we also do not draw any conclusions about whether the officers behaved in accordance with our policies and the law, Muniz says in the video.

Law enforcement officials have long been concerned about airsoft firearms because of their apparent authenticity. Major gun manufacturers like Glock and Barretta permit Airsoft adaptations of their designs.

Three Democratic senators wrote to the Consumer Product Safety Commission in 2019 to advocate the adoption of stronger regulations governing the selling of the toys.

According to the Trace, there are no federal rules or regulations governing the selling of the toys.

In 2018, Walmart stopped selling the toys, and Google has prohibited the promotion of Airsoft firearms on its platform since 2014.