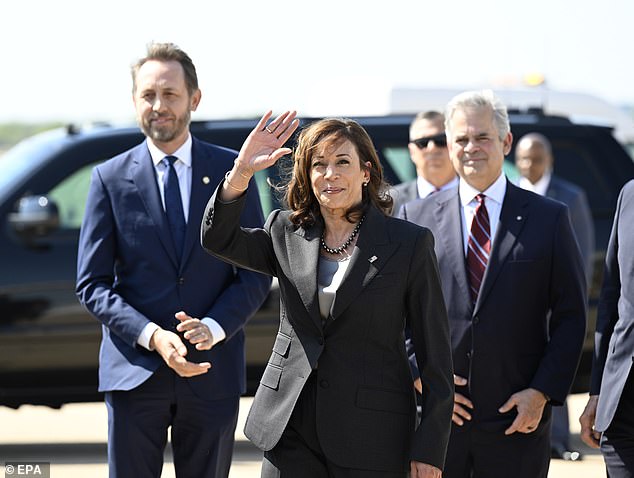 Further criticism has been leveled against Vice President Kamala Harris for failing to address the southern border problem while speaking at an event in Austin, Texas, but making time to label the state’s abortion laws “immoral.”

The concept that there would be a policy and an approach that would say to someone who has endured a terrible act of violence and violation, said Harris, 57, during a speech at the Lyndon B. Johnson Library.

It is unjust that you lack the autonomy and control over your body, which has just endured that act, to decide what should happen to it next, she said.

This choice shouldn’t be made for her by the government. Without a doubt, it is about freedom. It concerns liberty.

The southern border situation was not brought up once throughout the course of the whole 40-minute session.

The conversation will focus on “the Biden-Harris Administration’s commitment to defending reproductive rights,” according to the event’s announcement.

This week, President Joe Biden criticized states that have restricted access to abortion services and announced $6 million in financing for healthcare services to commemorate 100 days after the Supreme Court overruled Roe v. Wade.

At a White House meeting of the reproductive rights task team, which Vice President Harris also attended, he unveiled the new rules and the government money.

He discussed in his speech how since the Supreme Court decision, abortion rights have been restricted.

Harris went to a Texas Democratic Party event where she provided the keynote speech after leaving the presidential library.

According to a news release, the event intends to generate money for causes including “help with voting by mail, voter protection initiatives, community organizing, direct voter contact, and more.”

Harris has visited Texas twice in the last 30 days. The vice president spoke in Houston, Texas, in September at NASA and the National Baptist Convention.

Gov. Greg Abbott, a Republican, criticized Harris at the time for skipping a border visit.

‘Our proclaimed Border Czar, Vice President Kamala Harris, has yet to even visit the border to examine first-hand the consequences of the open border policies she helped promote, even going so far as to declare the border is’secure,” he stated.

Till President Biden and Border Czar Harris take action and perform their responsibilities to control the border, Texas will keep sending migrants to sanctuary towns like Washington, D.C.

This week, Harris’ home at the Naval Observatory in Washington, D.C., received a busload of migrants.

On Thursday at the crack of dawn, a bus stopped close to Harris’ house where more than two dozen refugees got off and were welcomed by volunteer and assistance organizations.

The refugees were then loaded into smaller buses and sent to lodgings nearby.

Leading conservatives in Texas pushed Harris to visit the border before she even arrived in the Lone Star state.

Republican Congressman Tony Gonzalez shared a picture on Twitter the day before her arrival in Austin with the caption: “Here at the border.” Kamala where are you?

Sen. John Cornyn released Harris’ itinerary for her trip to Texas, saying it left “no time for the border.”

The vice president should rethink her travel plans and visit the southern border that she has so carelessly disregarded, according to Macarena Martinez, a spokesman for the Republican National Committee, regarding Harris’ trip on Thursday.

Soon after assuming office, Harris was given the responsibility of tackling the migration problem, a duty that her administration quickly rebranded as one that sought to identify the underlying reasons why individuals migrate from their home countries to the US in search of refuge.

Republicans have slammed Harris for doing little to stop migration at the southern border and have attacked Alejandro Mayorkas, the secretary of the Department of Homeland Security.

A staggering record high of over 2.1 million interactions were reported in Fiscal Year 2022, according to CBP figures published last month, and there is still one reporting month remaining in the year.

Comparing this to the same time in Fiscal Year 2020, there has been a rise of 437 percent.

Additionally, there was a 279 percent rise in interactions between Fiscal Years 2020 and 2021, which corresponded to President Donald Trump’s last year in office and Vice President Joe Biden’s first year in office.