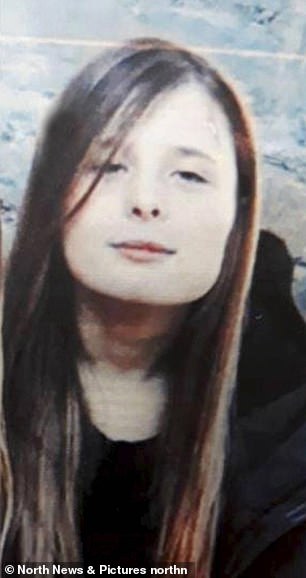 The death of a 15-year-old girl with ADHD was discovered near abandoned structures after she ran away from drinking companions, according to an inquiry.

Friends discovered the body of Seesha Dack in North Shields, Newcastle, on 1 September 2020, two days after she went missing from the Fish Quay.

The Newcastle Coroner’s Court heard that police had conducted searches in the same area but were unable to locate the teen.

Ms. Dack, from North Shields, did not have a history of self-harm, but she was reportedly intoxicated that night.

Sunday, August 30, 2020, Seesha Dack was last seen at the Fish Quay in North Shields, North Tyneside. Two days later, it was reported that a body had been discovered in North Shields near Tanners Bank.

She was involved with child and adolescent mental health services for an extended period of time. There is no recent history of self-harm threats or attempts.’

Wednesday’s inquest in Newcastle heard that a missing person investigation was initiated by police when Seesha vanished on August 30, 2020.

Coroner: “On August 30, 2020, in the Fish Quay neighborhood of North Tyneside, she ran away from her pals while under the influence of alcohol.”

Police searched for Seesha Dack for two days after she went missing. The 15-year-old had no history of self-injury, but was reported to be intoxicated that night.

She died owing to her own acts while suffering from ADHD and under the influence of alcohol, according to Coroner Dilks.

Northumbria Police stated that the size of the region to be searched presented “challenges,” and their specialized squad had not yet reached the location where Seesha was discovered.

A Northumbria Police spokesperson stated, “First and foremost, our thoughts remain to be with Seesha Dack’s family and friends following her untimely demise.

‘Over the course of two days, substantial efforts were made to locate Seesha, including initial searches in the area where she was eventually discovered.

As part of the search, a police helicopter circled Seesha’s last known location.

‘However, due to the recognized difficulties posed by the extent of the region to be searched and the rough terrain, it was determined that a specialized team would conduct additional extensive searches.

These searches had been ongoing all day, but had not yet reached the location where Seesha was discovered by her companions.

At the time, flowers were placed in her honor and hundreds of people gathered at Fish Quay Sand for an emotional balloon release, while an internet fundraising page was established to assist her family.

Together with police, a North Tyneside Police search squad combed the North Shields region in search of Seesha.

In addition, a police boat was spotted on the river in the region as part of the search for the missing 15-year-old.

The loss of our daughter and sister Seesha has left us beyond saddened. Seesha was a lovely, humorous, effervescent, and modest young lady whose smile could light up any room.

Her personality was priceless and irreplaceable. She went out of her way to help others, even bringing food from home to give to a homeless guy she frequently encountered.

Even though it was not the news we had hoped for, we would like to thank everyone in the community and beyond for their assistance in our search for her.