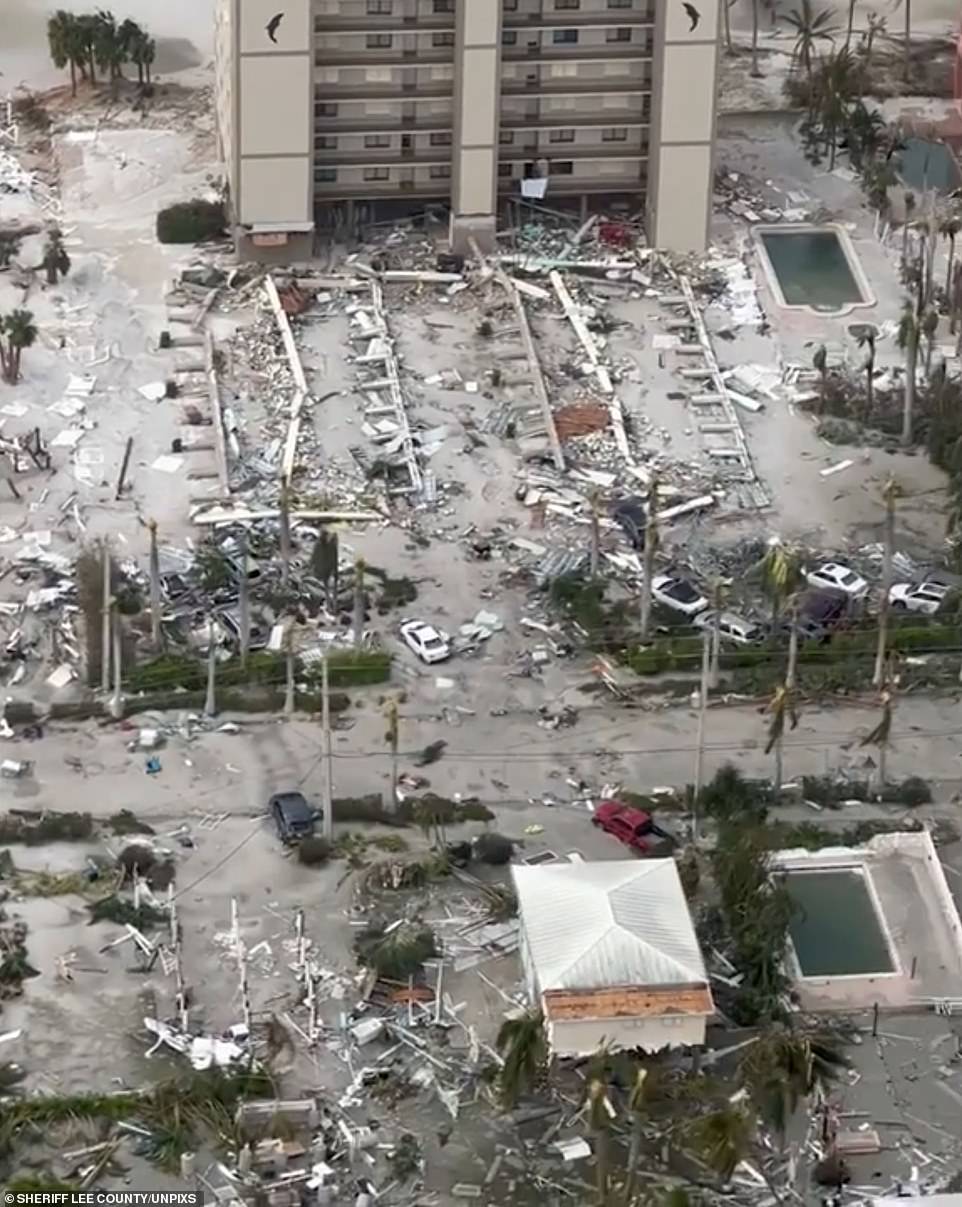 The number of hurricane Ian deaths that have been officially verified has increased to 77, with the bulk occurring in a Florida county that has come under fire for delaying its evacuation warning.

There were 35 fatalities in Lee County, which is home to Fort Myers and the hurricane’s destruction core on Florida’s Gulf Coast, as a result of county authorities delaying issuing evacuation orders for a day longer than other adjacent communities.

According to NBC News, Florida has been the site of all 77 of the fatalities that have been officially documented.

Lee County authorities told the New York Times that they delayed issuing the order because previous projections indicated the hurricane would move farther north. The order was finally issued on Tuesday morning, just over 24 hours before the storm made ashore.

Following Ian’s destruction, search and rescue efforts are still being conducted across the county and the rest of the Sunshine State, according to Lee County Sheriff Carmine Marceno, who also verified the most recent fatality report on Saturday.

Over 600 to 700 persons in need have been rescued today, according to Marceno. “Unfortunately, we’ve had roughly 35 fatalities during this trying period. That number is something I utter with much sadness.

‘Last night I just sat there by myself thinking about the destruction, going through images, and I’ll tell you it brought tears to my eyes,’ the sheriff said. We’re going to put in more effort and become more powerful than before.

Additional fatalities were recorded in the counties of Charlotte, Volusia, Sarasota, Lake, Collier, and Manatee.

Most of the deaths recorded in Florida were drowning-related, although some people tragically perished as a result of the storm’s aftermath.

Authorities said that an elderly couple died when their oxygen devices went off when they lost electricity.

A 68-year-old lady who was carried off by a wave into the ocean and a 67-year-old man who slipped into rising water inside his house while waiting for help were also among the deceased.

Authorities said that a 71-year-old man died after falling to his death from a rooftop while installing rain shutters, and a 22-year-old woman died when an ATV rolled over from a road washout. Earlier in the week, three more persons passed away in Cuba.

Despite the destruction in Florida, there were images of optimism as more than a thousand individuals participated in search and rescue efforts there. A guy was seen in video from Fort Myers Beach being extricated alive from the broken pieces of a wrecked house.

Rescuers kept looking for survivors early on Saturday while assessing the damage caused by the hurricane’s second impact in South Carolina and Florida’s destroyed and submerged houses.

While moving north into Virginia, the remains of one of the most powerful and expensive storms to ever strike the US brought torrential rains and left thousands of people without power in the Carolinas.

The hurricane, which made landfall on Florida’s Gulf Coast on Wednesday as a monstrous Category 4, devastated coastal communities.

In South Carolina’s historic city of Charleston, it battered seaside Georgetown on Friday with winds of up to 85 mph.

Millions of people were terrorized by the powerful storm for the majority of the week as it tore through Florida from the warm waters of the Gulf of Mexico to the Atlantic Ocean, where it gathered enough strength for its final assault on South Carolina. The storm first tore through western Cuba before raking across Florida.

Ian, a post-tropical storm that has now weakened, was forecast to pass over central North Carolina on Saturday morning and make landfall in south-central Virginia by the afternoon.

The National Weather Service issued a flash advisory stating that “Widespread showers and some thunderstorms are anticipated to persist over the weekend from the middle Appalachians through the Mid-Atlantic and southern New England.”

Although there was a chance of flash flooding in certain areas of West Virginia and along the Mid-Atlantic coast, rainfall totals were expected to be in the one to two inch range.

The National Hurricane Center issued a warning that the storm’s impacts might last for days.

Through the next week, central Florida will continue to see major to record river flooding. This weekend, there is a chance for moderate river flooding across the coastal Carolinas, as well as localized flash, urban, and small stream flooding in the central Appalachians and the southern Mid-Atlantic, according to the report.

Distressed Florida homeowners, meanwhile, swam through knee-deep water on Friday to transfer whatever items they could from their flooded houses into rafts and canoes.

“I want to weep in the corner.” Stevie Scuderi shuffled around her partly wrecked Fort Myers condo, the muck in her kitchen sticking to her purple shoes, and muttered, “I don’t know what else to do.

Ian’s center landed in South Carolina close to Georgetown, a little town on the Winyah Bay that is located around 60 miles north of the famous Charleston.

Four piers along the coast were partially destroyed by the hurricane, including two that were linked to the well-known tourist destination of Myrtle Beach.

On Friday, the storm’s winds were far less than they had been earlier in the week when Ian made landfall on Florida’s Gulf Coast. Residents there were in disbelief as they attempted to make sense of what they had just experienced, while authorities and volunteers were still evaluating the damage.

In order to transfer his grandmother and girlfriend to the second story during the storm, Anthony Rivera, 25, said he had to crawl through the window of his first-floor flat. The storm surge had pushed a boat up right next to his flat as they scurried to get out from the rising water.

Because I can’t stop any boats, he said, “That is the scariest thing in the world.” I’m not Superman, I say.

Ian had long since left Florida, yet troubles kept cropping up. Due to the enormous amount of water over the Myakka River, a 14-mile section of Interstate 75 in the Port Charlotte region was shut down late Friday in both directions.

A meteorologist at the National Weather Service in Tampa named Ross Giarratana reported that the Myakka was cresting on Saturday morning at a record 12.73 feet.

In Polk, Hardee, and DeSoto counties in the southeast, the Peace River was also at a significant flood level early on Saturday. According to Giarratana, the bulk of those locations have not yet crested.

He said, “It was incredible to see exactly how rapidly the rivers were rising.” “We knew we were in for some record stuff,” said the group.

Authorities warned that the death toll would probably increase significantly after teams conducted a more thorough assessment of the damage as the official death toll increased throughout the day on Friday.

According to Florida Division of Emergency Management Director Kevin Guthrie, searches were focused on emergency rescues and preliminary evaluations. He gave the example of a house that was submerged.

Although the water was above the rooftop, a Coast Guard rescue swimmer was able to swim down into it and determine that it seemed to be human remains. We are unsure of the precise number,’ Guthrie added.

He estimated that 10,000 individuals were missing, although many of them were probably in shelters or without electricity.

Governor Ron DeSantis remarked, “Those older houses that are simply not as solidly constructed, they were swept into the sea.”

It would be quite challenging to survive if you were to bunker down like there, in my opinion.

According to the disaster modeling company Karen Clark & Co., which routinely publishes flash catastrophe estimates, Hurricane Ian is expected to have caused “far over $100 billion” in damages, including $63 billion in losses from privately insurance policies.

If those figures are accurate, Ian would rank as at least the fourth most expensive storm in American history.

Residents of the Country Club Ridge neighborhood in North Point, Florida, waded through flooded streets on Friday. North Point is a Sarasota suburb. Through the ankle-deep water, John Chihil gravely dragged a canoe and another small boat.

There isn’t much to feel, actually. You realize it’s a work of God, he said? All you can do, really, is hope and pray for a better day the next day.

»Hurricane Ian kills 77, including an elderly couple without oxygen«