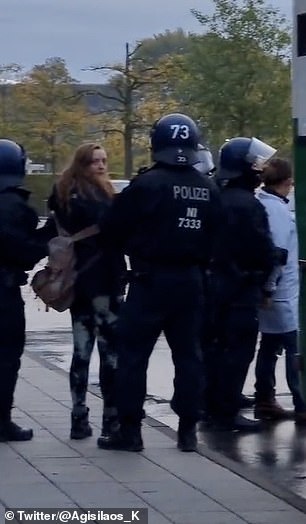 Eco-protesters who attached themselves to the Volkswagen manufacturing floor and then complained that their hands hurt and they couldn’t use the restroom have been detained.

Late on Wednesday, nine members of the group “scientific revolt” stormed the Porsche pavilion at Wolfsburg’s Autostadt, a museum and auto showroom across the street from Volkswagen’s main plant.

They swore to continue their protest until Volkswagen agreed to press the minister to decarbonize the transportation sector, but after just a few hours, they started grumbling that they had no food and that employees had declined to provide them a bowl to urinate in.

After announcing his hunger strike, Gianluca Grimalda started to complain that his hand, which he had superglued to the floor, was bloated and that doctors had told him he was at danger of blood clots.

After just one day of protesting, he consented to go for medical attention and was then detained before riot police arrived to remove the remaining protesters.

Another protester, Agisilaos Koulouris, tweeted a picture of the Autostadt filled with riot police with the phrase, “They are arresting everyone.”

Members of the “Scientist Rebel” organization, which describes itself as a group of scientists “ready to expose the truth about the climate problem, and act on it,” are the activists.

They are pressing Volkswagen, one of the biggest automakers in the country, to do more to combat pollution.

Online images of the protest showed six of the demonstrators pinned to the ground in front of three Porsches.

Additionally, they had attached fake newspaper front pages on global warming to the cars inside the dealership.

‘Together with 15 other members of Scientist Rebellion, I have invaded the Porsche pavilion at Autostadt,’ Mr. Grimalda tweeted as the demonstration got started.

Until our demands to decarbonize the German transportation industry are realized, there are nine of us stuck to the floor and some of us on hunger strike.

Two hours later, though, he had already started to gripe about how they had “refused our request to give us with a bowl to pee and defecate in a dignified way while we are bonded, and have turned off the heater.”

People in support may exit the building, but they are unable to enter in again, he said. We are compelled to utilize the Volkswagen-provided menu, which we cannot order.

Mr. Grimalda tweeted a picture of his swollen hand and said that a doctor had been sent in to check him after spent the night sleeping on the floor.

Doctors determined that he could have life-threatening blood clots in his hand and advised transferring him to the hospital right away.

My health is obviously very important. I agreed to leave this amazing company and was then transported to the hospital.

As a result, Mr. Grimalda was escorted out of the pavilion where activists claim he was detained less than a day into the protest and without having had any of his requests addressed.

The next tweet from Mr. Koulouris read: “Now, only a few minutes later, they’re threatening us that we need to leave quickly or else we’ll be arrested.”

Numerous riot police were seen inside the pavilion in images, and subsequent footage showed several being detained outside.

As they demand that governments take action to address climate change, climate protestors have caused chaos across Europe.

After spray-painting the renowned Harrods store in Knightsbridge, central London, with orange paint today, Just Stop Oil protestors fastened themselves to a road outside the store.

Just Stop Oil protestors attempted to block another route earlier this month and doused an Aston Martin shop with paint.

A day after dumping tomato soup over a van Gogh artwork at London’s National Gallery, two protestors showed up in court on Saturday.

According to the gallery at Trafalgar Square, the picture was shielded by a screen, but the frame sustained damage.

A group of eco-protesters who caused a commotion by stopping traffic on a major road in Rome have been dragged away by enraged drivers in Rome.

In order to oppose fossil fuels, Last Generation activists hoisted huge banners on the Grande Raccordo ringroad outside of the Italian city on Monday during rush hour.

Drivers were irate as a result of the obstruction and stepped out of their cars to argue with the eco-fanatics and beg them to move aside.

Some others intervened directly by yanking demonstrators out of the road.

One guy on a motorcycle said angrily, “I have to leave, I’m a doctor,” pleading for passage.

However, a female activist requested that he give over his medical identity after refusing to let him through without viewing it.

When he ultimately waved his ID card in front of the protester, they parted ways.