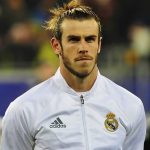 Real Madrid’s Welsh midfielder is Gareth Bale. He is renowned for his ability to curve free kicks, hit long balls, and speedily evade opponents. On the pitch, he has “tremendous speed, superb crossing ability, a great left foot, and exceptional physical traits,” which have earned him praise. In 1999, his career began in Southampton. Since then, he has been progressing and building a name for himself in the football world. His other sides include Tottenham Hotspur, the national teams of Wales at the U17, U19, and U21 levels, and Wales.

Gareth Frank Bale was born in Cardiff, Wales, on July 16, 1989. His parents are a school custodian and an operations manager. His father is named Frank Bale and his mother is Debbie Bale. Chris Pike, his uncle, also plays football for Cardiff City. He has a sister named Vicky who is younger than him.

He attended Whitchurch Senior High School. In addition to his football involvement, he participated in rugby and hockey at school. The 100-meter sprint record he set was 11.40 seconds. This limited his use of his left foot and his ability to play one-touch football. Southampton has recognized his abilities and enrolled him in the Bath satellite academy.

When he began training for Southampton, he was just 14 years old. By the time he reached 16, he had already helped his under-18 squad win the Cardiff & Vale Senior Cup. In the summer of 2005, he graduated from high school with an A in physical education and the department’s award for service to sport. He formally joined Southampton and became the second youngest member in its history.

Gareth is in a relationship with Emma Rhys-Jones, his high school sweetheart. They reside with their children in Madrid. Their first child was delivered at University Hospital of Wales on October 21, 2012. Her given name was Alba Violet Bale. The birth of their younger child was on March 22, 2016. Three months after the birth of their daughter on July 17, 2016, and a day before his 27th birthday, Gareth and Emma have announced their engagement.

He has supported various products and appeared in EA Sports’ FIFA game series, notably the British, Irish, and Middle Eastern versions of FIFA 14. His list of supported brands includes BT Sport, Adidas, Lucozade, and EA Sports. In March 2014, he is the first player to wear the Adidas F50 crazylight football footwear. In addition to his $19 million annual pay with Real Madrid, he earns an estimated $12 million each year through endorsements and other opportunities.