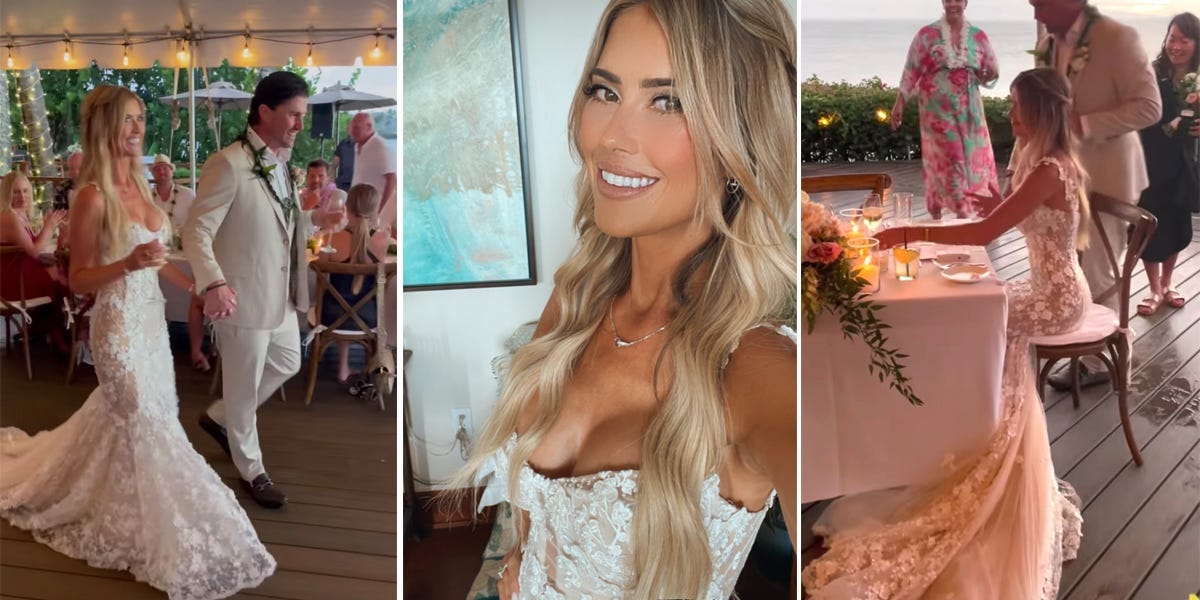 At her second marriage to Josh Hall, Christina Hall looked stunning in a beautiful and provocative wedding gown.

The “Flip or Flop” celebrity, 39, and Josh, 41, celebrated their marriage over the weekend in Maui after being legally wed in April, the pair said in an Instagram post.

According to the picture shot by Anna Kim, Christina’s dress for the destination wedding was nearly entirely covered with appliqué flowers. Josh sported a beige suit.

The romantic-looking, form-fitting gown flowed into a tulle skirt with a train.

The transparent side panels of the dress, which exposed Christina’s flesh from the bodice to her thighs, were perhaps its most striking element.

In pictures Christina posted on her Instagram story, the bodice of the dress also included see-through embellishments.

The dress was finished with a sweetheart neckline and spaghetti straps adorned with flowers.

Nikki Aguilar, who also did Christina’s hair, gave her a half-back braided hairdo and natural makeup.

According to People, just 40 guests, including the three children she has with Tarek El Moussa—Taylor, 11, Brayden, 6, and Hudson, 2—attended the Halls’ wedding. Anstead and Christina are now engaged in a contentious custody dispute.

Christina and Josh have been dating since March 2021, after her split from Anstead in September 2020. In May, they settled into their $12 million house in Newport Beach, California.

On the upcoming HGTV series “Christina In The Country,” which will highlight the couple’s lives in Tennessee, fans may learn more about the couple’s relationship.