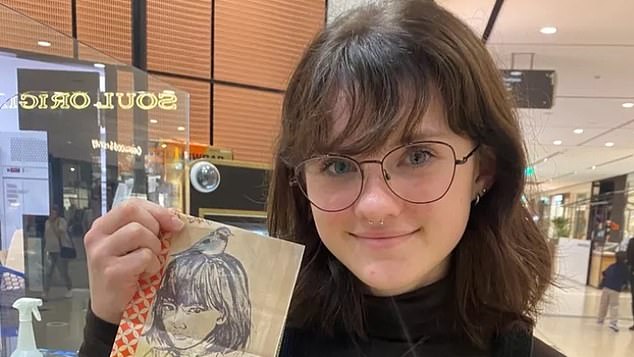 Emily Nicole Thompson, 18, was allegedly murdered by her ex-boyfriend Aaron Mitchelson Huckel, 19, hours after police said the pair met in a carpark in Strathpine, a northern suburb of Brisbane, on Saturday.

Following a distressing phone call from Ms. Thompson’s parents, police located Mr. Huckel at a fuel station 80 kilometers away in Nambour, on the Sunshine Coast, before discovering her death in nearby wilderness on Sunday.

Emily Nicole Thompson, an 18-year-old teenager who was discovered dead in a bush, has been eulogized by her bereaved family, friends, and educators.

A GoFundMe was established to assist the family, and more than $30,000 has already been raised.

Emily, not “a 18-year-old woman,” is her name. A daughter, sister, granddaughter, cousin, niece, and friend who is dearly loved. According to the GoFundMe, Emily was abducted from her family under the worst of conditions.

Emily was a high school senior set to take her final exams and had her entire life ahead of her. She had purchased a lovely gown in preparation for her prom, which she would attend in a classic automobile driven by her adoring grandfather. Her group of friends planned to celebrate the end of school and the beginning of their adult lives.

Emily was an intelligent, compassionate, and loving girl. It was never about Emily but rather her family and friends. Her family is heartbroken and in disbelief as they attempt to fathom life without Emily.

Emily, not “a 18-year-old woman,” is her name. A daughter, sister, granddaughter, cousin, niece, and friend who is dearly loved. Emily was taken from her family under the most tragic of circumstances,’ claimed the GoFundMe page.

One of her former instructors offered a particularly poignant tribute.

“I am astounded that Em’s promising future has been stolen. Em was my student for two years. She was a remarkable student who was also a credit to her family. I am deeply sorry for your loss. Deborah Buick, a teacher, expressed her heartfelt sympathies to everyone of her loved ones in a letter she penned after learning of her death.

Other contributors also offered countless heartfelt comments to the ‘thoughtful and compassionate’ teen.

“During elementary school, my daughter Lily’s best friend was the lovely Emily. Although they attended separate high schools, they maintained regular contact,’ wrote one donor.

“Lily’s heart is broken… Emily was a bright and adorable young girl who was maturing into a remarkable young lady. This is a Tragic Event!! Fly high, angel – you will always be in our hearts!!!

A GoFundMe page established to assist the family financially has received $30,000 in contributions, with many people offering heartfelt recollections of Emily.

Someone another stated, “Em was one of the kindest people I have ever had the pleasure of meeting.” Although she was in the grade above me in elementary and secondary school, Em always made me feel valued and offered guidance. All of you are in my thoughts.

A third stated, “Em has always been such a remarkable person in people’s lives; she brought joy wherever she went and will live on forever in the hearts of those who had the privilege of knowing her.” Missing you terribly.’

The Queensland Police say that Ms. Thompson and Mr. Huckel met at approximately 4.30 p.m. on Bells Pocket Road in Strathpine.

Saturday evening at 8.30 p.m., police discovered Huckel alone at a service station in Nambour, around 80 kilometers from where the pair had met that afternoon.

After the adolescent failed to return home by 7 p.m., her distraught family called the police.

Mr. Huckel was apprehended around 8:20 p.m. at a gas station on Currie St. in Nambour, approximately 80 kilometers from where he allegedly met Ms. Thompson.

The body of Ms. Thompson was discovered about 3 a.m. on Sunday, approximately 1 kilometer from the service station.

Mr. Huckel was charged with murder and mistreatment of a corpse for allegedly relocating the body of his ex-girlfriend.

He was denied bail and due to appear in Maroochydore Magistrates Court on Monday, but he did not show up.

He was remanded in custody, with a hearing planned for October 31 before the Pine River Magistrates Court.

Anyone who noticed a white 2016 Ford Mustang or a blue 2012 Mazda 3 near the Rob Ackers Sports Reserve (above) is urged to contact the police.

Ms. Thompson’s vehicle was discovered in the Strathpine parking lot where she first met her ex-partner.

Anyone who observed a white 2016 Ford Mustang or a blue 2012 Mazda 3 near the Rob Ackers Sports Reserve in Strathpine between 4 p.m. and 6 p.m. is asked to call the police.

Additionally, police are seeking witnesses who spotted a white 2016 Ford Mustang on Park Road, Nambour, between 6 p.m. and 8.30 p.m.