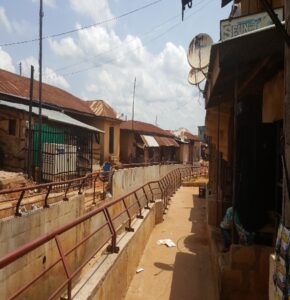 By Nekpen Maureen Nwine
Flooding and gully erosion often result in destruction of property and sometimes human casualties, especially during the wet season.

Flooding being a natural occurrence, sometimes defies scientific solutions. The problem of flooding is not peculiar to Edo State alone. In 2007, flooding affected about 1.5million people across several countries in Africa.
March 2012 recorded the worst flooding in recent memory which affected at least 32 out of the total 36 States in Nigeria.

Urbanization and industrialization, which are originally proof of development in any nation, increase the number of roads and buildings, which in turn, increase the proportion of surface area where water cannot be absorbed into the ground, leading to rapid runoff.

This causes easy flooding during rainfalls. Flooding may also be caused by irresponsible and careless activities by humans, like the erection of structures and disposal of refuse on waterways and drainage channels.

In combating this menace in Edo State, the Governor Godwin Obaseki-led Government through the Nigeria Erosion and Watershed Management Project (NEWMAP) intervened in fifteen sites across the three senatorial districts of the State, in areas that were once ravaged by flood and gully erosion, and areas that were only flood-prone which include; Ambrose Alli University (AAU), Edo College, Fugar-Agenebode Road, Gapiona, Emu, Ewu, Urora, Queen Ede, Ekenhuan, Ibore, Igbei-Auchi, Iguosa, Ogiso, Oshiobugie, and Ugboha.’

This is in addition to the over 40kms of secondary drains, excluding the over 400kms constructed by other ministries and agencies, over 14kms of primary stormwater culvert drains, and 4kms of earth storm water channels. This is more than what has been done by any other government in the history of the State.

These intervention sites in the various communities in Edo State have continued to positively impact on citizens, opening up communities and improving the livelihoods of people in the State.

According to the State Coordinator, NEWMAP, Dr. Tom Obaseki, “several flood-ravaged communities have been impacted. Routes to farmlands that were once devastated by erosion have been restored, making Agriculture viable again. Commercial activities in communities such as Oshiobugie in Auchi, Queen Ede, among others, have been rekindled.”

Taking into cognizance the State Government’s efforts thus far, there is a need for all stakeholders to collaborate with Government, take ownership of flood control and change their attitude towards the environment for its protection.
Proper desilting of drainages coupled with the right mindset are basic steps towards protecting our environment.