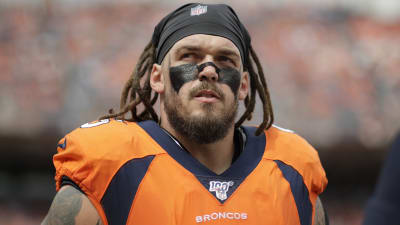 “After 10 seasons in the NFL, I’ve decided it’s time to step away from the game. Time for a new beginning.” Derek Wolfe announces on Twitter.

Wolfe joined the NFL as the Broncos’ 36th overall pick in the 2012 NFL Draft, and he quickly established why he was selected in the second round, compiling 40 tackles (nine for loss) and six sacks in just one season. It began Wolfe’s eight-year tenure with the Broncos, during which time he was an integral part of the defensive front for Denver as they competed for the Super Bowl.

“In my opinion, that Super Bowl was the easiest game that we played all year,” Wolfe said in his retirement video. “All season. Easiest game, because we knew that there was nothing, there was no denying that victory for us. We weren’t going to be beat. We just knew it.”

Wolfe never played in fewer than 11 games in a season, but in his later Broncos years, he also struggled through his fair share of injuries, twice ending up on injured reserve between 2017 and 2019 due to a neck issue and an elbow dislocation.

When the Denver Broncos acquired five-time Pro Bowler Jurrell Casey from the Tennessee Titans in exchange for a seventh-round pick, Wolfe’s career in Denver came to an end after the 2019 campaign. Wolfe signed with the Baltimore Ravens just two weeks later, and played there for one season before suffering a hip injury that prevented him from taking part in a regular-season game in 2021.

Despite his departure near the end of his career, Wolfe found where he belongs when Denver chose the University of Cincinnati product in 2012.

“I’ve made Denver my home,” Wolfe said. “It feels like I’m from here now. I’ve lived here for a decade. I love it here.”