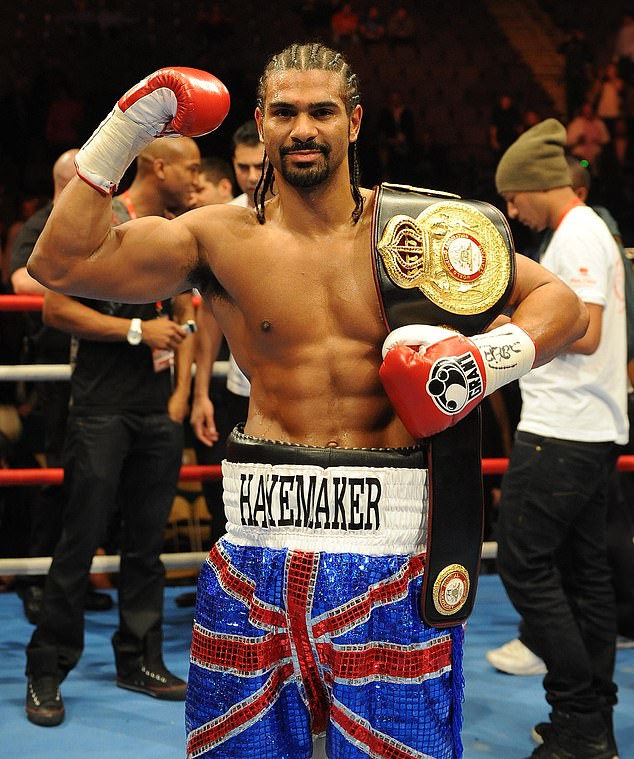 Today, a court heard that former world champion boxer David Haye seized an audience member by the throat during a comedy event and said, “Say one more word and I’ll kill you.”

Nickesh Jhala, who attended Paul Chowdhry’s concert at the Hammersmith Apollo with his girlfriend, was left ‘terrified and traumatized,’ according to court testimony.

Mr. Jhala’s cousin was rejected by the boxer when he approached him for a talk during the intermission.

Haye, age 41, however, climbed over chairs to reach Mr. Jhala, who was seated behind him.

According to prosecutor Jonathan Bryan, Haye was approached by a number of individuals who desired to speak with him.

Haye returned to his seat after declining to converse with Mr. Jhala’s former boxer relative.

David Haye fought Audley Harrison at the peak of his career at the Best of Enemies event at the MEN Arena.

He pleaded not guilty to assault at the Hammersmith Apollo in west London on October 30.

Mr. Bryan stated, “The cause is unclear, but shortly thereafter David Haye stood up and ascended or stepped over the back of his seat.”

He says the individuals behind him were making disparaging remarks about him and his girlfriend.

David Haye placed his hands on the victim’s neck and threatened to kill him, stating, “If you say anything else, I will kill you.”

“David Haye rejects these accounts of events; the victim escaped unharmed but was traumatized by what transpired.”

The incident lasted only a few seconds.

A few days later, Mr. Jhala reported the event, but Haye was out of the country.

Chris Robshaw and David Haye will celebrate the launch of Sir Elton John’s autobiography “Me” in conversation with David Walliams on November 19, 2019 at the Eventim Apollo in Hammersmith.

On June 3, he was arrested at Heathrow Airport and charged with assault by beating the following day.

James Scobie, KC, for Haye stated, “We rely heavily on the CCTV to establish our unambiguous case, which is that David Haye placed his hand on Mr. Jhala’s shoulder at most, and there were never any threats to kill.”

Mr. Jhala stated in court, ‘I was there with my partner and relative to see the comedian Paul Chowdhry.

The Apollo Theatre employees contacted us during intermission and asked if we wanted to go forward and be closer to the stage, to which we responded affirmatively.

My relative recognized David Haye before returning to his seat and approaching him.

There we were seated David Haye rose from his seat and began approaching towards us, after which he walked towards me.

“Did you know why you were approached?” asked Mr. Bryan.

Mr. Jhala stated, “He approaches me, leans into my ear, and places his hand around my throat.”

Mr. Bryan asked, “Could you provide a demonstration?”

Mr. Jhala then wrapped his fingers around the back of his neck and placed his hand around his neck.

“While he was doing that, he threatened, ‘Say one more word and I’ll murder you,'” Mr. Jhala explained.

“How tight was the grip?” Mr. Bryan inquired.

Mr. Jhala said, “Tight, I felt intimidated and was shaking.”

Mr. Jhala stated, “We quickly left the show and went for a drink since I didn’t want my cousin and partner to ruin the evening.”

“Initially, I did nothing, but as I went to sleep, it was on my mind. I reported it after a few days.

I thought it wouldn’t effect me; I thought I’d just ignore it, but then I realized that this shouldn’t have occurred.

Mr. Bryan reviewed the CCTV footage of the moment when David Haye approached him and said, “How are you feeling at this time of the evening?”

Haye, who appeared in court today wearing a black blazer, white shirt, and blue pants, was one of Britain’s most successful boxers, having retired from the sport in 2018 with a record of 28 wins and four losses.

In 2008, he became the undisputed cruiserweight world champion, then in 2009, after stepping up to heavyweight, he won the WBA championship. In 2012, Haye placed third in the 12th season of ITV’s I’m a Celebrity…

Haye, of Albert Embankment in central London, denies committing an assault by beating on October 30, 2017.