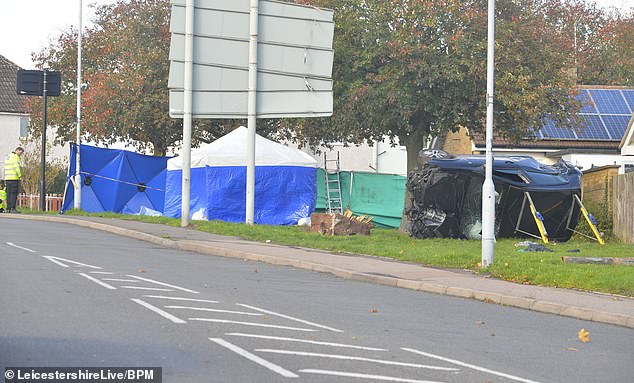 A 14-year-old female was killed and her friend was injured after they were struck by a car that had gone off the road; police are currently arresting a man for drunk driving.

The horrifying images depict a Vauxhall Astra on its side after mounting a grass verge at the intersection of Braunstone Lane and Mortimer Way in Leicester at 11 a.m. on Wednesday.

Since then, a 37-year-old male has been held on suspicion of causing death by reckless driving and driving with a blood alcohol concentration that exceeded the legal limit.

He will remain in police detention while he is questioned about the collision, which, according to the police, was witnessed by a number of witnesses who are urged to come forward.

Leicestershire Police said that a black Vauxhall Astra had left the roadway and struck the two teens.

A 37-year-old man was detained after a 14-year-old girl was murdered and another was injured in Leicester after being struck by a car.

Images depict the horrific collision that occurred when a black Vauxhall Astra mounted a grass verge.

Wednesday around 11 a.m., a car that went off the road near the intersection of Braunstone Lane and Mortimer Way struck and injured two girls.

A man in his 30s was transported to a hospital in Coventry for treatment of severe injuries.

Today, officers have remained at the intersection to conduct forensic work.

Due to the location of the deadly accident, a neighbor speculated that the victim was a local girl.

“The road was closed all day.”

At the scene, one of the youngsters was pronounced dead. The second victim sustained injuries that were neither life-threatening nor life-altering.

Community members have laid flowers and mementos at the girl’s grave.

The police are requesting the public’s assistance in determining what occurred. They suspect there were other people in the neighborhood at the time of the incident.

Another resident stated, “I’ve been working all day, and my son didn’t tell me about it until he got home from school.”

Another neighbor reported hearing the helicopter.

Detective Sergeant Lisa Wood of the Serious Collision Investigation Unit (SCIU) stated, “Although an arrest has been made in connection with this event, I would still like to talk with any witnesses who have not yet come forward.”

“From the inquiries conducted to date, we know that there were a number of persons in the neighborhood at the time of the incident. Please contact me if you live on Braunstone Lane and have CCTV or doorbell cameras installed.

‘Similarly, I’m still eager to speak with anyone who observed the Astra previous to the crash, as well as drivers with dashcams who have not yet spoken with police. Any information or film you have, regardless of how trivial you believe it to be, could be useful.’

You can report a road traffic incident by visiting https://www.leics.police.uk/ro/report/rti/rti-beta-2.1/report-a-road-traffic-incident and referencing incident 187 of 26 October. Optionally, dial 101.