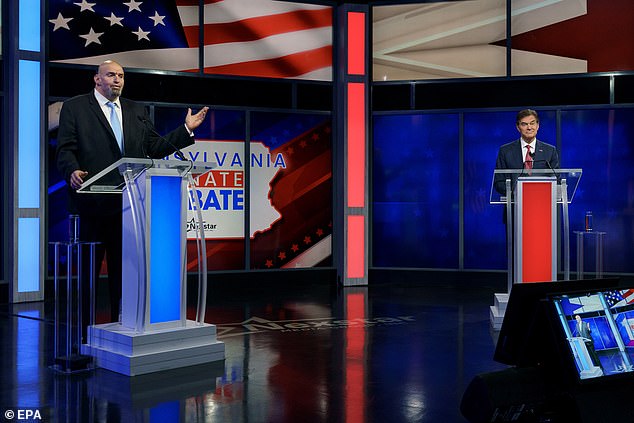 After Tuesday’s Pennsylvania Senate debate between John Fetterman and Dr. Oz, the campaign of the democratic candidate claimed to have raised more than $2 million.

It asserted this despite the fact that Fetterman appeared to have difficulty pronouncing his sentences during the discussion due to the effects of a stroke he suffered five months prior, as his opponents and supporters contend.

Tucker Carlson asserted on his Wednesday night program that the doctor who deemed Fetterman eligible for office after his stroke should have his medical license revoked.

Today, the campaign of Pennsylvania Lieutenant Governor John Fetterman for U.S. Senate revealed that it has raised more than $2 million since the Senate debate concluded at 9:00 p.m. last night.

In important cities, a portion of the funds will be utilized to promote a new television advertisement highlighting Dr. Oz’s exceedingly radical remarks on abortion from last night’s discussion.

Within twelve hours, his campaign released an online advertisement criticizing Oz’s statement that ‘women, doctors, and local government officials’ should all have a say on abortion.

It concludes, “Oz is too severe for Pennsylvania.”

Dr. Oz would let “local political leaders” like Doug Mastriano ban abortion without exceptions even in cases of rape, incest, or life of the mother.

Too Extreme for PA pic.twitter.com/q722qHwWsH

Oz continually brought up the subject of crime, whilst Fetterman attempted to paint Oz as out of touch with the typical Pennsylvanian by implying he owns ten homes.

At the beginning of the debate, Fetterman addressed his stroke and its influence on his speech, saying, “Let’s also talk about the elephant in the room, I had a stroke.”

‘He’ll never let me forget that,’ he continued.

The most obvious conclusion is why Clifford Chen continues to practice medicine. Carlson then suggested that Chen had blatantly lied when he claimed Fetterman was fit for office despite his stroke.

‘As a physician, are you permitted to lie for partisan purposes? Don’t we already have enough of that in the United States? Should physicians be permitted to do that? He was obviously lying.

Carlson maintained his accusations of favoritism among the Democratic party.

“Fetterman’s candidacy, like Joe Biden’s candidacy two years ago, tells us something dark about the Democratic Party,” Carlson said, attempting to draw parallels between Biden and Fetterman by arguing that they both can “barely speak.”

Carlson continues: “On November 9, you’ll be told that John Fetterman received 81 million votes in Pennsylvania, and you’ll be threatened with jail time if you don’t accept it. Why would they not do it? It was successful for Joe Biden.

»John Fetterman asserts he raised more than $2 in the hours following his argument with Dr. Oz«