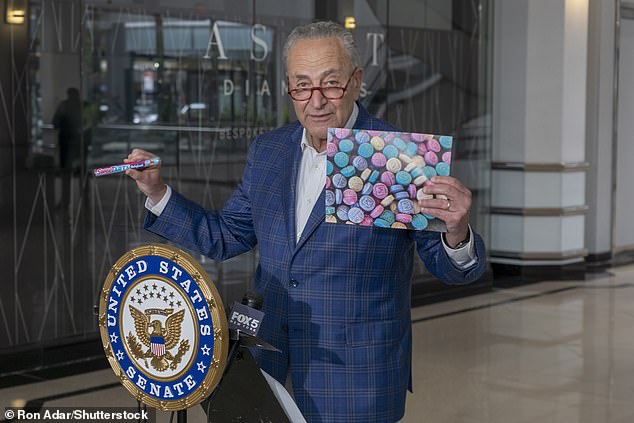 He has warned of the increased danger of “rainbow fentanyl,” which youngsters may mistake for candy in the lead-up to Halloween.

The New York Democrat stated in a news conference that the additional funds would go toward 61 Overdose Response Strategy teams to assist combat fentanyl, particularly the “rainbow” kind.

At a news conference on Sunday, Schumer displayed images of the candy and the lethal narcotic side by side and stated, “This is fentanyl, this is a Sweetart — you tell me the difference.”

Simply simply, Schumer added, “It is not candy.” The youngsters are far more likely to take it since they aren’t told it’s candy but are instead told, “Oh, this will give you a nice high,” and it appears harmless.

Our drug traffickers won’t stop until they have their way, so they’ve given this wicked substance the sickening nickname “Rainbow.” It’s filthy, it’s revolting,’ he said.

According to Schumer, the candy-like colored tablets have been available for roughly six months. According to the Centers for Disease Control, there were over 100,000 drug overdose fatalities in 2021, and the extraordinarily strong fentanyl was to blame for over 70% of those deaths. According to the CDC, the number of fentanyl-related fatalities has increased by 80% in the previous two years.

The substance is 50 times more potent than heroin, according to experts.

We are aware that one of these tablets is lethal. Schumer said, “That’s black and white, not multicolored. All health experts, including physicians and police officers, agree that this is one of the largest health concerns facing people right now.

In August, the Drug Enforcement Administration (DEA) reported that rainbow fentanyl had been discovered in 18 states.

According to DEA Administrator Anne Milgram, drug traffickers intentionally use rainbow fentanyl—fentanyl tablets and powder that come in a range of colorful colors, forms, and sizes—to encourage addiction in children and young people.

The Mexican drug cartels, who are in charge of the great bulk of the fentanyl being trafficked in the United States, are being defeated by the men and women of the DEA, who are fighting tirelessly to halt the trafficking of rainbow fentanyl.

A 13-year-old kid was detained earlier this month for the overdose of a middle school employee.

In response to an allegation from Chipman Junior High School that a kid was in possession of 150 fentanyl tablets posing as Percocet, the Bakersfield Police Department was called, according to BakersfieldNow.

When the manager took the pills away, they unintentionally overdosed—not by consuming the pills, but only by getting a whiff of them. The administrator was hospitalized after receiving Narcan from a neighborhood school police officer.

In the meanwhile, the Justice Department last week filed charges against two individuals from Maryland for distributing rainbow fentanyl in Skittles and Nerds packages.