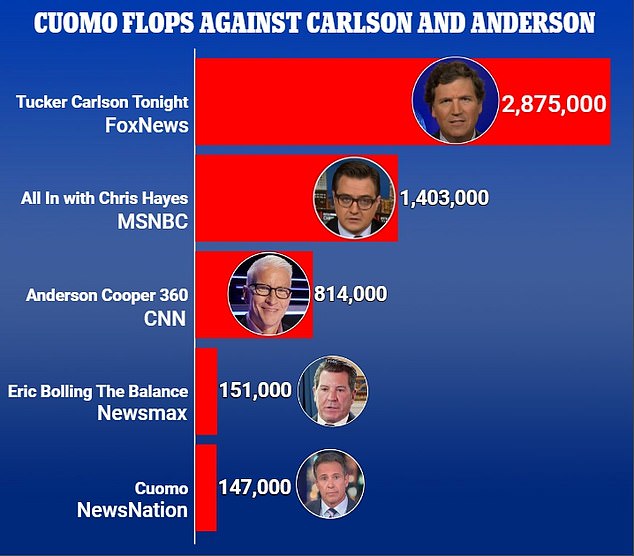 Since being fired by CNN in December, Cuomo has been absent from the realm of prime time news coverage and commentary. His return is marked by the new program.

Tucker Carlson of Fox News Channel With 2.875 million views on Monday, Tonight led the pack, exceeding the number of viewers Cuomo used to get for his CNN program.

With 1.403 million viewers, All in with Chris Hayes on MSNBC came in second, followed by Anderson Cooper 360 on CNN with 814,000 viewers. In comparison to Cuomo, which garnered 147,000 viewers, Eric Bolling’s Newsmax program The Balance drew 151,000 viewers.

The new program follows Cuomo’s termination from CNN in December of last year for assisting his brother Andrew in dodging sexual harassment accusations.

Cuomo was discovered to have called media in an attempt to find the people who were accusing his brother, according to an inquiry by the New York attorney general’s office.

According to a March article, Cuomo is suing the corporation for $125 million in unpaid compensation and harm to his reputation.

He said he had “learned lessons” and was “humbled by what transpired” on the new Monday night program. Additionally, he said that he was driven to improve on his prior performance, intending to “do more to not simply play, or even referee, the game.”

Cuomo already acknowledged that his comeback will be to a much smaller network, and last week he confessed as much in an interview with podcast presenter Kara Swisher.

His new yearly compensation of $1 million, which is much less than the $6 million he was making at CNN, reflects this fact, according to the New York Post.

Cuomo received a substantial travel budget when employed by CNN, which allowed him to fly back and forth between Manhattan and his residence in the Hamptons. Although NewsNation has constructed him a studio from which to broadcast the program in the city at their 42nd Street bureau, it is unclear what kind of compensation he will get from them.

Cuomo’s CNN program The most watched prime time news program in 2019 and 2020 was Cuomo Primetime. In 2020, it had a 2 million nightly audience average. Back then, the channel was doing better than it is today.

Cuomo rose to prominence for his coverage of the Covid-19 epidemic, and the program often included portions with his brother Andrew Cuomo, who at the time was the governor of New York and in charge of the state’s Covid-19 response.

But shortly after his elder brother’s downfall at the end of 2021 because to charges of sexual misconduct, he was sacked from CNN.

The Washington Post stated that NewsNation, a news network underdog, averaged 46,000 viewers during prime time in 2017.

The new channel was introduced in September 2020 by Nextar Media Group with the aim of being impartial and neutral and attracting people who fell somewhere in the center of the political spectrum. Since its formal premiere there last year, NewsNation has been unable to draw in a following.

Cuomo nonetheless garnered more than three times that amount on Monday night, but he now has a tough task ahead of him if he hopes to survive the hit he took in December.

Insiders claim that bosses at NewsNation would think highly of Cuomo’s compensation if he can routinely average 100,000 viewers every episode.