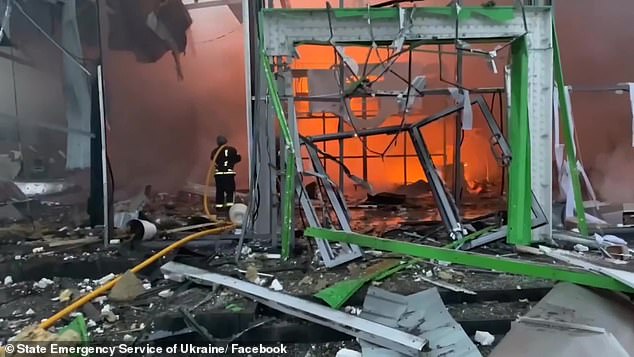 As air raid sirens continued to scream around the nation for a second day, violent hardliners in Russia pushed Putin to bomb Ukraine “into a 19th century country.”

At least 19 people were killed and 105 were injured when 84 missiles launched by Kremlin forces early on Monday morning impacted almost every major Ukrainian city. Later that night, other explosions in Zaporizhzhia devastated houses and schools.

It happened just after Putin’s war hawks praised his new, no-holds-barred strategy for the conflict and urged him to escalate it by bombing Ukraine until Kyiv “begged for mercy” on state television.

I believe that everyone can now see that a “red line” has been crossed.

“All European countries have immediately asked for the evacuation of their embassies from Kiev.

They understand that this won’t end with today and that the winter in Ukraine will be disastrous.

Konstantin Dolgov, a former Russian commissioner for human rights, also pushed Putin to continue the barrage, jokingly asking TV viewers whether they had started complaining. Are they yet howling?

Alexander Artamonov, a defense specialist, predicted that Western predictions that Russia would run out of missiles would never materialize. They’ll go on forever.

Given that Ukrainian society is now, in my opinion, psychiatrically unwell, the pro-war zealot maintained that systematic strikes must continue. People are not given weapons in psychiatry.

Surely, they get medical attention, and naturally, they need to receive necessities, but anything that might be used as a weapon—a vehicle, a knife, a pistol, or anything else—must be taken.

Therefore, there won’t be a means to get troops to the front lines if bridges are destroyed and the railroads are too.

Russian authorities and pro-Kremlin journalists, who have recently lambasted the Russian military for a string of humiliating defeats on the battlefield, celebrated Moscow’s blitz of missile attacks on cities all throughout Ukraine.

Commentators and war reporters praised the strike on Monday as a fitting and long-overdue reaction to Ukraine’s successful counteroffensive in the northeast and south as well as an attack over the weekend on a crucial bridge between Russia and Crimea.

According to Tatyana Stanovaya, the head of the independent R.Politik think-tank, “Putin’s initiative is waning and he is becoming more reliant on circumstances and people who are crafting the “win” (in Ukraine) for him,” in a remark posted online on Monday.

For weeks, Putin’s followers have urged immediate action in the conflict in Ukraine. After an explosion on the Kerch Bridge, which connects Crimea to Russia, shocked the world, these calls increased throughout the weekend.

The longest bridge in Europe was inaugurated by Vladimir Putin in 2018 and serves as a major representation of Russian military power.

‘And?’ Margarita Simonyan, the head of the government-sponsored RT channel, questioned Moscow’s reaction to the assault on the bridge on social media.

Alexander Kots, a war journalist for Russia’s well-known pro-Kremlin tabloid, Komsomolskaya Pravda, stated, “This is one of those occasions when the nation has to prove we can strike back.”

“It’s time to fight!” brutally, even ferociously. Without looking back at any criticism from the West,” prominent Russian legislator Sergei Mironov, head of the government-backed A Just Russia party, tweeted on Saturday.

There won’t be any harsher punishments. They won’t use any harsher language. We must accomplish our tasks. We should finish it because we began it. There’s no turning around. It’s time to reply!

The strikes, which targeted 15 Ukrainian cities, the majority of which were regional capitals, destroyed highways, railway stations, and water systems, as well as electricity lines.

Russian rockets detonated in the center of Kiev, dangerously close to government buildings, for the first time in months.

Putin said on Monday that the assaults were in reprisal for what he described as Kyiv’s “terrorist” acts against the Kerch Bridge, and he promised a “strong” and “proportionate” reaction should Ukraine launch any operations that endanger Russian security.

Nobody should be able to question it, he said.

Ramzan Kadyrov, the strongman ruler of the Russian province of Chechnya in the North Caucasus, said that he is now “100% delighted” with the progress made by the Kremlin’s “special military operation.”

In Ukraine, he was one of the most vociferous supporters of “more extreme measures,” even advocating the use of low-yield nuclear bombs.

Sergei Aksyonov, the Crimean governor appointed by Moscow, referred to the strikes as “excellent news.”

However, the cheers from Kremlin backers also included requests that Putin and the Russian military continue the speed and severity of the assaults and harm done to Ukraine’s infrastructure.

In his remarks, Aksyonov emphasized that “had such steps been taken daily to demolish the enemy’s infrastructure, we would have completed everything in May and the Kyiv dictatorship would have been overthrown.”

After sharing a video of himself dancing on a balcony while wearing a cap with a Z, RT’s top presenter Anton Krasovsky said in a subsequent Telegram message that the damage to Ukraine’s power lines was “not enough! Too little!

The strikes on Monday were “a natural move, which not only the public has long requested But the military circumstances necessitated a fresh approach to the hostilities,” according to Andrei Medvedev, a separate state TV correspondent.

This is what happened. But has there been much change? Medvedev, a member of the Moscow City Council and an employee of Russia’s official television network VGTRK, posted a message on Telegram.

“Yes, it does alter if the strikes against the key infrastructure become routine, if the strikes on railroads, bridges, and power plants become a part of our strategy” (the situation).

However, for the time being, it seems from (official) remarks that no decision has been taken to return Ukraine to the Middle Ages,’ Medvedev wrote.

In a Telegram message on Monday, political expert Stanovaya underlined that “strong pressures” had been applied to Putin “to go onto aggressive steps, big bombs,” which had caused him to act.

As of right now, it may be said that Putin was convinced to adopt a more confrontational stance. And that is consistent with how he perceives the circumstances. But there is no turning back; it’s a steep slope,” wrote Stanovaya.