Skip to content
Go Home «» News «» World News «» After being chastised for not calling before Hurricane Ian, Biden spoke with DeSantis 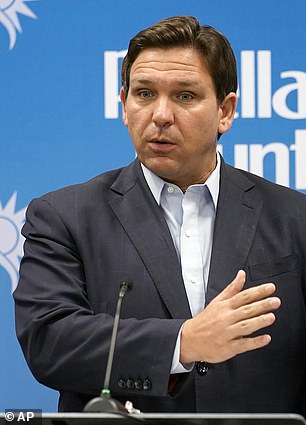 After the president came under fire for not contacting the Republican governor prior to Hurricane Ian making landfall in Florida, Joe Biden contacted Ron DeSantis on Tuesday night.

According to the Florida governor’s daily itinerary, which was made public on Tuesday evening, the conversation took place at 6:30 p.m., many hours after the White House briefing when his spokeswoman was questioned about the lack of contact.

On Tuesday, Hurricane Ian was upgraded to a category 3 storm, and by the time it makes landfall on the Florida Gulf Coast on Wednesday night, it may have strengthened to a category 4 storm. Already, winds are exceeding 125 miles per hour.

On Tuesday, Biden had conversations with the two Democratic and one Republican mayor of three Florida municipalities on the western coast of the Sunshine State, prompting questions as to why he had not spoken with DeSantis directly.

During the press conference on Tuesday, his administration avoided queries about the reason the call hadn’t occurred yet.

In the last two years, while other Republican governors’ states were also experiencing weather-related problems, Biden has spoken on the phone with Kay Ivey of Alabama, Asa Hutchinson of Arkansas, and Greg Abbott of Texas.

At the White House press conference on Tuesday, FEMA Administrator Deanne Criswell said that contact between President Biden and Governor DeSantis’ administration had “zero” influence on how her agency operates.

When a reporter questioned Criswell on Tuesday, she said that “President Biden has previously called governors in instances like natural catastrophes.” “Can you explain how these decisions are made and why the president hasn’t called the governor in this case?”

Criswell sidestepped the question by mentioning that she had spoken with DeSantis on Friday and had assigned senior members of her staff to work with the governor to assist in addressing the issues brought on by the approaching storm.

According to Criswell, “The president is extremely concerned about ensuring that the federal family has the appropriate resources available to assist this.”

“That is why I immediately phoned the governor, and we have a team of my senior leadership that is embedded with the governor to make sure that we’re supporting that,” the governor said.

Our first concern now is ensuring that the appropriate safeguards are in place, she said.

Criswell cited the fact that “Governor DeSantis’ pre-landfall emergency declaration request was signed by President Biden on Saturday” as more evidence of cooperation between the federal government and Florida authorities.

Criswell declined to provide a straight response when asked why Biden called mayors and not the governor.

We now have a solid staff in place to help the governor, she said.

DeSantis has become the prospective GOP presidential nominee and has emerged as the party’s future face. He has also become quite a contentious character, which was only made worse when he earlier this month flew 50 migrants to the island of Martha’s Vineyard on a private jet.

White House Press Secretary Karine Jean-Pierre opened Tuesday’s briefing by saying, “The FEMA Administrator and I just came out of the Oval Office where the President also held separate calls with Mayors Jane Castor of Tampa, Mayor Ken Welch of St. Petersburg, and Mayor Frank Hibbard of Clearwater.” She then turned the microphone over to Criswell.

They spoke about preparing for Hurricane Ian, she continued.

This week, Hurricane Ian was downgraded to a category 3 storm because of its impending landfall near Tampa on Florida’s Gulf Coast on Wednesday night or Thursday early.

According to AccuWeather, it may become a category 4 hurricane by the time it reaches shore.

Criswell insisted repeatedly that the two’s failure to communicate would not affect how FEMA and other organizations responded to the hurricane as other reporters sought to understand why Biden and DeSantis had not communicated.

In response to a reporter’s question on the two’s lack of communication, Criswell said, “We’re going to support anything Governor DeSantis wants of us.”

We approved his emergency declaration hours after he submitted it, she continued. “We’ll keep doing it as we monitor the storm’s effects,” the speaker said.

Criswell said, “Zero,” when asked whether the contact between Biden and DeSantis’ administration had any “effect on how you guys function.”

»After being chastised for not calling before Hurricane Ian, Biden spoke with DeSantis«