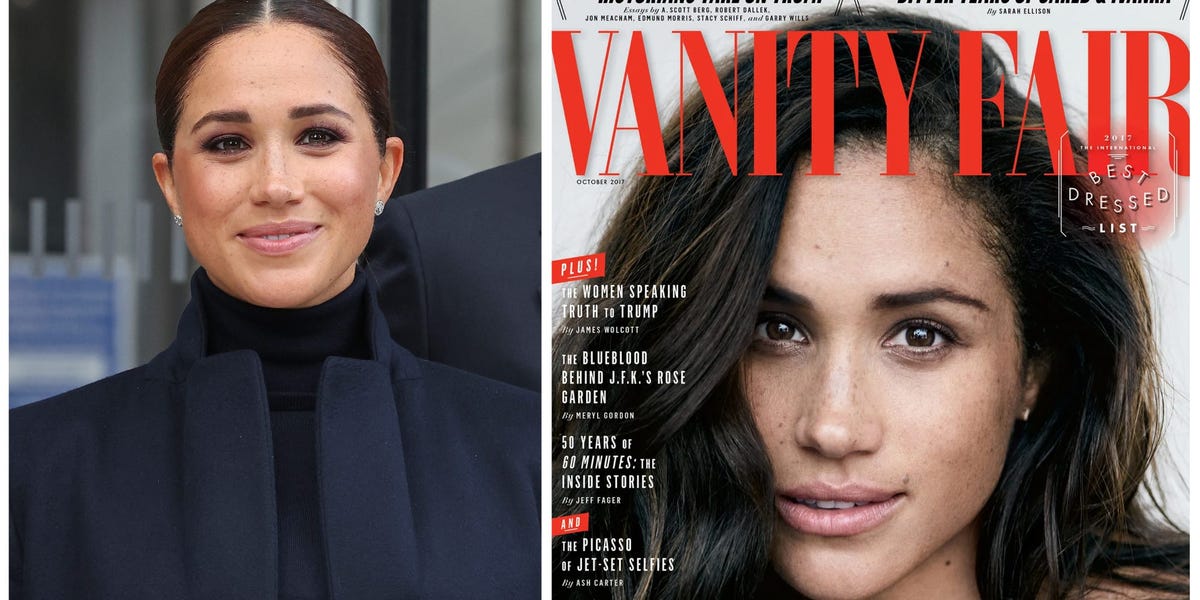 According to royal biographer Valentine Low, the Duchess of Sussex accused Vanity Fair of crafting a “racially motivated” headline after she posed for its cover in 2017.

Meghan Markle first discussed her connection with Prince Harry in the September 2017 issue of the magazine, which was penned by Sam Kashner and titled “Wild About Harry.”

“Courtiers: The Hidden Power Behind the Crown,” Low’s new book about the royal family, was released on Thursday in the UK. Low writes in his book that an unidentified source informed him that Meghan was furious by the news because “it was about Harry, not her.”

Meghan Markle and Prince Harry viewed the headline as discriminatory, according to Low.

Meghan and Prince Harry were reportedly unhappy with the headline and pointed out its similarities to the song “I’m Just Wild About Harry,” which Judy Garland and Mickey Rooney performed in blackface in the 1939 film “Babes in Arms.” On the magazine’s cover, the article’s headline read, “She Can’t Get Enough of Harry!”

Prince Harry and Meghan Markle will attend the 2019 Trooping the Colour.

According to a source of Low’s, the couple attempted to have Vanity Fair remove the digital version’s headline because they believed “it was racially motivated.” “Meghan Markle, Wild About Harry” is still the online headline at the time of writing.

Low is a royal journalist for The Times of London, covering the royal family since 2008, according to his profile on the newspaper’s website. The author of “Courtiers” stated in the book’s acknowledgments that he conducted around 100 interviews with informants who had worked in various royal homes from the 1960s to the current day.

Meghan and Harry have already discussed what they characterized as racist treatment by the British press. In 2016, Harry issued a formal statement criticizing the media for “racist undertones” in headlines about the then-actress.

A spokesman for Harry stated at the time, “His girlfriend Meghan Markle has been the target of a wave of abuse and harassment.” The slander on the front page of a national newspaper, the racist undertones of comment pieces, and the outright sexism and racism of social-media trolls and web-article comments have all been very public.

The following year, in an interview with Oprah Winfrey, Harry and Meghan stated that racism in the British tabloids directed at the duchess played a “major” role in their choice to leave the United Kingdom the previous year.

A distinct royal book asserts Meghan severed her friendship with the journalist who authored the cover article for Vanity Fair.

In recent months, Low is hardly the only author to have covered Meghan’s Vanity Fair tale.

Bower stated in his July-released book “Revenge: Meghan, Harry, and the War between the Windsors” that Meghan was furious that the writer who interviewed her did not include a story about the time she forced Procter & Gamble to remove their sexist dish soap commercial.

Bower said in his book that Kashner omitted the item because Vanity Fair’s fact-checkers questioned its veracity.

According to the book, Meghan told Kashner, “I believed this would have been a real friendship.” “I no longer believe that to be feasible.”

However, Kashner later refuted several of the claims included in Bower’s book, including that he believed Meghan was manipulating him when they first met and that she liked him because he stuttered.

Kashner wrote in the July letters section of The Times of London that Bower did not express his “admiration and respect” for Meghan.

“I thought Ms. Markle to be exceedingly warm and cordial, and I appreciated her brains and extraordinary grit,” he stated. Kashner expressed disappointment that Meghan’s narrative was omitted because “I wanted to showcase her lifetime of action.”

Representatives for Vanity Fair, Sam Kashner, and the Duchess of Sussex did not react promptly to an inquiry from Insider.