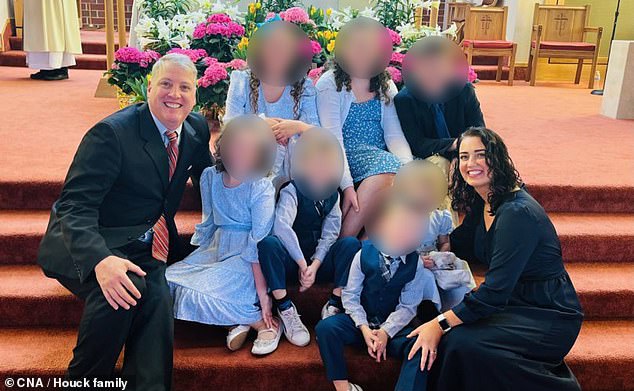 After he reportedly beat an elderly man twice at a Planned Parenthood clinic in 2021, a Catholic pro-life activist was taken into custody on Friday by a “25-man armed SWAT squad” at his house in Pennsylvania.

The King’s Men ministry, which promotes the spiritual growth of young men, was co-founded by Mark Houck, 48. On October 13, 2021, at the Planned Parenthood Elizabeth Blackwell Health Center on Locust Street, he is accused of hurting a volunteer who was 72 years old.

When cops arrived to serve the warrant with “guns aimed” at her seven children, Ryan-Marie, Mark’s wife, told of the horrifying arrest.

Ryan-Marie told the Catholic News Agency, “A SWAT squad of approximately 25 arrived to my home with about 15 cars and began hammering on our door.” If he didn’t open it, they threatened to break in. They then aimed around five firearms at my husband, myself, and essentially my kids.

She subsequently admitted to LifeSite, “The kids were simply screaming.” “It was just really stressful and frightening.”

According to the Houck family’s fundraising page, Mark pushed the 72-year-old because the guy would not leave him and his 12-year-old kid alone.

According to the fundraising page, the elderly employee started to harass Mark and his kid while they were praying outside the clinic. The two then made the decision to leave the clinic, and the wailing employee followed them out into the street.

After the senior refused to leave the pair alone, the ministry worker then shoved him.

According to a statement from the Department of Justice, “in the first incident, B.L. was trying to assist two patients from the clinic when the defendant slammed B.L. to the ground with force.”

In the second incident, “the defendant verbally reprimanded B.L. and then violently slammed B.L. to the ground in front of the Planned Parenthood clinic, injuring B.L. and necessitating medical care.”

Later, a Philadelphia FBI representative refuted the allegations that a SWAT squad was present during Mark’s arrest.

According to an FBI official, “there are false accusations being made about the arrest of Mark Houck.”

No SWAT personnel or teams were engaged.

The FBI knocked on Mr. Houck’s front door, introduced themselves, and requested him to leave the house. He did so, and after an indictment, he was hauled into jail without incident.

The representative also labeled the assertion that 25 people were there at the moment of Mark’s arrest “an overstatement” and refuted it.

According to the Department of Justice, Mark may get up to 11 years in prison, three years of supervised release, and penalties of roughly $350,000 if found guilty.

Some Mark fans, like Catholic hero Chris Stefanick, were horrified to hear of the circumstances surrounding his imprisonment.

Mark Houck, a friend’s brother-in-law, leads a men’s ministry and ministers to women outside an abortion clinic in Philadelphia.

He doesn’t shout or lock himself to the front door. He has supported the youngsters he has helped and saved lives. He is the genuine thing.

In front of his wife and children, a SWAT squad knocked through his door on Friday and shoved a pistol in his face for “restricting access” to an abortion clinic, Stefanick added. He never did, however.

Completely bogus accusations made against an individual who presents no danger in order to call in the SWAT squad.

For the record, assaulting someone in an abortion clinic is NEVER acceptable. It IS reasonable why you would push a pervert away from your kid in number two. You’re not inherently a victim just because you’re 72. Being 12 and feeling threatened by sexual remarks does.

Others blamed President Biden’s administration for the “weaponization of the FBI” and his “abuse of authority” against Americans.

According to a statement by Pennsylvania Senator Doug Mastriano, “Mark and Ryan-Marie Houck’s seven children were horrified and in tears as they saw their parents seized at gunpoint and their father carried away in handcuffs.”

Ronny Jackson, a congressman from Texas, said, “The FBI became Biden’s secret police.” Every American should be terrified if the government sends a small army of highly armed agents to attack Mark Houck’s house. The FBI must stop targeting conservatives with threats and intimidation.

A potential term of 11 years in jail, three years of supervised release, and penalties up to $350,000 are now the possible outcomes for Mark Houck. All because he knocked a Planned Parenthood volunteer who had invaded his son’s personal space and shouted obscenities to the ground, said a second supporter.

Some people weren’t against Mark’s arrest after the accusations, however.

One user tweeted, “I don’t care if Mark Houck had thirty kids and lived in a shoe, if he attacked an elderly citizen, he gets jailed.”

Someone another said, “Mark Houck is a THUG! It doesn’t matter how many children he has. He abused a guy who was 72 years old! He should be in prison! He ought to have been detained right away.