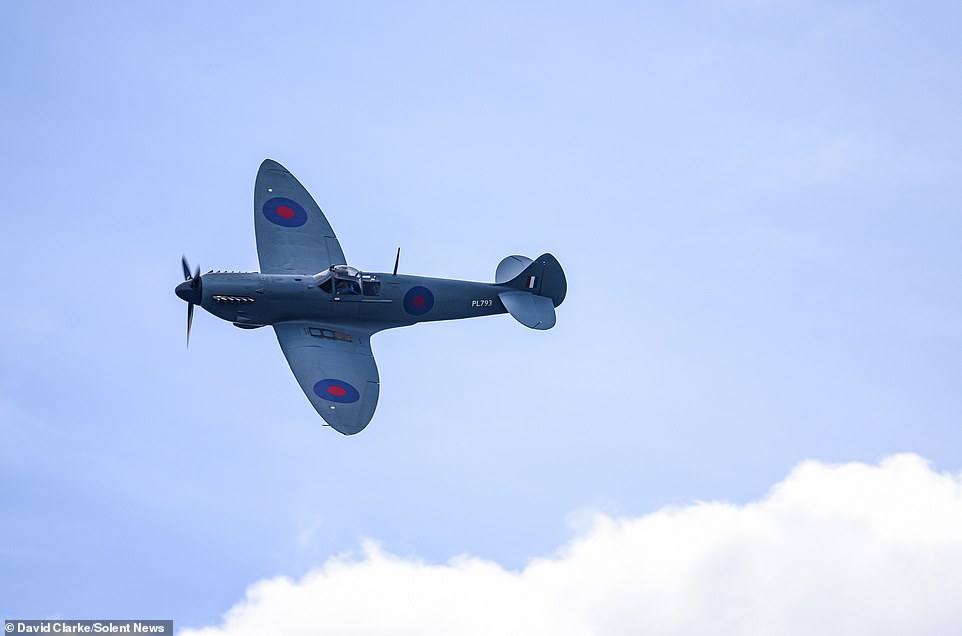 After more than ten years of construction, a Second World War enthusiast has been given the go-ahead to fly his exact replica of a Spitfire.

In a barn at his house, retired engineer Steve Markham spent an incredible 11,250 hours painstakingly putting the “iconic” British aircraft together with the help of his wife Kay.

The qualified pilot, who was inspired by the classic film Reach for the Sky as a child, has now received the official go-ahead to fly the hand-built plane 16 years after he first began the project.

Mr. Markham has his sights set further afield, despite the fact that his initial itinerary calls for the couple to cross the Solent to the Isle of Wight for ice cream.

Now I can fly anywhere, he declared. I could take a day trip to Scotland, but I could also bring my wife.

“I’m going to the Isle of Wight for ice cream on my first flight.” We’ll travel around the Isle and across the Solent.

The next lengthy flight will be to Scotland because my wife has Scottish relatives and we want to visit them at some point.

“The aircraft has enough range to travel nonstop from here to Rome.” I’m going to rise early in June when the days are longer and take a flight to Rome.

I’m going to treat my wife to a nice Italian lunch and then fly home that same day.

The PL793, a photo reconnaissance Spitfire, which was based at RAF Odiham in Hampshire during the final year of the war, is replicated in the 200 mph aircraft.

After watching the movie biography of aviator Douglas Bader, Mr. Markham, who lives close to the base, claimed to have fallen in love with the renowned fighter plane.

Since I was eight years old and I watched Reach for the Sky, I’ve wanted a Spitfire, he claimed.

“The PL793 was the most effective RAF aircraft stationed at Odiham.”

They were given blue paint to help them blend into the sky. They were the espionage aircraft of the day, and as a result, not much is known about what they accomplished.

They stood out among the others. In honor of their incredible effort, I created my model. It is an homage.

“The lives of my age would have been substantially different without the RAF and their achievements in World War 2.” We owe them a lot of money.

Mr. Markham, a licensed pilot since the 1970s, had previously attempted to purchase historical aircraft but was always outbid, so he decided to make his own.

In 2006, he purchased a kit for the airplane’s chassis, but he purchased the engine components, propellers, and paint independently.

Everyone who has ever flown a Spitfire has praised how fantastic it is to fly, he added, calling it one of the most famous aircraft.

“If you want to purchase an actual Spitfire from World War II, it now costs between two and four million pounds.” This is a far more affordable method of doing things.

It was a “difficult beast” to put together, according to him, and some pieces had to be changed since they didn’t fit correctly.

Mrs. Markham created the leather upholstery and assisted him in installing the rivets, which needed two persons to do.

She has been really supportive throughout the whole process, he added.

Over time, knowledge of his aircraft quickly spread, and he received requests from individuals wanting to view it in the beginning stages, which slowed down the process.

“I would say sure, you can come see it,” he added. However, it did require pausing construction of the aircraft for periods of 30 minutes to an hour. It made what needed to be done take longer.

In 2017, he finished building the Spitfire. However, it took five years for the Civil Aviation Authority to issue a complete flying authorization.

It was flown by a test pilot in 2018, but it had to return to his shop for repairs because the engine overheated.

Later test flights were limited to a 35 nautical mile radius around the airstrip and were prohibited from carrying people.

After successfully completing the test flight program in July of this year, Mr. Markham was given permission to go further and with company.

Since he began building, he has been requesting donations for the RAF Benevolent Fund, which aids current and past RAF personnel as well as their families.

Mr. Markham had a roll-out celebration for the replica when it was initially constructed, inviting 200 guests and raising £4,000 for the RAF charity.

In exchange for helping him, the RAF granted him access to an airport for test flights.

He provided parachute training simulators to the RAF for ten years before he retired, and he was “always welcomed into the RAF community.”

“It feels wonderful.” It’s stunning. Very quickly, in fact. It moves along nearly twice as quickly as the other planes I’ve flown. It is something unique.

The first Mk Is Spitfire, K9789, started flying with 19 Squadron at RAF Duxford in August 1938, becoming the first Spitfire to enter operational service.

During the Battle of Britain, when they were primarily assigned for taking down German fighters while the slower Hurricanes were deployed to attack the bombers, they became famous.

There were 24 markings and several sub-variants of the Spitfire during its production run.

These discussed the evolution of the Spitfire from its Merlin to Griffon engines, as well as high-speed photo-reconnaissance versions and various wing designs.

6,487 Spitfire Mk Vs in total, followed by 5,656 Mk IXs, were produced in greater numbers than any other model.

It is believed that there are just 54 Spitfires in operational condition worldwide. A Mark 1 Spitfire with the serial number K9942 is the oldest Spitfire still in existence. It is kept in storage at the RAF Museum Cosford in Shropshire.