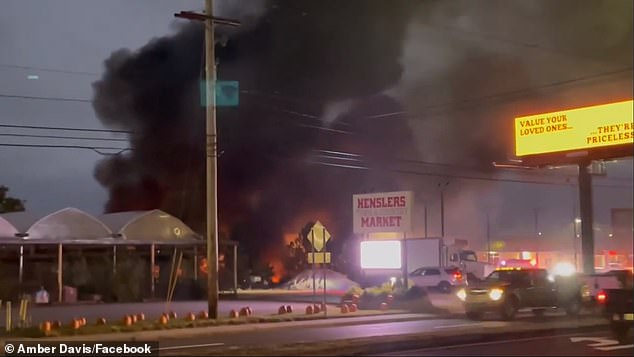 A tiny commuter aircraft with a capacity for 10 passengers crashed into an Ohio auto dealership on Tuesday morning, leaving two people dead.

The 1974 Beechcraft King Air E90’s pilot and one other person were killed when the plane collided into a car lot at 1000 Pike Street in Marietta. Before it crashed at 7 a.m., the aircraft, which belonged to Intel Management, was flying from Columbus, Ohio, to Parkersburg, West Virginia.

The collision seems to have occurred between the Hensler’s County Market and the Pioneer Buick GMC vehicle dealership. Witnesses could spot the wreckage of the jet among the eight on fire automobiles at the dealership.

Latoya Rashcelle posted a video of the disaster scene along with the statement, “I actually just saw this jet crash.” It was flying in the sky when it performed a number of flips before falling to the earth.

On the ground, there were no injuries noted. How many passengers there were aboard the aircraft is unclear.

As the situation clears, commuters are urged to stay off the SR 7 between I-77 and Browns Road.

At the scene of the collision are police and fire crews from Williamstown and Reno.

Marietta, which is approximately 105 miles southeast of Columbus and just above the West Virginia border, has a population of around 13,385 people.

The inquiry is still underway.