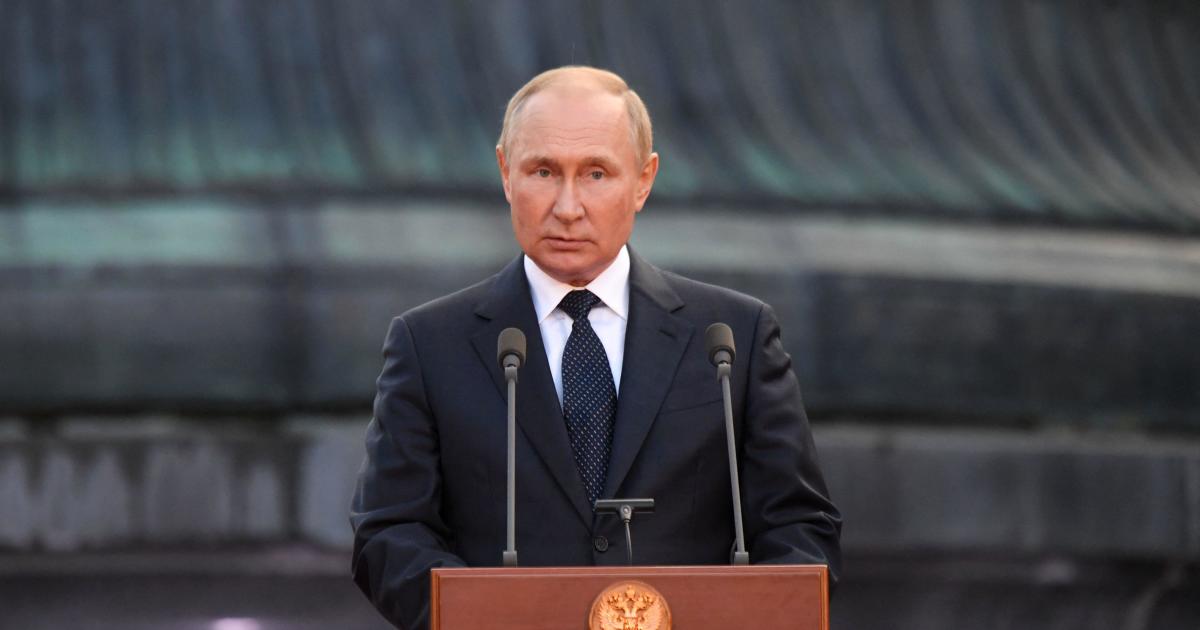 Vladimir Putin, the president of Russia, said that he would enact legislation absorbing portions of Ukraine despite international criticism and would use “all possible measures” to preserve the newly merged territories.

In a speech before the signing of a pact to annexe four regions of Ukraine to Russia, Putin issued a warning that his nation would never cede the seized territories and would safeguard them as a part of its sovereign territory.

He pleaded with Ukraine to hold negotiations to put a stop to the conflict, but he issued a harsh warning that Russia would never cede sovereignty of the provinces of Donetsk, Luhansk, Kherson, and Zaporizhzhia.

He said that the West was instigating the fighting as part of a scheme to subjugate and colonize Russia.

Volodymyr Zelenskyy, the president of Ukraine, responded to his action by announcing that his country will be submitting a “expedited” application to join the NATO military alliance. Ukraine has long sought membership in NATO, but neither the organization nor Zelenskyy’s application received an instant response.

Putin has long urged that Ukraine never be let to join NATO, and his government has been incensed by the neighboring nations of Finland and Sweden joining the Western military alliance.

The event takes place three days after the conclusion of Kremlin-organized “referendums” on joining Russia, which Kyiv and the West denounced as a blatant land grab, done under duress, and founded on fabrications.

Antonio Guterres, the secretary-general of the UN, denounced the Russian action in a statement on Thursday.

He said, “The UN Charter is explicit. Any annexation of a State’s territory by another State brought about by the threat or use of force is against international law and the UN Charter’s guiding principles.

The ceremony was planned for Putin and the leaders of the four regions of Ukraine to sign treaties for the territories to join Russia, in a major escalation of the seven-month war, in the Kremlin’s magnificent white-and-gold St. George’s Hall.

Moscow has supported the separatist Donetsk and Luhansk areas in eastern Ukraine ever since they proclaimed their independence in 2014, only weeks after the Crimean Peninsula was annexed by Russia. Russia quickly took control of the southern Kherson area and a portion of the adjoining Zaporizhzhia region when Putin launched soldiers into Ukraine on February 24.

The treaties for the regions to join Russia will be ratified by both chambers of the Kremlin-controlled Russian parliament next week, and then sent to Putin for his approval.

Putin and his lieutenants have sternly cautioned Ukraine against launching an effort to retake the areas, claiming that Russia would see such a move as an attack on its sovereign territory and would not hesitate to retaliate using “all measures available,” a clear allusion to Russia’s nuclear weapons.

Putin is attempting to prevent more setbacks in Ukraine that might endanger his 22-year reign by organizing the elections in Ukraine and issuing the nuclear alert.

The majority of the Luhansk and Kherson areas are under Russian control, as well as around 60% of the Donetsk region and a sizable portion of the Zaporizhzhia region, where it has taken control of the biggest nuclear power plant in Europe.

When questioned about its objectives, Dmitry Peskov, a spokesperson for the Kremlin, said that Moscow at the very least wants to “liberate” the whole Donetsk area.
The Kremlin was on the approach of another painful war defeat as it prepared to celebrate the absorption of the captured Ukrainian areas, with rumors of the impending Ukrainian encirclement of the eastern city of Lyman.

Regaining control of it may pave the way for Ukraine to advance further into one of the districts that Russia is absorbing, an action that would likely be considered unlawful and would usher in a perilous new stage in the seven-month conflict.

On Friday, Russia also bombarded Ukrainian cities with missiles, rockets, and drone suicide attacks; one of these attacks is said to have killed 25 people. The combined salvos made up the largest attack Russia has fired in recent weeks.

They did so in response to experts’ predictions that Putin was likely to intensify strikes, draw more heavily from his limited supply of precise weapons, and escalate the conflict in an effort to erode Western support for Ukraine.

The Kremlin issued another warning to Ukraine, telling it not to struggle to reclaim the four territories, before its planned annexation ceremony on Friday. A Ukrainian strike on the captured land, according to Kremlin spokesperson Dmitry Peskov, would be seen as an act of aggression against Russia itself.

The annexations are an effort by Russia to cement its achievements, at least on paper, and frighten Ukraine and its Western allies with the threat of a confrontation that would only become worse if they don’t back down, which they have no indications of doing.

With “referendums,” often held under duress, the Kremlin prepared the ground for land grabs that Ukraine and Western countries generally denounced as manipulated shams.

“It seems really pitiful. While the Kremlin constructs some kind of virtual reality that is unable to react in the actual world, Ukrainians are acting and moving in the real world “Political analyst and former Kremlin speechwriter Abbas Gallyamov remarked.

People are aware that politics is now being fought on the front lines, he said. “Who advances and who retreats is what matters. In that regard, the Kremlin is unable to provide Russians with any consolation.”

A Ukrainian counteroffensive has stripped Moscow of its military superiority. Its control over the Luhansk area seems to be eroding as Ukrainian soldiers advance there and attack Lyman in a pincer motion. Additionally, Ukraine continues to maintain a sizable presence in the nearby Donetsk area.

Fighting has plagued Luhansk and Donetsk ever since rebels there proclaimed their independence in 2014; together, they make up the larger Donbas area of eastern Ukraine, which Putin has long promised to fully annexe. According to Peskov, Donetsk and Luhansk will be fully merged into Russia on Friday.

In the first stages of the invasion, all of Kherson and a portion of Zaporizhzhia, two additional areas being planned for annexation, were freshly taken. It’s uncertain whether the Kremlin will claim all of that captured region as Russian territory or just a portion of it. In a call with reporters on Friday, Peskov remained silent.

According to Kyrylo Tymoshenko, the deputy head of Ukraine’s presidential office, anti-aircraft missiles that Russia has converted into ground-attack weapons rained down on people Friday who were waiting in cars to cross into Russian-occupied territory in order to bring family members back across front lines.

According to the general prosecutor’s office, 50 persons were also injured. The attack killed the occupants of the lined-up trucks in the aid convoy and left deep impact craters and shrapnel trails in its wake. Buildings close by were destroyed. The corpses were covered with trash bags, blankets, and, for one victim, a towel covered in blood.

Ukrainian military were accused for the attack by Russian-installed authorities in Zaporizhzhia, although they offered no supporting information.

There have also been reports of Russian attacks in Dnipro. Valentyn Reznichenko, the regional governor, said that five people had been hurt in addition to at least one death.

Mykolaiv and Odesa in southern Ukraine were also attacked, according to the Ukrainian air force, by Iranian-made suicide drones that Russia has been using more often lately, ostensibly to prevent losing more pilots who don’t have control of Ukraine’s airspace.

At the ceremony to formally annex Luhansk, Donetsk, Kherson, and Zaporizhzhia to Russia, Putin was scheduled to deliver a significant address. In the elaborate St. George’s Hall of the palace in Moscow that serves as Putin’s seat of power, the Kremlin arranged for the region’s pro-Moscow governors to sign annexation treaties.

Putin also signed proclamations recognizing the purported independence of the Kherson and Zaporizhzhia regions, after actions he made earlier for Crimea, which was taken from Ukraine in 2014, Luhansk, and Donetsk in February.

While everything was going on, Russian President Vladimir Putin criticized the most recent Ukrainian attacks and convened an emergency meeting of his National Security and Defense Council.

He said on his Telegram channel, “The adversary rages and wants vengeance for our perseverance and his failures.” “You will undoubtedly respond. For each Ukrainian life lost!”

As the Kremlin follows the same annexation strategy employed for Crimea, the United States and its allies have pledged even more sanctions on Russia and further help for Ukraine worth billions of dollars.

Ukraine has vowed to retake all seized territory, while Russia has vowed to protect its gains, threatened to use nuclear weapons, and mobilized an extra 300,000 soldiers despite protests. As a result, the two countries are on a collision path that is only going to become worse.

The battle for Lyman, a crucial hub for Russian military activities in the Donbass and a prize sought for in the Ukrainian counteroffensive began in late August, served as a reminder of this.

He said that “Ukraine’s military formations are working really hard to ruin our joy.”