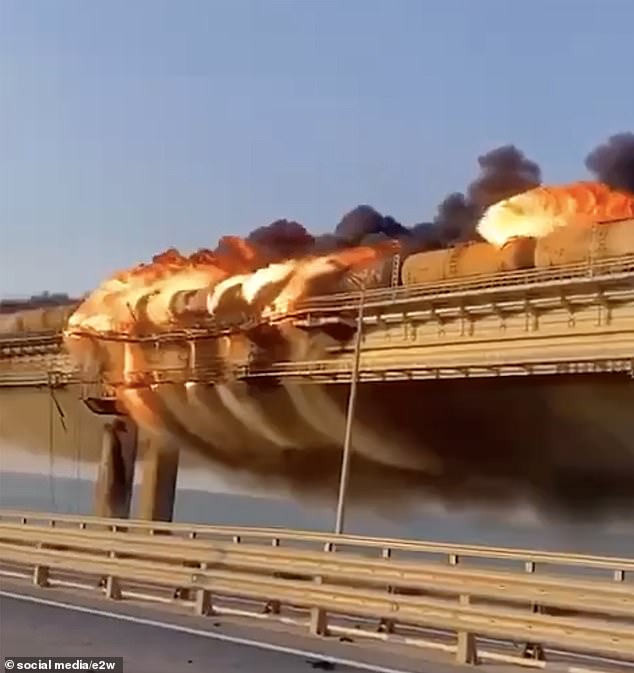 This morning, a senior Ukrainian presidential aide asserted that one of Vladimir Putin’s armed commanders may have been responsible for the explosion that damaged a crucial bridge in Crimea.

The 18-kilometer passage over the Kerch Strait connects Crimea to the Russian mainland and serves as a crucial conduit for Putin’s forces that hold the majority of southern Ukraine’s Kherson area and the Russian naval port of Sevastopol.

It was damaged by an explosion early on Saturday morning, which caused pieces of the bridge to collapse into the water and a massive fire to erupt.

Video footage of the bridge appeared to show an unexplained wave crest beneath the structure shortly before the explosion, leading to belief that a Ukrainian-piloted boat or drone was likely responsible.

He asserted that Russia’s FSB secret service and private military organizations are at odds with the defense ministry and are attempting to damage each other’s credibility in a heated dispute over the failed war.

As a demonstration of his suspicion of the army and defense ministry, Putin had earlier instructed the FSB to oversee security on the bridge.

Is it not evident who caused an explosion? The truck has arrived from the Russian Federation,’ Podolyak tweeted.

A Western diplomatic source suggested that the attack on the bridge may have been ordered from within the Russian government in order to bring about Putin’s ouster.

The insider stated, “It might be the SBU [Ukrainian secret agency], but it could also be the first serious indicator of an attempt from within Russia to incapacitate the Kremlin tsar.”

A major bridge connecting Crimea to the Russian mainland across the Kerch Strait is damaged and on fire after an explosion early Saturday morning.

The 18-kilometer bridge over the Kerch Strait connects Crimea to the Russian mainland and is a crucial artery for Putin’s forces that hold the majority of southern Ukraine’s Kherson area and for the Russian naval port of Sevastopol.

Mykhailo Podolyak, a political adviser to Ukrainian President Volodymyr Zelensky, asserted that the explosion that damaged a crucial bridge connecting Crimea to the Russian mainland was most likely an inside job.

Is it not evident who caused an explosion? The truck has arrived from the Russian Federation,’ Podolyak tweeted.

In his nightly, Telegram-posted video speech, the leader of Ukraine ridiculed the humiliating attack on Vladimir Putin’s supply line.

Today was a pleasant, generally sunny day in our country, according to Zelensky. The majority of the territory was bright and approximately 20 degrees Celsius.

‘Unfortunately, it was cloudy and warm in Crimea, but it was cloudy. But regardless of the weather, Ukrainians know what to do, and our future is bright.

This is the future, devoid of invaders, on all of our territory, but especially in Crimea.

The Kremlin asserted that the bridge, which Putin personally inaugurated in 2018 amid considerable fanfare from Russian official media, was protected by a high security operation.

Russia vehemently asserted that a truck bomb caused the explosion and refused to assign guilt.

Officials identified Samir Yusubov, 25, from Russia’s Krasnodar area as the alleged owner of the red International Prostar vehicle believed to have detonated. They are still investigating the truck’s driver.

Images appear to show movement in the water beneath the bridge a fraction of a second before the explosion that destroyed the road bridge and ignited oil tankers.

Russian law enforcement identified 25-year-old Samir Yusubov from the Krasnodar region as the alleged owner of the red International Prostar vehicle that, according to authorities, exploded on the Crimean Bridge.

Vice-Premier Marat Khusnullin of Russia despatched a team of divers to inspect the bridge underwater.

Now, Russian divers are assessing the damage caused by Saturday’s explosion on the Kerch bridge leading to Crimea.

According to Russian news outlets, Russian Deputy Prime Minister Marat Khusnullin stated that divers would begin their work in the morning, with a more extensive survey above the waterline likely to be completed by the end of the day.

The crew will check the structural integrity of the bridge’s foundations and hunt for additional evidence in relation to the explosion that killed three persons.

Crimea’s Russian governor Sergei Aksyonov assured reporters, “The situation is controllable; it’s unpleasant, but not fatal,” before threatening to respond over the explosion.

‘Of course, emotions have been sparked, and there is a legitimate desire for retribution,’ he said.

It was not yet known if the explosion was a purposeful attack, but the destruction to such a prominent facility coincided with Russia’s military losses and could cast doubt on Kremlin assertions that the conflict is proceeding as planned.

Putin signed a decree on Saturday mandating increased protection for the bridge and the infrastructure bringing electricity and natural gas to Crimea. He also ordered a probe.