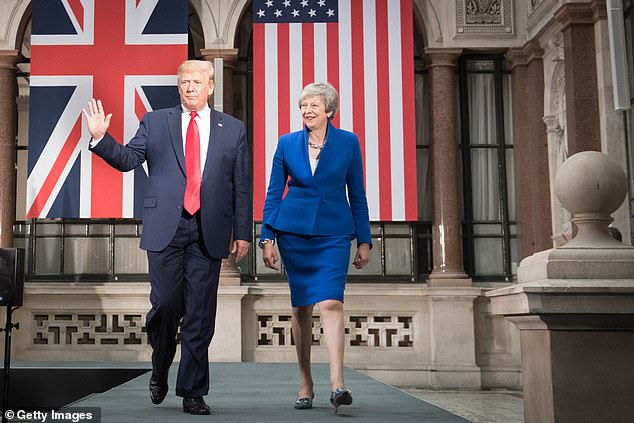 According to a new book, former President Donald Trump brought up the contentious abortion debate at his first meeting with former British Prime Minister Theresa May, bringing up the hypothetical “rape” of a daughter.

The event most likely occurred in 2017, when May visited Washington as the first head of state to meet Trump in an effort to highlight the two nations’ “special relationship.”

According to the new book Confidence Man by Maggie Haberman of the New York Times, at some point Trump, who assumed office after making a number of contentious remarks on the campaign path, said to the British PM: “Other people are pro-life, some people are pro-choice.”

“What if your daughter was raped by some beasts with tattoos and became pregnant?”

As stated in the Washington Post, Trump allegedly asked her.

He continued by mentioning Mike Pence, his vice president, who has long been backed by evangelicals for his conservative views. He described Pence as being “tough” on abortion.

Trump was able to appoint pro-life justices to every position in the federal court while he was president, and the 6-3 majority Supreme Court he managed to appoint invalidated Roe v. Wade this past summer after he left office.

Trump reportedly made the emotional remark despite May openly discussing the anguish of her and her husband Philip May’s infertility later that year.

“It has been really sad.” Simply put, it turned out to be impossible for us, she said on LBC Radio in May 2017.

In 2018, May personally affirmed her support for a woman’s right to a “safe, legal abortion.”

According to the Post, as the meeting went on, “he quickly turned the focus away from Northern Ireland to an offshore wind project he sought to oppose near his home.” That made reference to Trump’s ongoing spat with local government officials over wind turbines that are visible from his golf estate in Scotland.

Following a judicial battle over the matter, Trump was compelled to pay $290,000 to the Scottish government. Additionally, he has long expressed his disapproval of wind farms in public, emphasizing the danger they pose to birds.

»Trump’s first words to Theresa May on abortion«