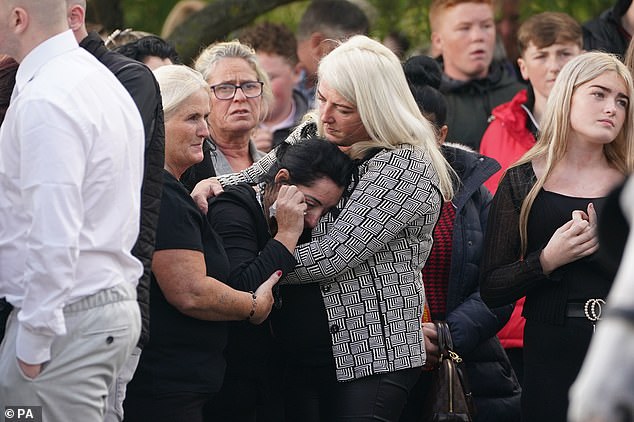 The distraught mother of three Dublin children who were murdered in their own home said that “every day is becoming tougher” following the tragedy.

Three weeks after the three’s burial, during which tens of thousands of members of the community came to pay their respects, the grieving mother, known only as “Twink,” paid an impassioned homage to them in a post on Instagram.

Good night to my three lovely children. “My adorable son, my two beautiful kids,” she wrote.

I miss and love you all more and more every day. forever, Mommy’s three angels.

She previously discussed her loss and the void it left in her heart in a social media post.

“My three beautiful angels. For the rest of my life, I will love and miss you,’ she continued.

“Every day without you is getting harder.” Mommy cherishes you.

On September 9, in a heartfelt ceremony, the three siblings were buried in Dublin’s Bohernabreena Cemetery. The coffins were driven through the streets by horse-drawn carriages as people lined the streets.

Andy Cash, the older brother, 24, is accused of murdering his three younger siblings on September 4 in the wee hours of the morning at their house in Rossfield Avenue, Tallaght.

The following day, Cash showed up in Dublin District Court for a special session under arrest for three counts of murder.

When asked to confirm his identity, he remained silent as he appeared before Cloverhill District Court at 10am on Friday, September 9 via video link from the Midlands Prison in Portlaoise.

On October 6, he is due back in court to receive instructions from the Director of Public Prosecutions.

Cash allegedly stabbed Lisa and the twins, while their 14-year-old brother managed to escape through a window and call for help, the Irish Sun reported.

He was taken to hospital with serious but non-life threatening injuries.

Lisa’s body was found at the bottom of the stairs with apparent stab wounds.

It is believed that older sister Lisa was babysitting at the time they lost their lives.

During the funeral, the congregation heard how twin siblings Chelsea and Christy Cawley were Lisa’s ‘whole life’ and that she was the ‘mammy’ of her friend group.

The friendship group were left devastated by Lisa’s loss and an emotional friend said they did not know how they would go on without her.

She said: ‘I will never forget you. My heart is completely shattered. You were my best friend. You were the mammy of the group. How are we meant to do this without you?

‘You had so many plans for your future. A piece of my heart is completely broken. There were your whole life. You were always there for them and when you weren’t there you were talking about them.’

Fr Paul O’Driscoll, spoke of the community’s heartache and said: ‘Bereft of words, all of us hold the same question, how could this be happening?’

Surviving brother Mikey, 14, who escaped and raised the alarm to the hell that was being raised in the house was praised for his ‘bravery and strength’.