Skip to content
Home » News » Breaking News » The $3.6 million ‘Bridgerton’ Regency manor in the British countryside with a pool and stables 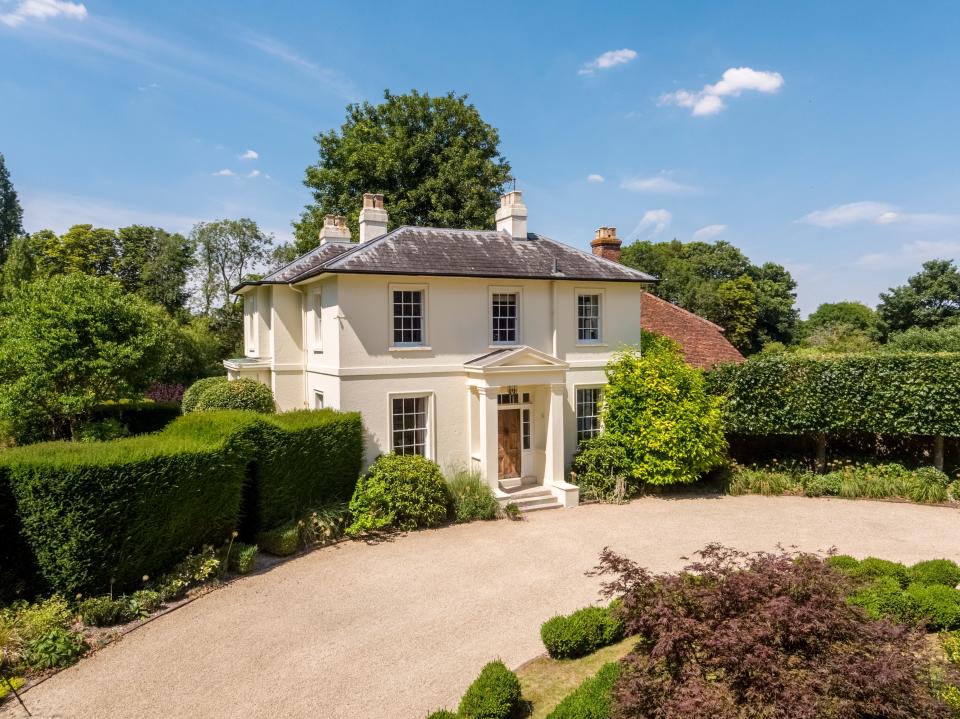 Alscot Lodge, a mansion located in Buckinghamshire, England, is for sale for around $3.6 million, or £3.25 million.

According to Savills’ internet ad, the property in south-east England features four bedrooms, three bathrooms, and four reception spaces on two floors. In addition, there is an outdoor pool and stables.

A spokesman for Savills told Insider that the current owners had decided to downsize “since their children are now settled in their own houses” after 13 years of ownership.

The Regency-style property includes both historical and contemporary characteristics, making it ideal for “Bridgerton” lovers.

John Evans Tarrant, a London attorney, purchased the property and buildings that would become Alscot Lodge between 1829 and 1832, a Savills representative told Insider. They said that the house was finished in 1838 in a style reminiscent of “the elegant Regency villas and buildings” of London, which Tarrant would have known.

According to the ad, the home boasts a mixture of period and modern features, including fireplaces and sash windows with shutters, as well as an expansion with a garden room.

The home is a short train trip from London and offers both country and city lifestyle.

The lake and gardens on the Alscot Lodge grounds.

Alscot Lodge is adjacent to the market town of Princes Risborough, which according to Visit Buckinghamshire is noted for its shops, bars, and weekly street market.

According to the description, the town also boasts a train station with direct connections to London, with frequent trains including a 35-minute service to London Marylebone.

A swimming pool located outside in the grounds of Alscot Lodge.

According to the ad, the heated swimming pool is in a private, walled garden area surrounded by fruit trees, including quince, apple, and medlar.

There are numerous equestrian facilities, so it would be ideal for horse lovers.

The stables on the Alscot Lodge property.

According to the advertising, the property has a timber-built stable yard with four stables and various outbuildings. The representative told Insider that the stables are now vacant.

Alscot Lodge may be defined as a “small estate,” according to a Savills representative who talked with Insider.

A eating terrace located on the grounds of Alscot Lodge.

The premium facilities, including the pool, stables, lake, and gardens, are a “beautiful place to unwind,” according to the spokeswoman.

“It’s a true mini-estate – and very private behind electric gates,” they continued, referring to the gates at the property’s entrance.

The property contains a welcome area with an arched entry and a fireplace.

The foyer at Alscot Lodge.

The present owners of the room have furnished it with a grand piano, a grandfather clock, and a couch.

The living space exudes coziness due to the fireplace and the artworks that adorn the walls.

The living area of Alscot Lodge.

There are numerous huge windows, which flood the room with natural light.

French doors lead out to the backyard from the fully-equipped kitchen.

The kitchen features a breakfast bar, an oven, and built-in cabinetry.

According to the listing, the kitchen opens to the garden and family area, which boasts a panoramic view of the gardens.

Formerly “a lean-to conservatory and messy outbuildings,” the property’s addition was renovated by the present owners in 2010-2011 to add a garden and family room, according to a spokesman.

There are three bathrooms in the home.

A restroom within Alscot Lodge.

Above is a photograph of a bathroom with a bathtub, a shower space, and a window overlooking the gardens.

There are four bedrooms on the property’s first level.

A bedroom at Alscot Lodge.

Each bedroom has been uniquely decorated, and the room pictured above is now furnished with a double bed, curtains, a rug, and a bookcase.

A spokesman stated that the ideal purchase would be a family who enjoys country living and gardening.

Another dining spot in the Alscot Lodge gardens.

A spokeswoman for Savills predicted that a family from London or a family wishing to migrate from a nearby city to the countryside would be interested in the property.

They continued, “It would be great for someone with a passion for gardening and a need for privacy, yet close to amenities and with good connectivity to the capital.”

»The $3.6 million ‘Bridgerton’ Regency manor in the British countryside with a pool and stables«