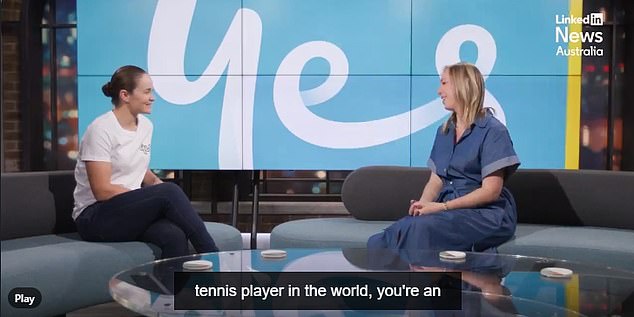 Ash Barty began working at Optus only one month before the personal data of 10 million of the telco’s customers was exposed, and the firm now hopes to leverage her star power to rebuild their image.

Former world No. 1 Barty is the Chief of Inspiration at Optus.

Barty described her position at Optus on LinkedIn as encouraging the next generation, inspiring action, inspiring the workplace, motivating the team, and golf.

Optus said in August that Barty would participate in employee engagement initiatives and community-focused campaigns designed to bring Australians together and inspire them to say “yes” to their ideas, goals, and ambitions.

CEO Kelly Bayer Rosmarin hailed the appointment of Barty to the role.

“Thrilled to announce that Ash Barty has joined us @Optus as our new Chief of Inspiration!

“We are proud to partner with an inspiring Australian who shares our values and wants to encourage others to unlock the power of ‘yes’. Welcome to the Optus family, Ash!”

Barty said at the time that she wanted to assist Australians in becoming “the best version of themselves.”

On the company’s YouTube site, she said, “Inspiration for me has always been my north star, helping inspire Aussies and encouraging them to be the best version of themselves – and I cannot wait to do that with Optus.”

Since her unexpected retirement in March following a Cinderella victory at the Australian Open, Barty has her hands in several pies.

She wed longtime lover Garry Kissick, went down the iconic Fight MND slide in the AFL, performed a shoey at Mick Fanning’s charity golf day, published a number of children’s books, and spent much time on the links.

Barty has said repeatedly that she has no desire to compete at the highest level again, despite the fact that she is plainly talented, as proven by her short Women’s Big Bash League career during her time away from tennis.

She has instead entered the high-flying corporate world.

When talking about her new work at Optus, Barty told the Herald Sun, “whether it’s sport or the corporate world, the most important thing is to find what makes you happy.”

“Sometimes it means that brave or courageous decision, that conscious decision to say yes (Optus’s slogan), and to feel like you are making a difference.”