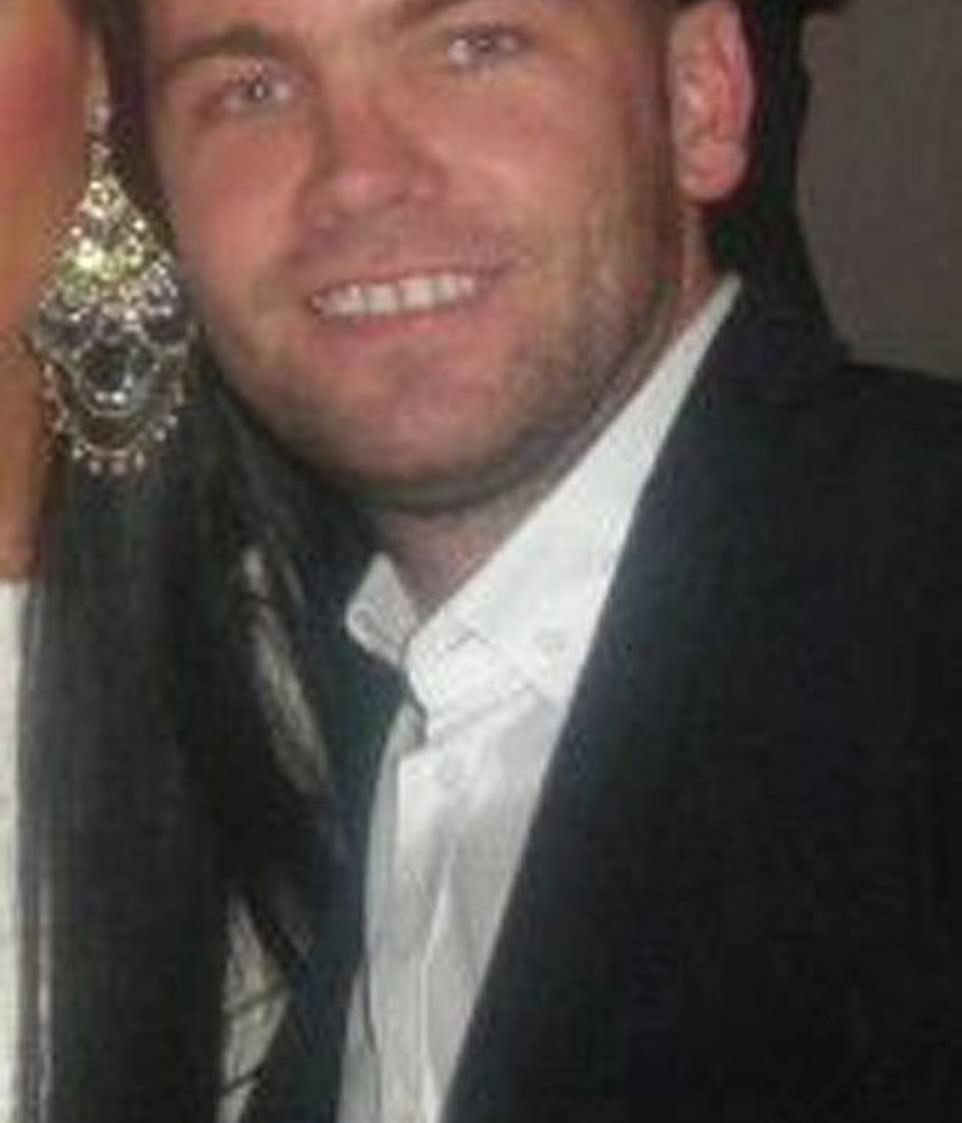 A video shows Steven Gerrard having a good time with the Irish drug gang leader, whose son is apparently dating his daughter.

The cell phone video shows the 42-year-old manager of Aston Villa, a former Liverpool player, talking on a video conversation with a supporter.

Liam Byrne, the boss of a cocaine cartel’s activities in Britain and Ireland, gives the thumbs up as Gerrard kisses the screen in the video.

In the video, Byrne offers to set up a meal for them and Gerrard, and the illustrious midfielder promises to buy him tickets to a Reds game.

Irish police are focusing their attention on Byrne as they look into the alleged operations of the Kinahan cartel and the organization he heads, the Byrne Organized Crime Group, which was designated in the High Court.

There is no evidence that Steven Gerard is a criminal or that he has any knowledge of illegal activity. His agent did not respond to MailOnline on the footage in time for publication.

After Thomas “Bomber” Kavanagh, Kinahan’s brother-in-law, was sentenced to prison in 2019 for possessing a stun gun, Byrne reportedly took over as Kinahan’s right-hand man in Britain.

He left Ireland when the Garda Criminal Assets Bureau confiscated his riches in 2019 for millions of pounds.

Numerous powerful cars, jewelry, bank accounts, and Byrne’s Crumlin mansion in Raleigh Square, which was reportedly equipped with a panic room and Jacuzzi, have also been taken by the CAB.

Following the recent imprisonment of several of the Kinahan cartel’s lieutenants, Gardai are apparently still looking for Byrne and continuing to look into the alleged actions of the most senior members of the organization.

Among those incarcerated is Byrne’s cousin “Fat” Freddie Thompson, who is receiving a life sentence for his role in the 2016 gangland killing of David “Daithi” Douglas in inner Dublin.

According to CAB investigators, Byrne was in the “very top rung” of organized crime in Ireland at the time of their investigations.

The day Lilly-purported Ella’s connection with Lee was made public, the video surfaced.

In a series of photos posted on Instagram, the young couple refueled as Lee’s face was covered by his hat and they were connected to a vitamin drip.

They hired a cartoonist to create a humorous caricature before leaving for the evening to take advantage of the island’s renowned nightlife and flying home in a plush private aircraft.

Lee, the son of Byrne, has no ties to organized crime and previously dated influencer Daisey O’Donnell until their separation earlier this year.

Lilly’s representatives were approached by MailOnline for comment, but they did not respond.

As suspected bagman “Johnny Cash” is detained in Spain, a book titled “Inside the Kinahan Cartel: How Dublin Crooks Built a £1 Billion Global Empire Linked to Murder, Drug-Smuggling, and Gun-Running” is being published.

Christy Kinahan was already well-known to police as a criminal when he started his drug-dealing network in Dublin in the 1990s, but practically no one outside the neighborhood station had ever heard of him.

He currently leads one of the biggest criminal organizations in the world, equal in size to the legendary Los Zetas in Mexico or the Camorra mafia in Italy, according to American authorities. His name is well-known around the globe.

Known as the “Dapper Don,” his Kinahan Cartel, which also includes his sons Daniel and Christy Jr., is estimated to be worth £1 billion. Its network of operations extends from South American cocaine plantations through inner-city areas of Ireland and the UK, via Spain’s Costa del Sol, and to the glittering oasis of the desert that is Dubai.

Over the course of three decades, the Kinahans and their associates, including the infamous Kinahan-Hutch feud, an Estonian hitman known as “The Butcher,” an armorer known as “Mr. Nobody,” and a gangland enforcer simply called “Hatchet,” have been connected to drug trafficking, gunrunning, and murders.

But the net is becoming smaller. Their agent in the UK, Thomas “The Bomber” Kavanagh, was given a 21-year prison term in March for smuggling. The US State Department announced a $5 million reward in April for information on Christy Sr., Christy Jr., or Daniel. And this week, Johnny “Cash” Morrissey, a purported bagman, was detained in Spain.

Here, MailOnline describes the Kinahan Cartel in detail, including who they are, what they are accused of, and how they grew from Dublin’s streets to become one of the largest and most powerful criminal organizations in the world.

Christy Kinahan chose a life of crime; he wasn’t destined for it. He was intelligent, interesting, and had alternatives since he was raised in a middle-class household and attended one of Ireland’s top schools. He decided to get into crime.

His criminal history dates back to the 1970s, when authorities first became aware of him for burglary, theft, forgery, and other property offenses. He didn’t start engaging in the drug distribution industry that would make him famous until the late 1990s.

With an old friend named Thomas Kavanagh, Kinahan first operated a trading ring in central Dublin, but he had larger aspirations. He was imprisoned for narcotics offenses in the late 1990s and utilized his time there to become proficient in Spanish and Dutch, which he used after his release to expand his line of work internationally.

According to US State Department officials, he built his “company” into an empire by importing from South America and trading in heroin and cocaine into Ireland, the UK, and Europe.

The business was indoctrinated into Christy Jr.’s sons Daniel and Christy Jr., with Daniel being accused by Dublin High Court in 2018 of managing the majority of day-to-day operations, which by that point included dealing in both drugs and weapons across “Europe, Asia, the Middle East, and South America.” Apparently, Christy Jr. manages the accounts.

Daniel, who denies having any connection to organized crime, is also a boxing promoter and has backed fighters like Tyson Fury.

He was said to have had a key role in organizing a fight between Tyson Fury and Anthony Joshua that was scheduled for last year but never materialized.

Apart from a run-in between one of Christy Srassociates .’s and the Irish National Liberation Army, the gang operated with nearly impunity as the Irish Gardai struggled to track their international operations. Christy Sr. had run-ins with the law over the years and served time in prison in Belgium and the Netherlands.

All of that changed, however, when Gary Hutch, a member of the rival Hutch Gang and the leader’s nephew, was fatally murdered at his house on Spain’s Costa Del Sol in September 2015.

Gary and Daniel Kinahan reportedly collaborated until their disagreement over a plan involving the capture of tigers. There were also unfounded rumors going around that Gary was an informant for the Spanish government. One of Gerry’s associates apparently accepted to be shot in the leg as a “payment in blood” for the alleged betrayal after money was exchanged.

But in the end, none of it mattered, as James Quinn, a hitman who has now been found guilty of murder, shot and killed Gary after he allegedly begged for his life.

That triggered the Hutch-Kinahan Feud, a vicious and murderous gang battle that resulted in at least 18 deaths over the next three years, the most of them by gunfire. Most of the Hutch Gang were six feet under by the time it was through. In two other instances of mistaken identification, innocent bystanders died.

The conflict reached its peak in February 2016, when Liam Byrne, one of the gang’s senior members and a Kinahan associate, was slain in an attempted attempt on Daniel Kinahan’s life.

In his capacity as a promoter, Daniel was present at the weigh-in for the boxing battle between Jamie Kavanagh and Portuguese boxer Antonio Joo Bento, whose father, Gerard “Hatchet” Kavanagh, was an enforcer for the gang.

Six Hutch Gang assassins carried out a raid while people connected to the incident lingered about in the foyer of the Regency Hotel in Dublin. A getaway driver waited outside the hotel as two other men, one of whom was disguised as a lady, stood watch with pistols at the entrance. Guardai riot gear-clad three guys barged in the entrance.

The three opened fire in the foyer with AK-47 rifles, killing Byrne. Daniel managed to flee and subsequently stated that he had seen the weapons being dragged 20 feet away and just avoided being shot at.

Due to the South American link, the UK’s National Crime Agency, the EU’s Agency for Law Enforcement Cooperation, and the US State Department were all enlisted in the authorities’ increased attempts to apprehend the gang.

They dealt the gang their first significant blow when Thomas Kavanagh and two accomplices, Gary Vickery and Daniel Canning, were sentenced on charges of possessing firearms, trafficking in controlled substances, and money laundering in March.

Kavanagh received a 21-year sentence for concealing cocaine and marijuana worth £30 million in industrial machinery. In addition to finding large sums of cash and weapons, police in Tamworth, close to Birmingham, stormed the man’s bulletproof home. The UK branch of activities came to an end as a result of his conviction.

The US State Department imposed sanctions on seven other gang members the following month, the majority of whom are now headquartered in Dubai, and offered a $5 million reward for information leading to the capture of Christy Sr., Daniel, and Christy Jr.

While the gang leaders may have eluded the authorities in the past, Garda Commissioner Drew Harris predicted at the time that they would soon run out of money and would be unable to continue hiding.

The second blow was delivered earlier this week when Johnny “Cash” Morrissey, who is suspected of running the group’s money-laundering activities, was detained in Spain.

After a search on his residence, Morrissey, a former doorman for Rochdale with an Irish passport, was taken into custody while sitting topless. The raid, according to Spanish police, destroyed the gang’s activities there, and they blame Morrissey for assisting in the daily laundering of almost £300,000.

Spanish investigators said that money had been transferred utilizing the antiquated Hawala method across the globe rather than being physically transported out of Spain.

It is known that criminal gangs have adopted the informal technique of transferring money, which derives from an Arabic phrase for transfer or trust and involves a network of brokers. These groups utilize code numbers or tokens, such as torn-in-half banknotes, to demonstrate that money is due.

Detectives said that the discovery of 200 kilos of cocaine and 500,000 Euros (£430,000) in cash at the beginning of last year, stashed in cars with “advanced concealment systems,” served as the catalyst for the Spanish police probe.

Along with Morrissey, Spanish police also detained one of his associates and his wife, Nicola, who was subsequently freed. In the UK, a third guy was detained.

In addition to Britain, over a dozen searches of homes and businesses were conducted in Spain, including two locations in Glasgow and one in Heywood in Rochdale, Greater Manchester.

Johnny Morrissey, real name John Francis Morrissey, was one of seven individuals the US Department of the Treasury’s Office of Foreign Assets Control designated for sanctions in April (OFAC).

According to the US authorities, John Morrissey has worked for the Kinahan Organized Crime Group (KOCG) for a number of years, including as an enforcer, and facilitates international drug shipments for the organization from South America. Morrissey is so close to alleged cartel boss Daniel Kinahan that he was invited to his wedding in Dubai in the summer of 2017. Money laundering is also a concern for John Morrissey.

»Steven Gerrard was seen partying with a gang boss«