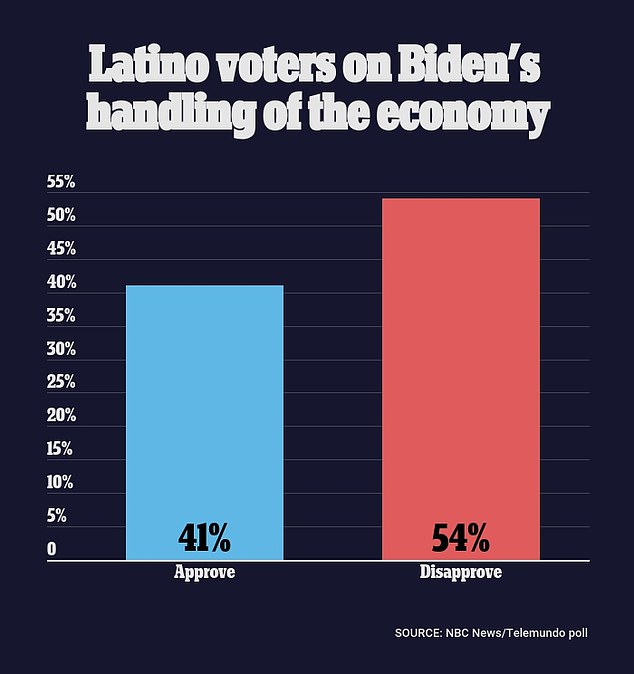 A recent Sunday survey found that the majority of Latino voters are unhappy with how President Joe Biden is managing the economic and border security concerns.

More than 50% of Latino voters polled by NBC News/Telemundo awarded Vice President Biden unsatisfactory grades on the economy, “border security and immigration,” and “the cost of living,” despite the fact that they usually approved of the president over all.

With fewer than six weeks before the November midterm elections, the survey also revealed that Democrats’ margin over Republicans among Hispanic and Latino communities had plummeted to the lowest it has ever been.

On November 8, voters around the nation will cast ballots to choose which party will govern Congress for the remaining two years of Biden’s tenure.

Democrats are supported by 54% of US voters surveyed by NBC News/Telemundo, while the GOP is supported by 33% of respondents, a 21-point advantage.

That’s five points less than the left’s advantage in 2020, and it’s decreased by half since Democrats had a 42-point edge in that year.

It is important to remember that the Latino and Hispanic voting bloc is among the most politically varied in the nation and is by no means a homogeneous group.

The data contribute to a generally grimmer image for Biden’s party, which now maintains narrow majorities in the House of Representatives and the Senate.

Republicans also significantly outperform Democrats in Sunday’s survey on subjects that seem to be on the minds of most voters as the November elections approach.

Latino voters have greater faith in them to manage the economy, border security, and crime, despite the fact that neither party has reached the required 40 percent of the vote.

But when it comes to abortion, “address[ing] the issues of the Hispanic population,” and “preserving democracy,” Democrats are much preferred.

The perceived faults of the president are comparable to those of his party; according to a study of Latino voters, the economy is being handled poorly by the president, with a disapproval rating of 54%, and the expense of living under Vice President Biden, of 60%.

On immigration and the border, he received an unfavorable response from 51% of respondents.

For the fiscal year ending last month, there were a record-breaking two million or more interactions with migrants on the southwest border.

‘Failing communist governments in Venezuela, Nicaragua, and Cuba are fueling a new wave of migration throughout the Western Hemisphere, including the recent spike in contacts at the southwest U.S. border,’ Customs and Border Protection (CBP) commissioner Chris Magnus said at the time.

Meanwhile, government representatives in border states like Texas and Arizona have been pressuring the Biden administration to do more to help local and state governments that are ill-prepared to handle the population boom alone.

Even one of Biden’s fellow Democrats called him out as a result of it.

Rep. Henry Cuellar, who represents a portion of Texas’ border with Mexico, said last week on Fox News that Biden was disregarding his pleas for him to take further border security measures.

When questioned whether he warned the president in late September, Cuellar said, “I have tried, I have tried and I have tried.”

“I’ve been saying for years that we need to make sure we act morally at the border.”

Cuellar said, “No, they’re not,” when asked whether the Biden administration was responding to his calls.

The survey on Sunday was conducted from September 17 to September 26 with a sample of 1,000 registered voters.

»Biden’s border security and economy are unpopular among Latinos«