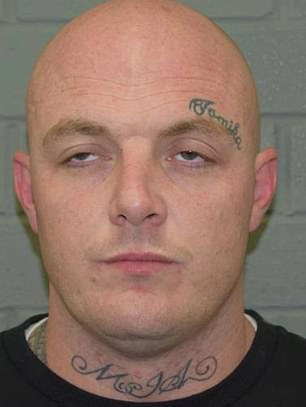 Four firearms, including a rifle with a pirate motif, were discovered in the man’s truck. He is notorious for having a tattoo of his ex-name lover on his face.

Dylan Cain Aspinall, 34, was detained in North Adelaide’s back alleys in a black Holden Commodore that had stolen license plates in May of last year.

Aspinall gained notoriety on social media in 2017 when South Australian police released a photo of him with a tattoo bearing the name of his then-girlfriend.

Above his left eyebrow, he had the name “Tamika” tattooed, but the Advertiser stated that he now seems to be seeing someone else.

On May 28, 2021, South Australian police were tailing Aspinall in his most recent run-in with the law.

Before being swiftly apprehended, he escaped on foot after leaving the automobile.

When police searched the vehicle, they discovered a sawn-off over/under shotgun, a sawn-off, and a loaded.22 Ruger handgun in the driver’s door.

One of the weapons has an inscribed skull-and-crossbones design and resembles a pirate’s gun.

It is scribbled on the weapon, “It’s a pirate’s life for me.”

Aspinall entered a guilty plea to one count of ammunition possession and four counts of having a handgun.

He was expected to present sentencing arguments in District Court on Monday, but the court was informed that a psychiatric evaluation was not yet prepared.

The proceedings were postponed until next month by Judge Paul Muscat.

His tattooed mugshot was released by South Australian police in 2017 as a result of a parole board warrant for his arrest.

He was described as being bald, 175 cm tall, weighing 80 kg, and having blue eyes.

Police warned the public not to approach him after seeing his unusual tattoo over his left forehead and another one on his neck.

Social media users were drawn to the photo and said that Aspinall would not be too difficult to spot because of his distinctive tattoos.

One commenter at the time said, “Keep running circles around them brother aha hbd for 2morro bro.”

A month later, he was taken into custody by the police.