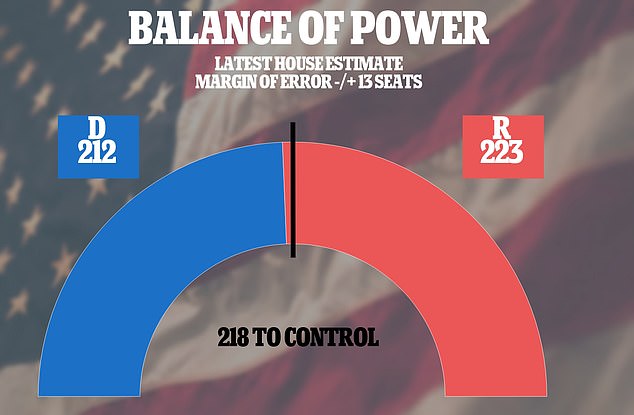 With little over a month before voters go to the polls, the Republican slaughter anticipated in the 2022 midterm elections has diminished to a projected 11-seat advantage in the House.

The expected result of the midterm elections in November has changed due to shifting political environments, including immigrants being transferred to Democratic areas and new laws resulting from the Roe v. Wade decision.

Republicans are projected by a CBS News model to win the race with a narrow margin of 223-212. Republicans lost seats for the second consecutive month; they had 226 in August and 230 in July.

The model has a plus or minus 13 seat margin of error.

It is less probable that the 50-50 split in the Senate would change to a GOP majority in the next election, which is just 42 days away.

Uncertainty surrounds the outcome of the election in a year without a presidential contest, but if Biden’s consistently low popularity rating is any indication, things don’t look good for the Democratic Party.

Biden’s approval rating is now in the low 40s, which is still above its mid- to high-30s July low.

On the Republican governors’ push to fly and bus migrants from southern border states to sanctuary cities and Democratic regions like Washington, D.C., New York City, Chicago, and Martha’s Vineyard, voters are divided.

Even if there is a 51 percent approval to 49 percent disapproval ratio overall, the differences are substantially wider when analyzed by political party.

The busing and flying of migrants to liberal regions is supported by an astounding 87 percent of Republicans, while just 80 percent of registered Democratic voters agree with this so-called “political spectacle.”

Ron DeSantis, the governor of Florida, ordered a private jet carrying 50 migrants to the affluent island of Martha’s Vineyard off the coast of Massachusetts earlier this month, which brought the problem to a climax. He was the target of a class action lawsuit alleging that he tricked the migrants into boarding the plane.

Two-thirds of the 2,253 registered voters polled for the CBS News/YouGov Battleground Tracker feel that their rights and freedoms are seriously threatened by the midterm election, and both Republicans and Democrats believe that their freedoms would be reduced if the other party won control of Congress.

In terms of who they will vote for on November 8, 59% of prospective voters feel that abortion is extremely significant.

According to the study, those who rank abortion as a major priority are almost twice as likely to support Democrats as Republicans.

Democrats and pro-abortion advocates were horrified when Republican Senator Lindsey Graham announced legislation earlier this month that would outlaw abortion statewide after 15 weeks of pregnancy.

On Tuesday, the Senate will reconvene and vote on a continuing resolution to finance the government through Friday and prevent a shutdown. The House and Senate are not in session on Monday.

After the Supreme Court’s June decision to overturn Roe v. Wade cast doubt on the future of this right, Democrats also want to codify homosexual marriage before the November elections.