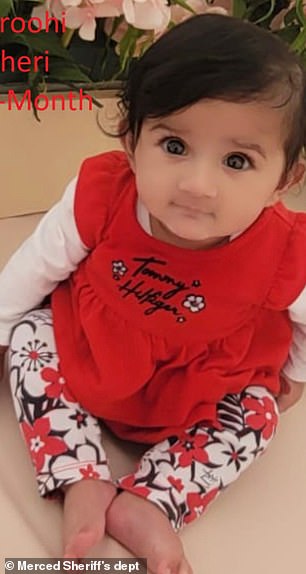 In California, a Punjabi family that included an eight-month-old infant girl was abducted.

Along with the baby’s uncle Amandeep Singh, Jasleen Kaur, 27, her husband Jasdeep Singh, and their eight-month-old daughter Aroohi Dheri were abducted.

Police have not said whose company they were stolen from or if the family owned it, just that they were seized from “a business” in Merced, California.

Additionally, they haven’t said how many suspects they think were involved in capturing the three people and child.

One light-skinned suspect wearing a ski mask was seen on surveillance film, and police claim that he is currently attempting to “hide his traces.”

The man’s motivation is a mystery to the police.

“We have a scumbag out there who abducted an eight-month-old infant, her parents, her father, and her uncle.”

“We don’t know why the abduction occurred; there is no apparent motive.”

Vern Warnke, sheriff of Merced County, stated during a news conference yesterday, “We simply know that they are gone.”

Police have not yet disclosed the family’s whereabouts or if the abduction was captured on camera.

Calling 209-385-7445 can connect you with the authorities if you have any information.

»Punjabi family in California is kidnapped«