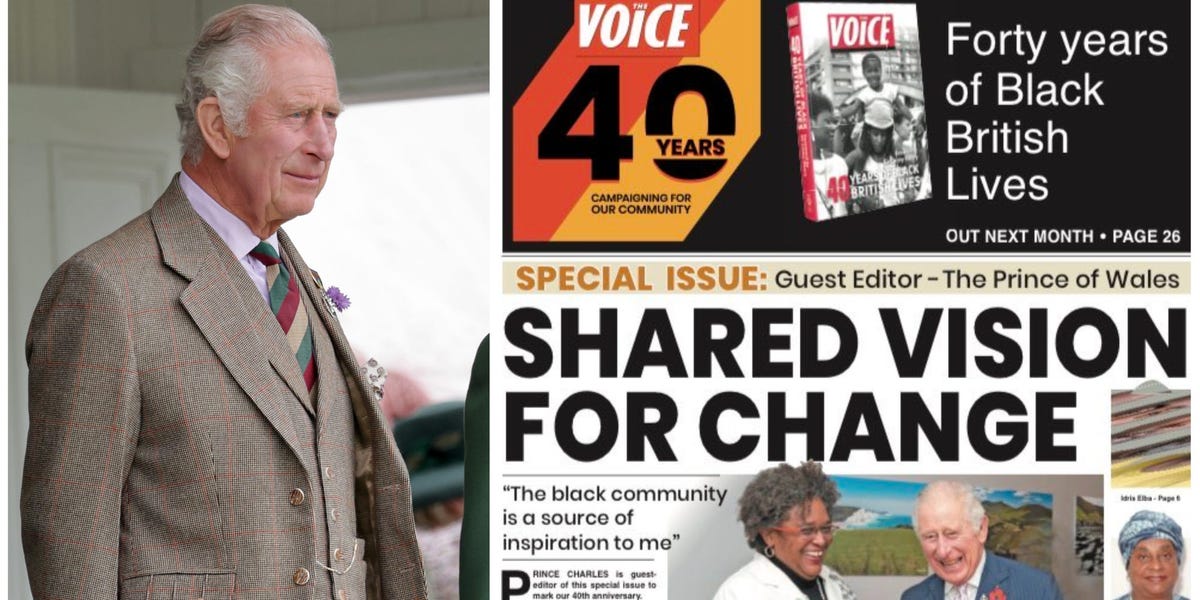 Prince Charles editing the September edition of The Voice, the sole Black newspaper in Britain, drew controversy. The Voice has confirmed this.

The newspaper’s 40th anniversary edition, “Shared Vision For Change,” which contained interviews with Doreen Lawrence and Idris Elba, was guest edited by the 73-year-old heir to the British throne. According to its Twitter profile, The Voice is the only Black national daily published in Britain.

When Paulette Simpson, the newspaper’s executive editor, appeared on ITV’s “Good Morning Britain” on September 1, she admitted that the relationship between the newspaper and Charles had first drawn mixed reactions.

Presenter Kate Garraway said on the programme that “there will be those who argue he’s not the greatest guy, not least because he’s not Black and he’s not from the community The Voice has battled for so long, for 40 years.”

“We need all voices present at the table in order to enable change. We believed that he ran for office on causes that we support because of the nature of what he has been doing for more than 40 years “In response, Simpson.

Therefore, she said, “it’s crucial that everyone, not just the ones who are impacted, be at the table when you’re pushing for change in society.

The publication has now released a formal statement addressing both the criticism and the royal family’s participation in the slave trade.

The Voice issued a statement to the Mail Online that said, “We realise the strong sentiments some of our readers have about this edition and the difference of opinions in the community.” “We decided to engage with The Prince of Wales after considering the work he has done on racial equality over the course of 40 years and the similarities with our advocacy over that time.”

The statement said, “The edition we released deals with significant themes like reparations and black empowerment, recounted through the perspective of prominent and respected persons in the community.

“Apologies and restitution for the slavery of Africans remain a major demand from all institutions that were engaged in it or benefited from it,” the statement stated.

Furthermore, according to Lester Holloway, editor of the newspaper, who spoke to BBC London, “all of the institutions, including the royal family, that have been involved in the historical horrors of colonialism have not apologised for slavery and what we’ve got is statements of personal regret which is absolutely not good enough,” according to the Mail Online.

In the 1500s, Queen Elizabeth I was involved in the slave trade in Britain. According to NPR, the king openly backed Captain John Hawkins, who in 1562 abducted 300 Africans and traded them for skins, ginger, and sugar.

Charles has talked about the palace’s support of the slave trade several times, although Queen Elizabeth II has never made a formal apology.

Charles acknowledged the “appalling atrocity of the slave trade, and the unimaginable suffering it caused,” according to a report in the Guardian in 2018. A source told The Sunday Times in June of this year that the prince wanted the slave trade to be taught in schools with the same respect as the Holocaust.

Insider’s request for comment was not immediately answered by Clarence House or The Voice personnel.

»Prince Charles guest-edited Britain’s only Black newspaper, which demands an apology for slavery«