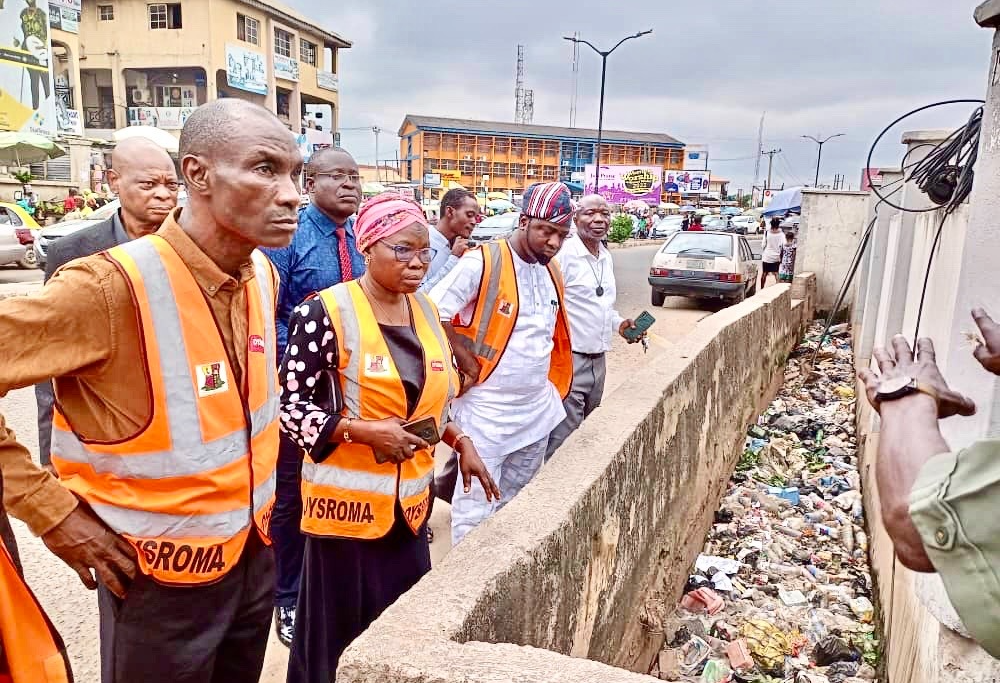 Together with the Ministry of Works and Transport and the Ibadan North-West Local Government, the Oyo State Road Maintenance Agency (OYSROMA) has started working in synergy to address the issue of drainage blockage in the Ibadan city, particularly in Dugbe, Post Office road.

The Chairman of OYSROMA, the Honorable Busoye Soladoye, revealed this on Monday evening while inspecting blocked drainage lines in Dugbe, Ibadan.

All the parties involved in the inspection, including those from the concerned local government and the State Ministry of Works and Transport, he claimed, were prepared to collaborate in order to resolve the issue of blocked drainages on the Dugbe road axis along the Bank and Post Office road.

In the presence of the Agency’s management staff, the Chairman, OYSROMA, dwelt on the importance of preserving a healthy environment and keeping roads durable.

He said that actions that would impair the smooth operation of the State roadways would not be tolerated by the Governor Seyi Makinde administration.

While urging the people of Oyo State to keep debris out of the drains to allow free flow of water, Hon. Soladoye maintained that the blockage of drainage was caused by the dumping of rubbish on water outlets, which led to spillover on the roads and inconveniences for motorists and traders.

“It is high time we told ourselves the home truth, dumping of refuse in the drainage system is the major cause of damage to our roads, if Government expends so much money on construction of roads and we dump refuse on the line drainage, it will fill up and spill contents on the road, which will lead to weakening of the roads and their eventual damage.

“We are happy that we now have a synergy among us the OYSROMA, Ministry of Works and the concerned Local Government authority to put an end to this problem and we will replicate same across the State.”

The Special Adviser for Infrastructure to the Governor, Mr. Seye Adeleye, in his words during the inspection, said what brought all the stakeholders together was the report of flooding which came from the people of Oyo State about the stretch of road at Dugbe, along the post office and bank road.

He said that all the relevant agencies concerned were present to see what caused the blockage and would, from the assessment, make provisions to do the corrections as required.

“Most of the issues are bothering on dumping of refuse, so we will also need to contact the sister Ministry, Ministry of Environment to see how we can have a long time solutions to some of the issues we are facing on the road which is mostly from debris and distilling causing block drainage and flooding of the roads.”

The Oyo State Library Board’s Dugbe office was blocked from the main road, according to the Permanent Secretary of the Ministry of Works and Transport, Mr. Fatai. This spillover of drainage content led to the road’s deterioration, especially during the rainy season.

He declared that the KOPEK construction business and representatives of the Ibadan North-West Local Government would accompany them as they assessed the condition and proposed a long-term fix.