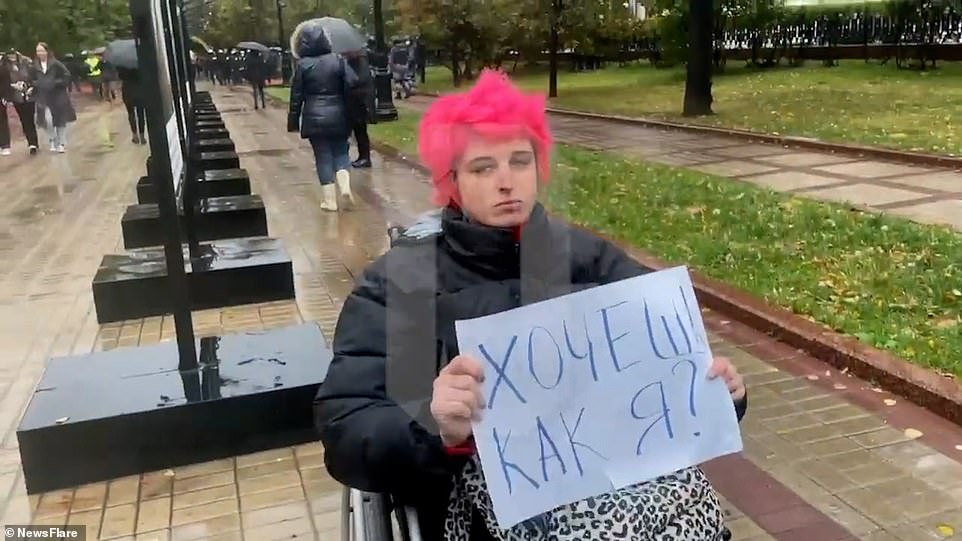 On a day when more than 700 anti-mobilization demonstrators were detained, a courageous one-legged lady in a wheelchair who was humiliating soldiers heading to join Vladimir Putin’s army was swarmed by Russian riot police.

A striking illustration of anti-mobilization showed a lady carrying a sign that said, “Do you want to be like me?” up to Putin’s troops as she apparently participated in a nonviolent demonstration in Moscow’s Chistyye Prudy neighbourhood.

When Russian riot police approached the courageous lady in their ranks in an effort to crush opposition to Putin’s government, it was caught on camera.

Before the riot police came, photographers surrounded the brave lady with the bright pink hair, who then unzipped her purse and pulled the shameful sign up.

The sign that looked to have been taken off the lady when cameras surrounded her was subsequently spotted being held by one Russian cop.

Just three days after Putin reportedly authorised Russia’s first military conscription since World War Two for the situation in Ukraine, a rights organisation stated that 730 protesters were arrested throughout Russia during today’s demonstrations against the mobilisation order.

According to the independent OVD-info protest monitoring organisation, detentions have taken place in 32 different places, ranging from St. Petersburg to Siberia.

Despite the fact that unofficial demonstrations are prohibited by Russian legislation, which also outlaws any action that is thought to disparage the armed services, protests broke out around downtown Moscow.

It happens after images emerge of Russian couples being forced to say their goodbyes as thousands of inmates and army reservists are sent to Ukraine.

After Putin’s failed invasion of the neighbouring nation, 300,000 men have been partially mobilised, including convicts and even efforts to enlist the dead.

Following the Kremlin leader’s announcement of the army increase, protests broke out in major cities, and lines have formed at the country’s borders as young men try to leave.

Although Putin’s well-trained internal security forces promptly put an end to the original protests, additional demonstrations have started this afternoon in Moscow.

On their route to basic training, soldiers have reportedly been seen fighting and drinking.

Yesterday, Charles Michel, the president of the European Council, urged EU nations to provide sanctuary to Russian conscientious objectors who were fleeing the conscription.

He said that the EU should be accessible to “people who don’t want to be used by the Kremlin.”

“We must take this into account,” he said Politico, “if individuals in Russia are in danger because of their political ideas, because they do not support this insane Kremlin decision to start this war in Ukraine.”

“A reluctance to fulfil one’s civic duty in Russia or a desire to do so does not constitute adequate grounds for being given refuge in another country,” Estonian Foreign Minister Urmas Reinsalu had said.

It happened at a time when the military was visiting Ukrainians in Russian-controlled regions of the Ukraine and ordering them to cast ballots in so-called referendums that were roundly denounced by foreign observers.

According to one “ridiculous” survey, Donetsk and Luhansk residents support joining Russia by 97%.

Additionally, polling places have been created all around Russia, presumably to let displaced Ukrainians cast their ballots.

In actuality, however, they provide greater chances for vote-rigging.

The British ambassador to Ukraine, Melinda Simmons, said that the election results had “already been determined” and that the “fake” referendums were a “media exercise aimed to drive further an unlawful invasion by Russia.”

Despite this, the votes are a major milestone in the conflict since Putin will be able to declare that any Ukrainian efforts to retake those territories constitute an attack on Russia.

This broadens the range of tools at his disposal to ‘protect’ his region, maybe even involving nuclear weapons.

Additionally, it would give Putin the opportunity to turn his “special military operation” into a full-fledged conflict, enhancing his ability to enlist personnel and punish any who attempt to leave.