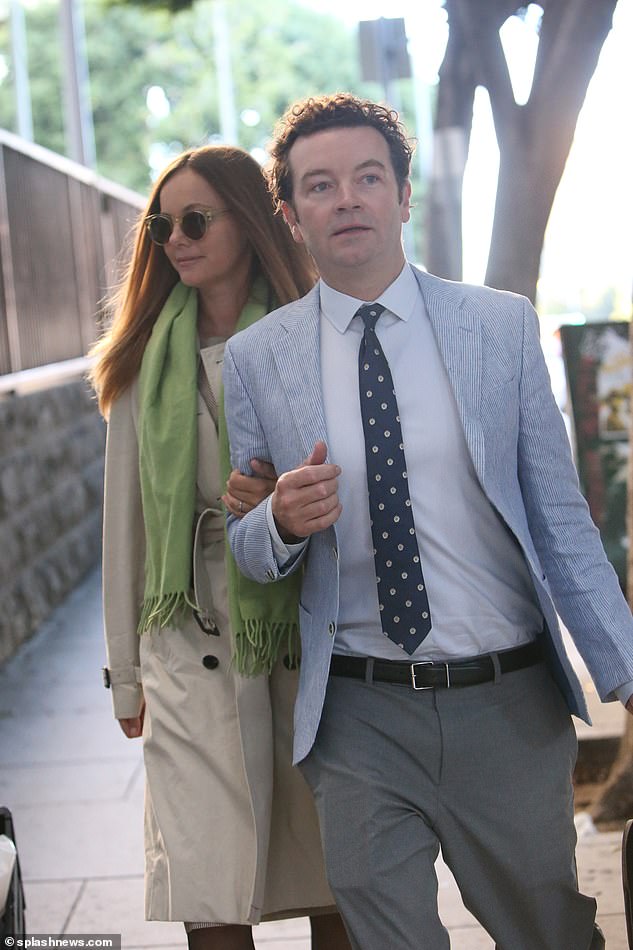 Tuesday, one of Danny Masterson’s three victims testified at his trial that the Scientologist actor sexually assaulted her while she was asleep and then laughed when she confronted him about it.

And when Jane Doe No. 3 reported him to the Church of Scientology, she was informed, “There was something I did to deserve what he (Masterson) was doing to me.”

Jane Doe #3, who at one point grew so distraught that the judge had to request a 10-minute recess, told the court that in December 2001, she and Masterson dined at the Los Angeles café La Poubelle, where she drank “a glass or two of wine.”

She claimed, “I remember getting up to leave, but I have no memory beyond that.”

She told the jury that the next thing she remembered was waking up naked in bed at Masterson’s house, where she resided.

She walked downstairs in search of Masterson and found him seated in his office, where she inquired, “What occurred last night?” I asked him if I had fallen because “down there” hurt.

He chuckled and claimed he had sexual relations with me there.

I asked him whether I had been unconscious the entire time, and he responded affirmatively.

As she wept in the witness box, Jane Doe No. 3 continued, “It broke my heart.” Because I had complete faith in him and did not believe he would go that far.

Masterson, 46, is accused of raping three women between 2001 and 2003 at his residence in the Hollywood Hills. He has entered not guilty pleas to all allegations.

If convicted at the conclusion of his trial, where ex-scientologist Lisa Marie Presley, the daughter of Elvis Presley, is listed as a witness, he faces a prison term of 45 years to life.

The That ’70s Show actor, who has been free on $3.3 million bond since his arrest in June 2020, wore a dark blue suit with a gray shirt and tie on the sixth day of his rape trial in downtown Los Angeles on Tuesday.

His accusers, who DailyMail.com identifies only as Jane Does 1 through 3, are all former Scientologists and are also suing the star of That ’70s Show and the Church of Scientology in civil court, alleging that they have been harassed and intimidated since reporting him to police.

Jane Doe #3 explained to Deputy District Attorney Reinhold Mueller that she did not report Masterson to the police because, as a Scientologist, she believed at the time that “the sole justice system was Scientology.”

Therefore, she went to the Scientology Celebrity Center in Hollywood a day or two after the alleged rape to meet her “ethical officer” to report it.

According to the woman, the ethics officer stopped her and instructed her not to use the word “rape.” “She emphasized to me that a person in a relationship cannot commit rape.

I believed her because she was the ethics officer and I had faith in her. She told me that my actions were to blame. I had done something to deserve what Masterson was doing to me.’

The court heard that a Scientology chaplain informed her that “my job as Masterson’s girlfriend was that if I didn’t say no, it wouldn’t happen.”

“As his lover, it was my duty to offer him sex anytime he desired.” He supplied for me, so I had to do the same.

She told the court that on the advice of her ethics officer, she completed a month-long “ethics course” out of fear of being labeled a “suppressive person” and cut off by other Scientologists.

“It scared me, so I did what I was told,” she said, adding that if she had been labeled a “suppressive person” at the time, “I’m afraid I would not have survived.”

In February/March 2002, Jane Doe #3 and Masterson ended their relationship and went together to Scientology officials to sign the “terms of their breakup.”

When asked about these terms, she responded, “I recall that I was not to sue him.”

They remained in contact after their breakup, and she admitted that they were intimate again, three times in Los Angeles and once in New York, where she moved about a year later.

Why did she continue to have sexual encounters with Masterson after their breakup? She was queried.

‘I loved him, ‘ she responded. ‘I care about him very much.’

The testimony came on the second day Jane Doe #3 was on the stand. On Monday she told the court that the actor would urinate on her, call her ‘white trash,’ be physically abusive toward her and regularly force her to have sex against her will.

Last week Jane Doe #1 described how Masterson allegedly threw her in his jacuzzi, raped her and then pulled a gun on her, telling her, ‘Don’t say a f***king word.’

Jane Doe #3 was a successful model, barely 18, when she met Masterson in 1996 and soon moved in with him, the court heard.

‘It was good for the first year – he was very charming and I fell for him,’ she said.

The Scientologist TV star grew tired of her traveling around the world on modeling assignments and asked her to stay at home. ‘His faith discusses this — women should stay home,’ she told the court.

He also suggested her join the Church of Scientology, she added. ‘He made it very clear to me that I must become a Scientologist. To maintain this relationship, I was required to enroll in [Scientology] classes.

‘I was informed that my parents were oppressive, so I severed ties with my family. He [Masterson] did not like any of my pals, so I made Scientologists my new friends.

My entire life consisted of his friends, family, and church.

Jane Doe #3 told the jury that Masterson altered approximately one year into their relationship.

“He became quite sexually aggressive, and I recall physical and emotional assault.”

“When I returned from Paris, I was quite exhausted and jet-lagged, and he wanted to have sexual relations with me, but I refused.

It resulted in a brawl, and he dragged me across the bedroom floor by my hair. He called me fat and other derogatory terms.

She told the court that Masterson’s requests for sex when she wasn’t interested got more regular. It became rather routine, and I simply allowed it to occur.

Jane Doe #3 stated that she, and not he, would apologize on these occasions.

If I did not apologize to him, he would be really angry. He refused to speak with me. I believed that it was my fault. He was never wrong…

He would desire sex, I would tell him no, and he would still have sex. You simply cannot say no to him.’

She told the jury that Masterson would refer to her as “white trash” when he was furious with her.

As his girlfriend, it was my responsibility to offer him sex anytime he desired. After Jane Doe No. 3 reported the alleged ‘rape,’ I was required to match that Scientology chaplain’s counsel to Jane Doe No. 3’s.

Additionally, she claimed he would urinate on her. While I was in the shower, he would sneak in and urinate on me. He found it to be amusing.

Jane Doe #3 stated that her relationship with Masterson shifted and was on the verge of dissolving in late 2001, when she “began sort of standing up for herself.”

She fought back tears as she recalled a night in November 2001 when she had a sexual encounter with him while she was sleeping. I refused to have sex with him, saying, “No, I don’t want to…

But he refused to stop. I attempted to push him away, but he placed his entire body weight on me. He pushed my arms back, leaving me feeling trapped.

“I was able to free my left hand and do something I knew would free me from his grasp.” I yanked on his hair. He has two rules: no touching the face and no touching the hair.

Asked by Deputy DA Mueller how Masterson reacted when she pulled his hair, she said, ‘He hit me hard on the face with his hand.

‘When he hit me I was shocked by it. I was angry. I was screaming, ‘Get off me.’

‘At that point he got up, stood over me and spit on me. He referred to me as “white trash.”