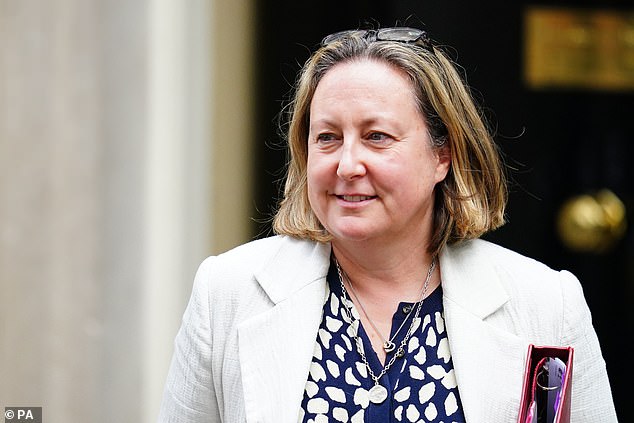 Following discussions with the new transportation secretary, the RMT union says it made a “good start” in resolving the issues that led to train strikes.

Mick Lynch, the head of the union, claimed he had a “nice discussion” with Anne-Marie Trevelyan, during which he outlined “all that is wrong with our transportation system.”

The gathering follows the announcement by RMT union leaders that 40,000 National Rail and 15 train operator employees will strike on October 8.

The RMT stated last week that the planned walkout will “essentially shut down the railway network” as tens of thousands of railway workers will take to the picket lines.

Following discussions with the new transportation secretary, the RMT union president Mick Lynch (seen in August) stated that the group had made a “good start” in resolving the issues that led to rail strikes.

Mr. Lynch and Mick Whelan of Aslef spoke with Ms. Trevelyan just days after she took her new position as transportation secretary last week. They gathered to discuss the industry’s persisting problems.

It was a very enjoyable gathering. Mr. Lynch told BBC, ‘She allowed me to download into her, in effect, everything that is wrong with our transportation system and railways in particular.

“That’s a wonderful start, but we need to see tangible change… allowing corporations to deal freely on a basis of free collective bargaining.”

He claimed to be’more positive’ that change will be achieved under Ms Trevelyan’s leadership than he was under former transport secretary Grant Shapps, who allegedly refused to meet with union leaders.

“I am more optimistic than I was under Grant Shapps, but anyone would be,” he said, adding that “face-to-face communication is preferable to being locked out of the room.”

Mr. Lynch stated that he had a “nice discussion” with new transport secretary Anne-Marie Trevelyan (seen in September) during which he outlined “everything that is wrong with our transportation system.”

As part of a continuing conflict over wages, jobs, and working conditions, three rail strikes are scheduled for next month.

The Department of Transport has urged union leaders to reconsider this divisive action and instead negotiate a fresh course of action with their employers, rather than against them.

In his ’emergency Budget’ on Friday, Chancellor Kwasi Kwarteng attempted to crack down on the damaging strikes by introducing new legislation to ensure industrial action can only occur when discussions between companies and unions “had truly fallen down.”

In addition, trade unions will be required to put compensation proposals to a vote among their members.

Mr. Lynch criticized the chancellor’s proposals, stating, “Mixed signals are being sent.” Perhaps it is “good policeman, bad cop.” We must negotiate our way out of this situation.

The gathering follows the announcement by RMT union leaders that 40,000 National Rail and 15 train operator employees will strike on October 8. In June, he is spotted with demonstrators.

The staged walkouts will impact travel to and from the Conservative party conference in Birmingham, scheduled for October 2 to 5.

Runners hoping to attend the London Marathon on October 2 will also be affected by the strikes, since routes into and around the city will be disrupted.

In a separate dispute over compensation, RMT members employed by contractors that clean Avanti West Coast trains will go on strike for 24 hours on Friday.

A planned strike by drivers on September 15 and 17 has been canceled out of respect for the late Queen.

Mr. Lynch, general secretary of the RMT Union, stated that the strike of train employees during the formal mourning period has been “suspended” as the union joins “the entire nation in paying respects.”

He said, “We offer our most sincere condolences to her family, friends, and the nation.”

Thousands of workers in the rail, telecoms, legal, and postal industries went on strike over pay and working conditions during the summer.

In a dispute over Legal Aid payments, criminal barristers have initiated an indefinite strike, and postal workers have also gone on strike, with another 48-hour walkout planned for later this month.