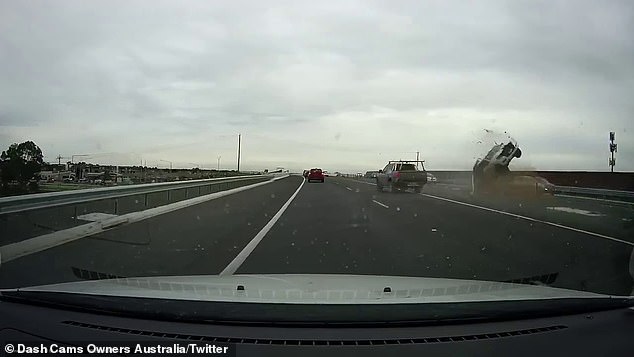 After hitting another car on a busy highway, a Ford Ranger rolled twice over a median strip and into oncoming traffic.

Dashcam video from the incident on the Mornington Peninsula Freeway in Aspendale Gardens, Melbourne, last Wednesday was dramatic.

Despite the car rolling many times, the 36-year-old driver miraculously avoided the hospital. Instead, he was issued an infraction notice for failing to yield.

Before 9am, the red and white ute was moving north in the left lane when it signaled right and changed lanes.

A black Mitsubishi Triton was moving in the right lane at the same pace when the ute moved in front of it.

Prior to flipping twice over the grassed median strip, the Ford Ranger collided with the Triton.

The contents in the rear of the automobile were propelled into the air by debris from the rolling vehicle.

Then, as fast-moving cars were passing on the other side of the highway in the opposite direction, the automobile fell on its side.

The driver of the Triton stomped on the brakes and kept the vehicle upright on the asphalt, preventing more fatalities.

In the crash, nobody was hurt.

The driver of the automobile that had turned over at the site was treated by paramedics.

On Sunday, the horrifying image was shared on social media, and opinions on which motorist was to blame for the collision varied.

“Do you think they’ll ever attempt to push in again?” One person wrote, “Springvale Road Overpass in Melbourne VIC.”

One user said, “I don’t know about the Australian speed limit, but the right lane driver is definitely incorrect.”

The right lane is for passing only. If the speed limit on the highway is less than 90 km/h, you may sit in either lane and overtake in either.

Another person echoed this sentiment, saying, “The red Ute driver plainly knew the black Ute was there, they simply expected them to move out of their way, (entitlement)”.