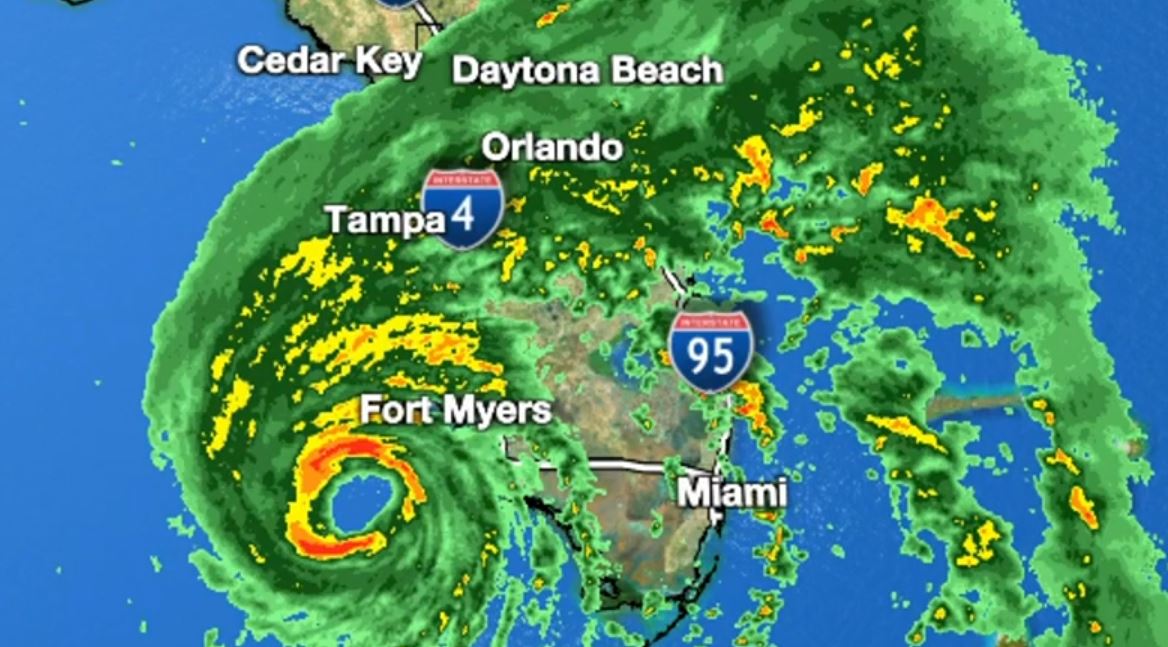 The location of Hurricane Ian as of 8 p.m. EDT on Wednesday, September 28.

More than two hours after making landfall in southwest Florida, Hurricane Ian fell to a Category 2 storm, continuing to ravage the region with 105 mph winds.

According to the National Hurricane Center, Ian made landfall on the island of Cayo Costa, Florida, about 4 p.m. local time as a Category 4 hurricane with sustained winds of 150 mph. At around 4:35 p.m. ET, it struck the mainland with winds of 145 mph.

At 10 p.m. EDT, the storm was located forty miles northeast of Punta Gorda, Florida, and eighty-five miles southwest of Orlando. The next update will occur at 11 p.m.

The eye of the storm was preceded by “catastrophic” winds and storm surge, and it is projecting hurricane-force winds up to 50 miles from its core. Ian threatens virtually the whole state of Florida with the possibility of tornadoes and significant rainfall of up to 30 inches, which could cause flash floods and river flooding.

The National Hurricane Center has issued a hurricane warning for a significant portion of Florida’s southwestern coast, from Chokoloskee to the Anclote River, as well as Florida’s eastern coast, from Sebastian Inlet to the boundary between Flagler and Volusia counties.

A storm surge warning is in place for the majority of the southwest coast of Florida, from the Suwannee River to Flamingo, and for northeast Florida from the Flager-Volusia county boundary to the mouth of the South Santee River in South Carolina, as well as inland along the St. Johns River.

The predicted path of Ian’s center into central Florida is Wednesday night through Thursday morning. It will certainly weaken as it goes inland, but it might regain hurricane-like strength as it approaches the eastern coast of Florida. On Friday, Ian is then slated to go north to Georgia and South Carolina.

The Florida Division of Emergency Management has issued mandatory evacuation orders for thirteen counties in Florida.

Tuesday, Ian had already pummeled western Cuba before rapidly intensifying over the Gulf of Mexico. Before crossing into Florida, the storm’s winds had nearly reached Category 5 levels.

Tropical storms and hurricanes are becoming more powerful, slower, wetter, and ultimately more destructive and lethal as a result of climate change.