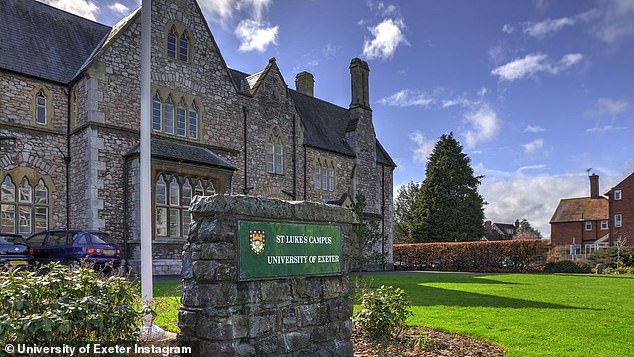 A lecturer has been ordered to pay more than £5,000 after he tried to sue a Russell Group university for sexism because it held a domestic abuse seminar.

Dr ZhiMin Xiao was offended by a University of Exeter conference about violence against women which featured high-profile speakers including an MP and senior police officials.

The academic, who at the time was in the midst of a messy breakup and custody battle, insisted he was subjected to sexist discrimination by attending the seminar for 30 minutes.

This was because the university had invited speakers onto campus who assumed that males were the primary perpetrators of domestic violence, he said.

The lecturer’s ‘wholly unreasonable’ claims have been thrown out at an employment tribunal and he has been ordered to pay the University of Exeter £4,000 and Mrs Boddy £1,650 in costs.

At the time of the incidents last year, Chinese Dr Xiao was a lecturer in education and research at the University of Exeter’s Graduate School of Education and was still on probation.

In June 2021, he sat in on a conference titled ‘Tackling gender-based violence, what each of us can do’ which had speakers including MP Jess Phillips, Shadow Minister for Domestic Violence and Safeguarding.

A tribunal report from the hearing in Exeter said the issue was whether the university had invited speakers onto campus ‘who assume that males were the primary perpetrators of domestic violence’.

The ruling said: ‘[Dr Xiao said] attended the conference only for 30 minutes before having to go and collect his children.

‘He appears to be absolutely right that the theme of this conference was domestic violence against women. He claims that this subjected him to direct sex discrimination.’

Employment Judge Alastair Smail dismissed the sex discrimination claim. The judge ruled: ‘I simply do not understand that contention; it is a matter for the University to hold a conference on whatever topic it likes.

‘It does not arguably amount to any sort of discrimination against him. That allegation made by him has no reasonable prospects of success.’

Dr Xiao, an expert in ‘big data’ and ‘research methodology’, also tried to sue co-worker Mrs Boddy, an associate research fellow at the university who was also based at St Luke’s Campus.

Mrs Boddy had struck up a friendship with Dr Xiao’s wife as their children were friends at school.

When Dr Xiao’s marriage broke down in 2021, Mrs Boddy became concerned and took his wife and her children into her home for four months.

Dr Xiao said his children were ‘kidnapped’, however the tribunal heard his wife had requested to move into Mrs Boddy’s home.

Dr Xiao also claimed Mrs Boddy made ‘degrading comments’ about how he dressed and gifts he sent, saying it amounted to racist discrimination.

The tribunal heard Dr Xiao and his wife had been through family courts and that he was subject to a non-molestation order, which prevented him visiting certain ‘exclusion zones’.

Judge Smail threw out all his claims of sex and race discrimination as well as constructive unfair dismissal.

The judge said: ‘I have no doubt Dr Xiao has been under considerable pressure surrounding the events of the breakup of his marriage and the custody and contact issues concerning his children.

‘Those matters have been litigated, and as I understand it continue to be litigated, in the family courts.

‘That is the appropriate place for them. The attempt to bring the law of employment into that matter in my judgement fails.’

Ordering him to pay costs, the judge added: ‘These claims brought by Dr Xiao had no reasonable prospects of success and bringing them at all was wholly unreasonable.

‘(The university and Mrs Boddy) should not have had to deal with these claims.’

On his profile page for the University of Essex, it states: ‘In addition to methodological research and education, I am interested in child welfare, particularly in the context of trauma-informed and rights-based research into family injustice.’

Mrs Boddy has worked at the University of Exeter since 2002 and is Research Fellow for patient and public involvement in the University College of Medicine.