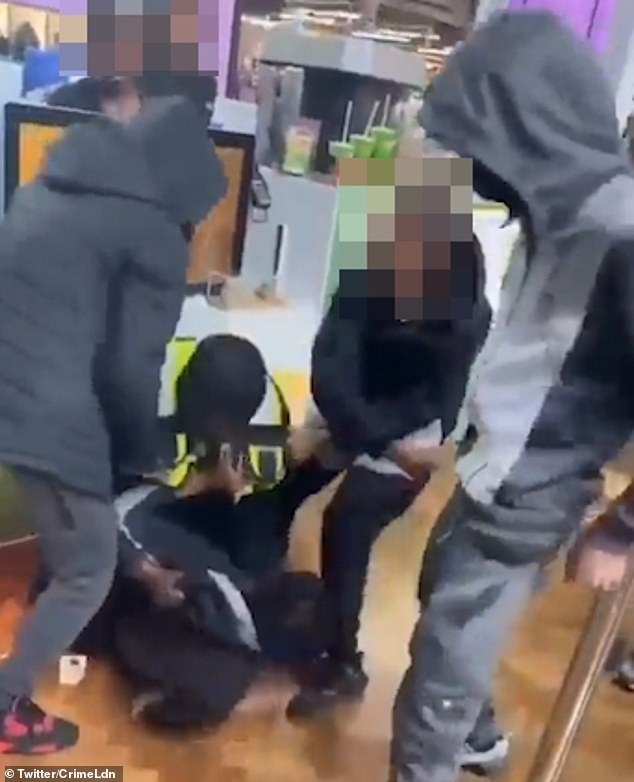 This is the scene of a violent shopping center riot in Lawless London as a JD Sports security officer punches and headbutts suspected shoplifters.

A terrible altercation at the Westfield Stratford City complex is captured on social media video.

The battle broke out in the mall in front of hundreds of onlookers, according to Westfield Stratford management, and was allegedly started by a “shoplifting incident” in JD Sports.

In video, a security officer is seen holding down a young person to the ground while being encircled by three other people.

One of the suspected shoplifters kicks him in the back after taking a couple swings at him from behind.

The JD Sports employee, however, headbutts one teenager before punching him on the ground. And despite the fact that his assailants outnumber him, the security guard effortlessly holds his own.

‘Unfortunately, after an alleged attempted theft incident inside JD Sports, a confrontation between a number of adolescents and the JD Sports security officer spilled out into the mall,’ Westfield Stratford City general manager Alyson Hodkinson told The Sun.

As soon as Westfield security personnel learned of the incident, they were on the spot to diffuse it.

“The safety of our patrons, merchants, and staff is of the highest priority to us. Our officers are trained to handle challenging circumstances and constantly attend training to preserve safety inside our malls at all times.

“We are meeting with JD Sports to talk about the incident and we will seek to see how we can share best practices with their team and continue to help merchants with security issues,” the statement reads.

According to a JD spokeswoman, “we are investigating into an altercation between five individuals and a security guard of a third-party contractor for JD Group at Westfield Stratford after suspected attempted stealing.”

We are unable to speak more on the matter at this time. We take all reported acts of violence very seriously since we do not support any kind of violence.

The safety of our coworkers and any third parties we employ is our first responsibility, and it should never be expected of anybody to put up with violence or abuse on the workplace.