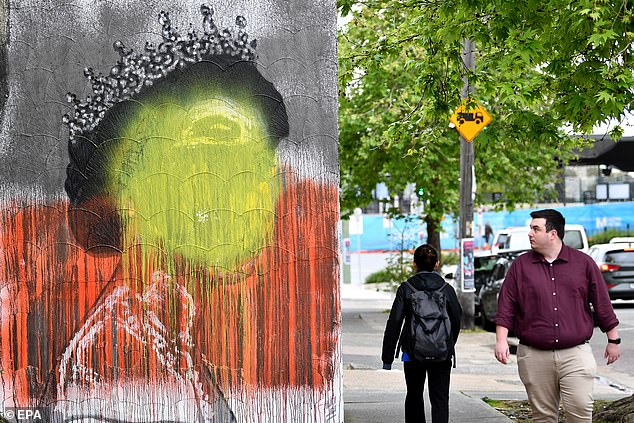 Following the Queen’s passing a week ago, large crowds gathered in Sydney and around Australia on Thursday to protest the monarchy and demand changes for First Nations people.

As part of the protests, activists spray-painted the Aboriginal flag over the Queen’s visage and covered a mural in inner-Sydney Marrickville.

With the red and black portions of the flag on top and bottom, O’Keefe said, “I say defiled, since the Queen’s face has been covered with yellow paint. It’s really insulting.”

He also said that by concealing the artwork, the activists were attempting to suppress history.

“This past has to be spoken and taught, and as a nation, we are making great strides in acknowledging and confronting this history,” O’Keefe said.

“I firmly feel that suppressing this history cannot go on, but we are discussing Queen Elizabeth,” you say.

These insulting statements only serve to further divide our nation on a day when she was just buried three days before.

Numerous people gathered in state capitals to hear talks on how colonisation has affected Indigenous Australians as protests continued around the nation.

Additionally, First Nations activists and friends set a British Consulate symbol on fire in Melbourne and torched an Australian flag in Brisbane.

Participants in the violent demonstrations demanded treaties, a republic, and the “decolonization” of Australia.