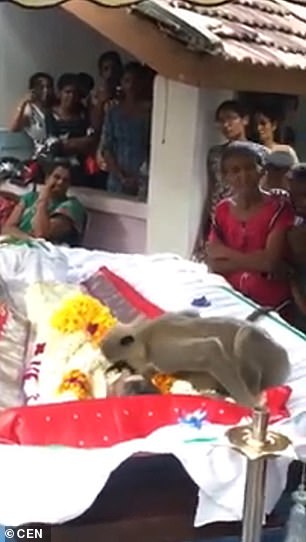 This is the poignant moment when a distraught macaque gave his human friend a farewell kiss and attempted to revive him at his burial.

Prior to his death, Peetambaram Rajan, 56, fed the wild grey langur fruit and cookies every day at his Batticaloa, Sri Lanka, forest-side home.

And when mourners brought the monkey to Rajan’s funeral, they were astounded by the strength of their attachment.

As the langur sat on the edge of Rajan’s open casket, it carefully cupped his chin as if trying to determine why his friend was so still.

A mourner at the head of the coffin captured video of the monkey attempting to embrace his human sponsor.

The langur leans over the casket and puts a kiss on Rajan’s face, as if attempting to lead him away or awaken him.

Eventually, mourners carefully remove the distraught monkey from the coffin.

On October 17, local media claimed that father-of-two Rajan died after an unexpected illness.

The video was released online and garnered hundreds of thousands of views, with netizens moved by the monkey’s reverence.

A social media user named ‘JP Mahanta’ remarked, ‘That man has earned the affection; if there is a heaven for people, he would be there without a doubt. Om Shanti.’

Wow, Maureen Donaghey exclaimed. Brought me to tears. And yet, it is commonly believed that animals cannot feel as we do.

Furthermore, “Beverly Fenton” remarked, “We are all related.”