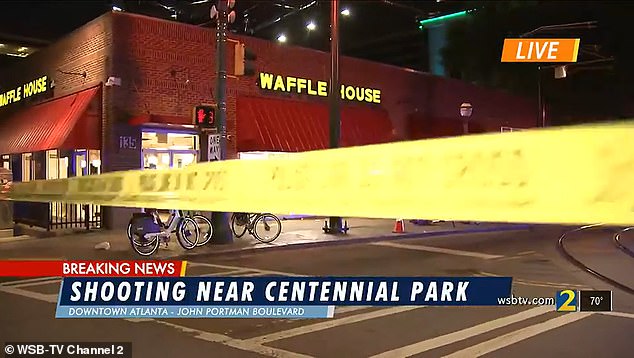 Five teenagers have been hospitalized after a shooting that took place outside a Waffle House in Atlanta’s Centennial Olympic Park.

The shooting took place just before 10 p.m., according to police, in the area of John Portman Boulevard and Centennial Olympic Park Drive in northwest Atlanta.

Authorities found three people shot after some type of altercation that may have been a carjacking, Deputy Chief Timothy Peek said.

They later learned that two more victims had transported themselves to the hospital before authorities could arrive.

All five victims, a mix of males and females between the ages of 15 and 19, are in stable condition, according to Peek.

Police also said they recovered three firearms from the scene, as well as a stolen car.

Police in Atlanta have yet to uncover a motive, but noted the possibility of a carjacking and that there were 911 calls before the shooting of juveniles on scooters in the area.

‘We have not had the opportunity to determine whether they were directly involved with this incident but, of course, that will be a part of the investigation,’ Peek said.

‘There were a number of scooters that were on scene when we got here. Now, how they got here and who was using them, we’ll have to figure that piece out.’

‘Anything is possible at this stage,’ Peek said, not even clear if a shootout had taken place.

The incident is still under investigation. Police have yet to identify any specific suspects.

‘What we’ll say is that the investigators are certainly still working in turning over every leaf to determine what happened,’ Peek said. ‘All individuals thus far have been identified. Of course, based off the area surveillance, we will look to see who else we can identify that may have had some involvement with this shooting.’

While many cities have seen rises in crime in 2022, Atlanta’s numbers are actually down 1% so far, according to city data. Homicides, however, have increased 47 percent from 2021.

Coincidentally, this weekend marks the fourth anniversary of a shooting at a Waffle House in Nashville that killed four people.