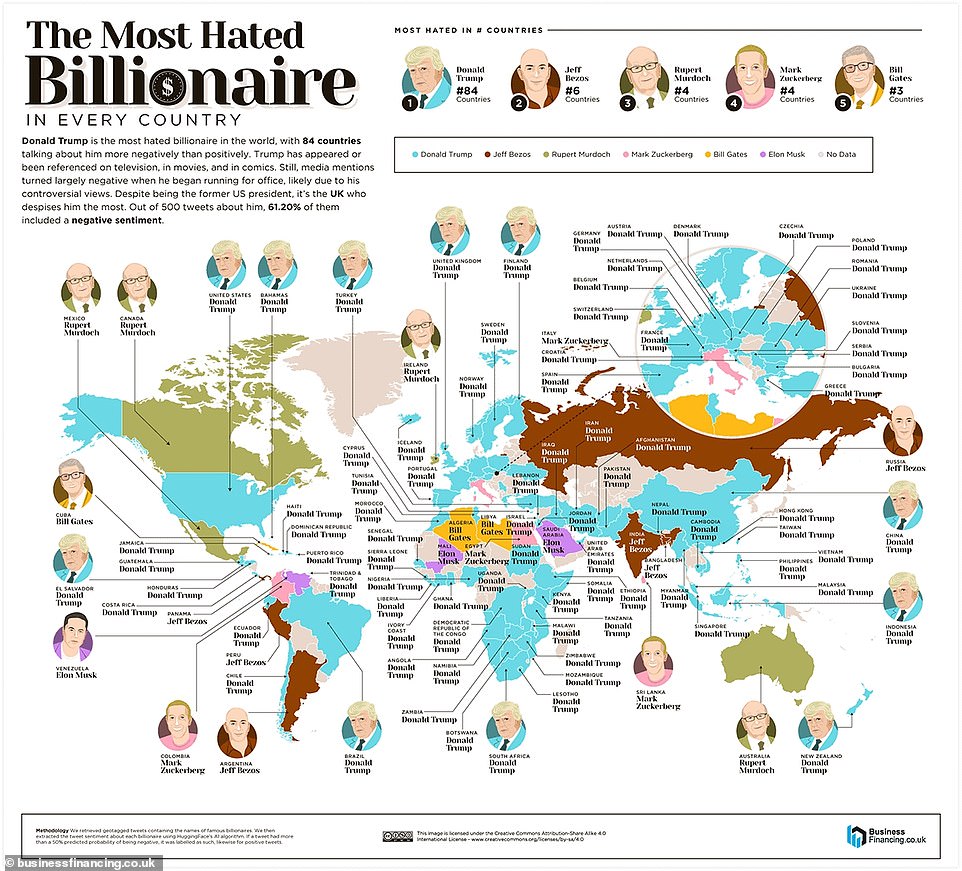 The most and least popular billionaires in each nation and US state were determined by Businessfinancing.co.uk, a website publisher that publishes research and information on company finance and lending.

They developed this system by collecting geotagged tweets that mentioned different billionaires and classified them by location. To establish whether each remark was favorable or negative, they then utilized an AI “sentiment detector.”

Elon Musk is regarded as the most popular person in 12 states, followed by Jeff Bezos with 10 and Bill Gates with 7.

There was no dispute as to which billionaire came out on top, with former President Donald Trump coming in first in the United States, 43 different states, and 83 other nations.

Everywhere from the United States to the United Kingdom to China, Brazil, Indonesia, Israel, and Kenya, Trump was regarded as the most despised billionaire.

Arizona, Florida, Georgia, Pennsylvania, Ohio, and Delaware were the only states where Trump wasn’t named the most despised politician.

Rupert Murdoch, chairman of News Corp., was ranked as the least regarded billionaire in five of six states, while Mark Cuban was oddly the most despised in Delaware.

Trump did not come in last among America’s northern and southern neighbors. Canada and Mexico had the greatest animosity for Murdoch. Sheryl Sandberg, the creator of Lean In, is the most well-liked billionaire in Canada, while Larry Page, the co-founder of Google, topped the list in Mexico.

With 37, Bill Gates was named the billionaire adored by the most nations, followed by Elon Musk, the CEO of Tesla, with 27 and Jeff Bezos, with 15.

Trump, Bezos, and a tie between Rupert Murdoch and Mark Zuckerberg for fourth place with four each, were all overwhelmingly despised in 83 of the world’s nations.

Most well-liked in at least one US state were Cuban, Bezos, Sandberg, Musk, Gates, Page, Branson, Warren Buffett, and Steve Ballmer.

Individually, Belize has the most favorable perceptions of Elon Musk, the wealthiest man in the world, at nearly 58 percent.

Mali has the most nasty comments against him, accounting for 38% of all tweets. Twenty percent of tweets regarding Musk are favorable in America, while 29 percent are unfavorable.

Regarding Trump, 57 percent of tweets in the US were critical of the previous president, while Suriname had a rate of 68 percent criticism.

Myanmar, where 44% of impressions praised the 45th president, received the majority of supportive tweets from Trump.

According to Business Finance, just 7% of tweets about Trump in America were favorable.