Skip to content
Home » News » News » Before police “managed detonation of package,” hundreds are moved away from Whitehall 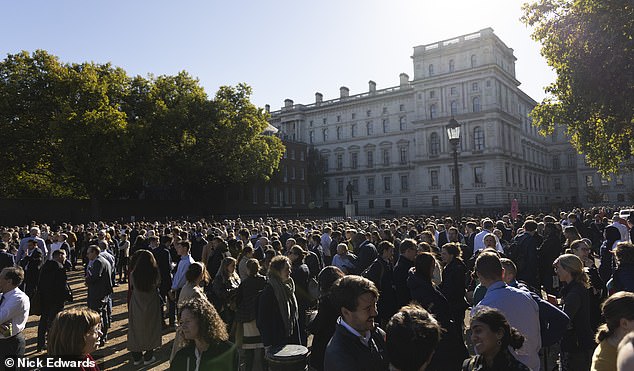 Police shut down Whitehall, trapping government workers inside No. 10, as hundreds of people were evacuated after concerns of a suspicious package close to Downing Street.

A government source stated that the government buildings along Whitehall in central London were empty, and hundreds of people were observed congregated at Horse Guards Parade, a popular tourist destination.

In response to concerns of a suspicious parcel, a police officer on the site verified that a road adjacent to Downing Street, the location of Prime Minister Liz Truss’s office and house, was blocked.

While the alarm was handled, officials and politicians were detained inside Downing Street and other government buildings for more than an hour.

After being examined by expert officers, the object has been deemed to be unremarkable.

A blast was heard when police used a bomb-disposal robot, which was captured by a Reuters photographer.

The road is reopened after an earlier restriction was removed.

The Foreign Office, the Cabinet Office, and the Ministry of Defense are just a few of the government agencies that are located in Whitehall, which is located between the Houses of Parliament and Trafalgar Square.

In one picture, it seemed like Chancellor Jeremy Hunt was being rescued.

The cordons that the police had previously erected did not affect the Houses of Parliament.

Such warnings are often issued for Whitehall, albeit they don’t always stay as long.

Police assistance at the location was verified by the London Fire Brigade.

There were two fire engines present.

Police were alerted to allegations of a suspicious package in #Whitehall at 11.42 a.m. on Tuesday, October 18, according to a tweet from MPS Westminster.

Officers are there, and a cordon has been set up out of caution.

Specialist officers will evaluate the item.

‘Pls stay away from the area.

‘Special police have evaluated the item at #Whitehall and it has been classified as non-suspicious,’ they wrote in an update.

“The barricade has been removed.” I appreciate your patience.

»Before police “managed detonation of package,” hundreds are moved away from Whitehall«